Make A Donation Click Here >
Home › What We Believe › Angels 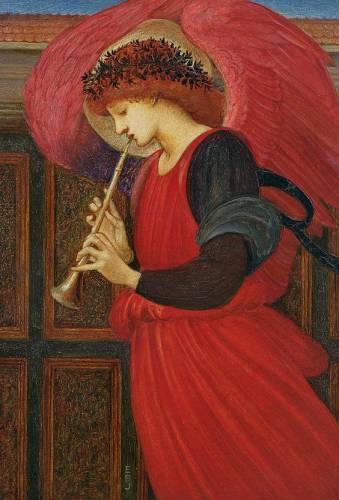 The Angel of the Trumpet by Sir Edward Burne-Jones (1833-98). © The Bridgeman Art Library International, Ltd.

The past decade has seen a phenomenal rise of interest in angels. The evidence for this is displayed on television, the Internet and jacket lapels; and in book stores, films, women’s magazines, magazines devoted to the topic of angels, The New York Times, gift catalogs and greeting card stores.

We cannot tell the extent to which members of the Presbyterian Church (U.S.A.) share in this “angelmania.” Various surveys of Americans conducted between 1992 and 1994 estimated that roughly 67 to 76 percent believe in angels.(1) Presumably some of this rather sizable population are, indeed, Presbyterians. But angelology has not traditionally been emphasized in the Reformed churches, leaving Presbyterians few tools with which to measure and assess the abundant and often wild claims presently being made on angels’ behalf. A short course is therefore in order: what do the Bible, the confessions and Reformed theologians say about angels?

The writers of the Bible take it for granted that there is a realm called heaven. In that realm God sits in glory, surrounded by other divine beings. Biblical writers assume, moreover, that the heavenly realm is near to our hands and hearts. Heaven intersects with earth at key places and key moments in the life of the people of God. At such key moments God’s heavenly messengers, God’s celestial soldiers, and at times even God venture forth from heaven to work and to be seen on the earth.

Jacob witnessed such an intersection of heaven and earth in his dream at Bethel: “He dreamed that there was a ladder set up on the earth, the top of it reaching to heaven; and the angels of God were ascending and descending on it.” And he was afraid, and said, “How awesome is this place! This is none other than the house of God, and this is the gate of heaven” (Genesis 28:12, 17).

The diversity of Biblical portrayals makes it hard to generalize about “the biblical view of angels.” But many modern authors who survey biblical depictions of angels overlook the diversity. They often assume that all Scriptural teachings are consistent; what is said of angels in Genesis can be used to shed light on what is said in Hebrews, and so forth. Such an approach leads to an impoverished understanding of what the Bible actually says on this complex topic.(2)

Ideas about angels evolved over the centuries as the Bible was being written, and continued to change after the closure of the biblical canon. Many medieval theologians, including Thomas Aquinas, wrote at length about the nature of angels and about features of the angelic hierarchy. But John Calvin, along with other Reformation thinkers, rejected such teachings as so much speculation. Calvin admonished readers not to concern themselves with details about the creation, nature and functioning of angels that Scripture has not given us to know.(3)

Calvin did, however, insist on the reality of angels, whom he described as “celestial spirits whose ministry and service God uses to carry out all things he has decreed” and as ones in whom “the brightness of the divine glory” shines forth richly. He fully accepted Scriptural testimony that God uses angels to protect those God has undertaken to guard.

But Calvin doubted the existence of individual guardian angels (finding little biblical evidence for them), and doubted also the usefulness of such a doctrine: “For if the fact that all the heavenly host are keeping watch for his safety will not satisfy a man, I do not see what benefit he could derive from knowing that one angel has been given to him as his especial guardian.”

Calvin also expressed concern that humans too easily drift toward belief “that angels are the ministers and dispensers of all good things to us.” Such a view leads to our regarding angels too highly, even worshiping them. “Thus it happens that what belongs to God and Christ alone is transferred to them.” Calvin’s warning, which is paralleled in several of the brief references to angels found in the confessions(4), is appropriate in today’s era of widespread angel-adoration.

Today some Christian authors imply that since angels were a part of “the worldview of the Bible,” they must also be a part of our worldview. But a goal of duplicating “the Biblical worldview” (on this matter or any other) is unrealistic. Even those who claim to do so do not: for example, such persons do not share ancient views of the construction of the human body, of disease transmission or of the nature and operation of the planets and stars. We must decide which elements of the biblical texts are central for our faith and obedience. The creeds and confessions of the church, which serve as our best guides in this endeavor, center, not on the reality or purpose of angels and other spirit beings, but on God’s reconciling work in Jesus Christ. We need not believe in angels in order to be a faithful and devoted Christian.

On the other hand, believing in angels does not indicate that a person is naive or illogical. Angel-belief may actually be the mark of a mind that values consistency; the same arguments used to discredit belief in angels may be leveled against God, the resurrected Jesus and the Holy Spirit.

Some theologians of the previous generation recognized this potential problem of inconsistency and tried to describe even God’s reality and presence in ways that did not conflict with what scientists say about the world. But in today’s (post-modernist) era, theologians have begun to see how belief in the truths of science need not exclude belief in God’s creative work in the world. God is indeed outside or beyond the created order, but God is also radically present with us — and free to work through any means, including through powers that we call angels. There is, finally, a mystery about God’s working in our world that we can never resolve.

The angels (and fallen angels) of modern pop culture fill many different roles: for example, as agents of healing and messengers of truth, as bearers of divine presence, as beings who lust for human pleasures, as evil spirits who seek to lead us astray, as guardians who protect us from physical harm, and as guides who lead us into another realm at the time of death. But most of today’s popular representations of angels have little to do with angels as depicted in the Bible (or in the Book of Confessions). This divergence from biblical views is as true for the depictions by some fundamentalist “angel experts,” such as novelist Frank Peretti, as it is for the works of so-called New Age authors.

Because so much has been written and said about angels, from so many perspectives, generalizing critiques often miss their mark. But one recurrent problem is the popular portrayal of angels as beings sent to cater to our every need, rather like fairy godmothers or exceptionally competent psychotherapists. Another recurrent problem is a lack of attention to angels’ role, seen throughout the Bible, of calling us to obedience and worship, or to sacrifice and service on behalf of God’s people.(5)

In the Bible angels show us that God is both near to us and also beyond or hidden from us. The story of Jacob’s wrestling with the angel makes both of these points well: in the person of the angel God comes near to Jacob, who demands a blessing and afterward says, “I have seen God face to face, and yet my life is preserved” (Genesis 32:30). But the mysterious being was not God, or at least not God in all God’s fullness and glory — the figure is introduced in the story simply as “a man” (even the word “angel” is not used, but cf. Hosea 12:3-4).

The angel or some other mediator is necessary, in the biblical view, because no mortal can look upon God’s face. God is too vast, too holy, for our feeble human minds fully to comprehend. Hence, as Calvin argued, God relates to us in ways appropriate for us. Angels are divine messengers in whom the full power and glory of God are tempered so as not to overwhelm us. The angels convey that God is present with us finite human creatures, concerned about our welfare, and willing to intervene to set persons on the right path. They demonstrate God’s willingness to meet us where we are.

Susan R. Garrett, professor of New Testament at Louisville Presbyterian Theological Seminary, is currently writing a book about angels in the Bible and in popular culture. This article first appeared in the April 2000 issue of Presbyterians Today.

(1) The polls are discussed by Robert Wuthnow in After Heaven: Spirituality in America Since the 1950s (University of California Press, 1998), in a very informative chapter entitled “Angel Awakenings.”

(2) Ideas about angels changed over the course of the biblical era partly due to developments internal to the life and thought of the people of Israel, and partly in response to outside influences as the people came into contact with other cultures. The evolution of biblical ideas about angels is complex; for a good overview, see Carol A. Newsom and Duane F. Watson on angels in the Old and New Testaments (respectively), in the Anchor Bible Dictionary, vol. 1.

(3) Calvin’s major discussion of angels is found in his Institutes of the Christian Religion, 1.14.4–12; all quotations above are taken from this section of the work (Westminster Press, 1960). In 1.14.13–19 Calvin goes on to discuss Satan and “the devils,” whom he views as fallen angels.

(4) The only substantive references to angels in the confessions are found in the Westminster Confession and the Larger Catechism. Topics addressed include the fall of some angels and perseverance of others according to God’s plan of election; the prohibition against worship of angels; and the certainty that angels (like humans) will one day be judged (see passages cited in the index to The Book of Confessions, under “angels”). There is also a brief reference to the fall of some of the angels in the Second Helvetic Confession (5.033).

(5) Good critiques of the portrayal of angels in recent popular culture include Trudy Bush, “On the tide of the angels,” in The Christian Century, March 1, 1995; Timothy Jones, “Rumors of Angels,” in Christianity Today, April 5, 1993; Ruth Shalit, “Quality Wings” in The New Republic, July 20–27, 1998. Some excellent scholarly articles on angels and Christian theology are found in the October 1994 issue of Theology Today, which was devoted to the topic.