Who could forget the devastation after Hurricane Maria swept across Puerto Rico in 2017? Certainly not Mimita Nieves. Eighteen months later she was still living without electricity.

Mimita did the best she could. She got along on canned food and powdered milk, and fresh vegetables when she could get them. She cooked on a small propane stove and  lit her home with solar lights that she charged during the day. A friend lent her a  battery-powered radio that served as her main source of information. 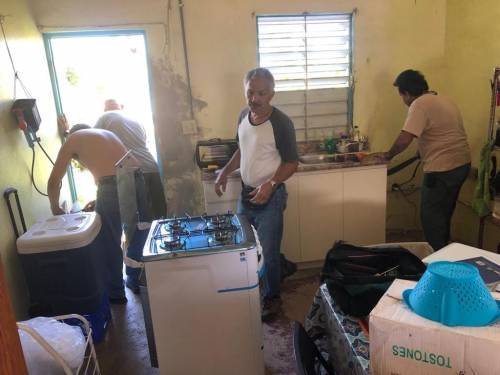 The hurricane wrecked the electrical grid across Puerto Rico. Complicating things for Mimita, the storm also destroyed her home’s electrical wiring. Mimita lives on Vieques [vee-ek-es], a small island eight miles east of the Puerto Rico mainland. No highway connects the mainland and Vieques, so most transportation for both people and cargo to the island is via ferry boat or airplane. Due to its lack of accessibility, Vieques lagged behind in the restoration of housing, infrastructure and basic services.

Her situation did not change until the day Presbyterian volunteers knocked on her door. The volunteers replaced her electrical system with one much safer and more  durable, built her a new fence and hauled away storm debris that had been in her yard for months. One Great Hour of Sharing gifts provided the materials they used to make the repairs. As a senior citizen with limited income, Mimita never would have been able to afford a contractor to do the work and feels blessed for the help she received.

When her lights came on, Nieves was overcome with gratitude for Presbyterians. “I cried,” she says. “I got down on my knees and I cried.”

Mimita’s house also got a much-needed roof installed by an organization called Hope Builders, an organization which will now be able to rebuild more roofs in Vieques using gifts to One Great Hour of Sharing.

One Great Hour of Sharing gifts are also are at work in impoverished communities in San Juan, Puerto Rico’s capital and largest city, helping organizations like the G-8, a community-based nonprofit group. The G-8, has rebuilt more than 100 roofs in eight communities near the Martín Peña Channel.

A sister organization to the G-8, the Martin Peña Channel Land Trust, has taken even more steps to protect the residents. The land trust acquired the property and residents are applying for surface-rights deeds to their houses.

The programs supported by One Great Hour of Sharing—Presbyterian Disaster Assistance, Self-Development of People and the Presbyterian Hunger Program—unite us in caring for the hungry, the weak and the vulnerable. Together, we work to become as Isaiah said, “repairers of the breach, restorers of streets to live in”—for as we always say, if we all do a little, it adds up to a lot.

May your restoring grace and power to repair overwhelm destruction and undo all harm. Make us instruments, through the gifts we make this day, in meeting the needs of those who suffer. Amen.

For more information and resources related to the One Great Hour of Sharing offering, visit pcusa.org/oghs.
This post is based on the minute for mission script which can be found on our website as a script.