Coming Together Across Denominations

Though they come from a small town, the seven young women who are part of the Rowley Youth Group won’t let this limit them from making a big impact in their community and around the world.

Coming Together to Support Mission

Earlier this year, the youth group contributed nearly $900 to the Presbyterian Giving Catalog, giving items such as a livestock, farming tools, and an emergency life pack. They chose to give in this way because they felt it important to support the work of one of their churches in mission. They also appreciated that the catalog provides a variety of options for giving. The youth generated support for their effort by holding an annual Valentine’s Spaghetti Supper fundraiser where they both prepared and served the meal to the community. 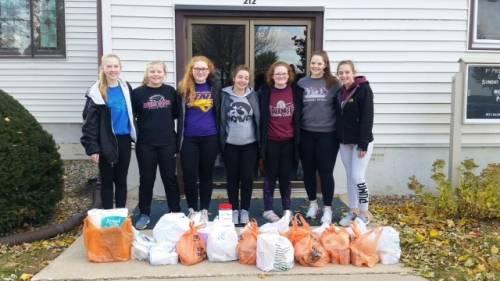 The Rowley Youth Group trick-or-treating earlier this year for the local food pantry.

When asked what drove the youth to select the items they chose to donate, Pastor Linda points to the rural background of the youth and their knowledge of the practical needs of farmers, as well as the influence of the local Future Farmers of America group. She adds. “The piglets were partly chosen because of their cuteness and the chickens were chosen partly because of the attraction of giving animals that would be companions. But foremost, when the youth read the Catalog, they chose the items based on how the description convinced them it would do the most good for the most people over the longest time. When asked, this was the one thing everyone agreed had been their guiding principle.”

In addition to these mission efforts, the ecumenical youth group also assembles shoeboxes for Operation Christmas Child, goes “trick-or-treating” for the local food pantry, and rings the bells (while singing carols) for the Salvation Army outside the local grocery story around Christmas. This small group just goes to show that when people come together, they can make a big impact!

We are always encouraged to see young people engaging with the Presbyterian Giving Catalog! If you think this is something the youth in your church would like to do, but don’t know quite how to get started, reach out to us at PresbyterianGifts@pcusa.org to schedule a call with a member of our team.