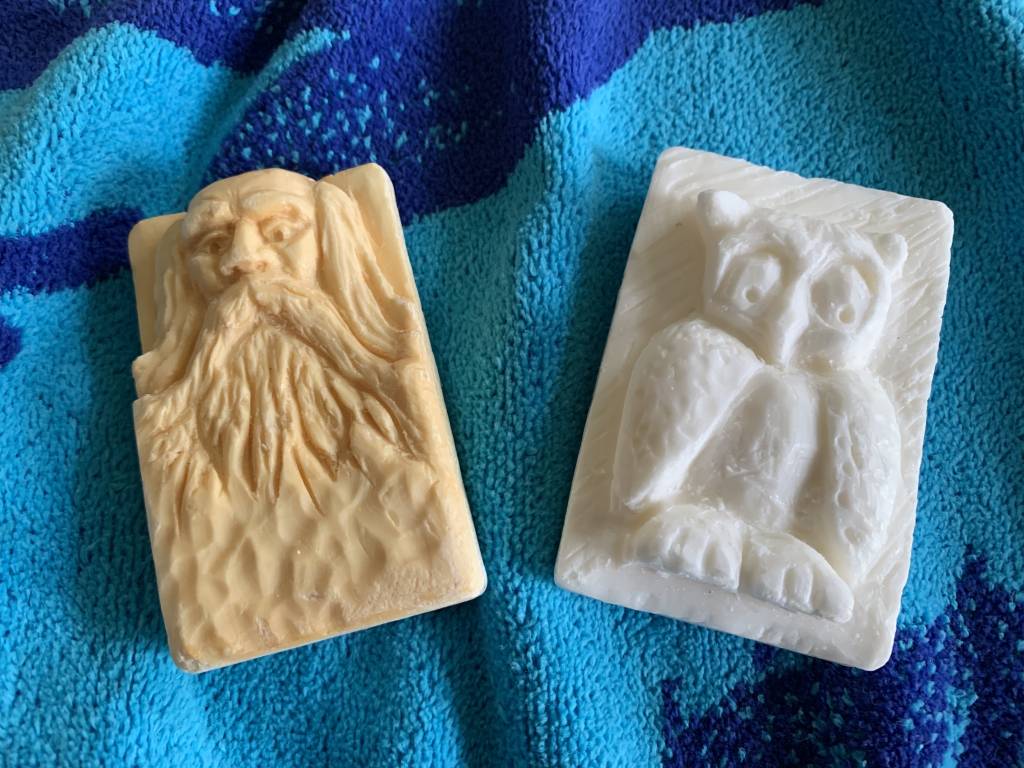 Our church throws a block party

Last Friday I coached soap carving. Our church (http://www.ankenypcusa.org) was throwing an outdoor block party for our neighborhood — hot dogs, a bounce castle, donuts made to order, even a fire truck. One of our neighbors offered to play guitar and sing, so we had live music, too.

In the craft area, beside the friendship bracelets and the flowers cut from muffin papers, I set up a card table topped with a beach towel and sharpened ice cream sticks and 44 bars of Ivory soap. As a sample, I brought a piece I had done years ago, a balding man with a Rip Van Winkle beard, carved from a single bar of soap.

I set the beard-man out on the table, and got started on an owl. I also had a few patterns ready for use: a star, a car, a turtle, the owl, and a fish.

A middle school sister and her early elementary brother stopped to see what I was doing. I showed them the owl in progress, and asked if they would like to give soap carving a try. They thought they would, so I gave them each a bar of soap and invited them to pick a pattern or make their own design.

After they traced around the pattern with the sharpened ice cream stick, I showed them how to use the edge of the stick to scrape shavings off the bar and lower the background. When that was done to their satisfaction, I demonstrated rounding over the raised design and adding some details. The last instruction was to carve their initials on the back of the soap.

Before the first two had finished, some more kids arrived. I passed out soap and carving sticks and got them started. And so it went through the two and a half hours of the party, and so I began to meet some neighbors.

The adults stopped by and admired the creations, but it was the kids who were willing to try something they might not be good at. After a couple of hours we had made quite a pile of chips and shavings. Soap scent and frying donuts, that’s my nose memory from the party.

I salute the courage of the organizing teams. They hung invites on front doors for three or four blocks around the church. “Everyone welcome,” they said. But with such an open invitation and with no RSVPs required, how do you plan the food?  How many hotdogs do you buy to feed a crowd of guests that might number 30 or 300?

Our congregation’s mission statement points us to sharing God’s love beginning in our own neighborhood. And when it comes to loving our neighbors, actually meeting them seems like a good place to start.

I can report that neighbor-meeting did happen at the block party, assisted by fire truck stickers, carmel apple donuts, and Ivory soap.

Ken Rummer writes about life and faith from the middle of Iowa by the High Trestle trail. Previous posts are available at http://presbyterianmission.org/today/author/krummer