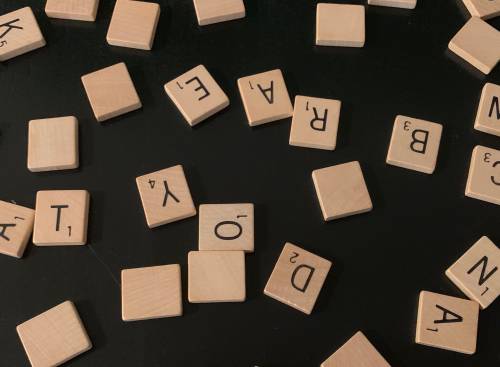 Scrabble tiles and a stuffed bird. The museum plaque identifies the artist as Phil Parker. I’m looking at an assemblage of objects presented in a shadowbox, and yes, that is a bird in there, and Scrabble letters.

The wooden tiles stand at attention on two half rings that project like tiaras. The letters on the upper ring spell out “SPOKEN WORDS FLY AWAY,” which no doubt connects with the stuffed bird on a perch.

Verba sounds like “verb” and the “a” makes a plural. It could be “words.” Maybe the first two words correspond with the upper letters. “Spoken words fly away.” But what about the other two words?

Scripta sounds like “scripture.” Written stuff. Written words. And manent? Very close to maneo, the Greek word for abide.  So “written words remain”? That would make sense of the typewriter key letters preserved under glass beads in the shadow box, and the little chain attached to the ankle of the bird to keep it from flying away.

It sounds like a proverb, life experience boiled down to a memorable phrase. Forming a business partnership? Buying a used car? Spoken words fly away but written words remain. So be smart. Get it in writing.

But I’m wondering. Do all the written words remain?

Aristotle wrote a book about comedy, but no copies have survived. Maybe it was a real hoot, but we’ll never know.

Clay tablets bearing written words remain from ancient Mesopotamia, but only the few unfortunate enough to have their buildings burn down around them.

These words I am writing now exist only as ones and zeros in electronic storage. Even when uploaded to the internet where posts are reputed to live forever, my words are still subject to loss by hack, by war, by natural disaster.

The great library of Alexandria is still being destroyed. So even written words may fly away.

In retirement, I wonder about the words I’ve spoken and written through the years. It may be the legacy anxiety talking, but will any of them remain?

What I’ve noticed is that sometimes words leave an impression on another person, like heron footprints in pond shore mud. So I’m watching for tracks. Even finding a few.

A listener mentions a bit of a sermon she still carries with her. A reader posts a comment of thanks for a thought that helped in a hard time. Tracks. They give me hope that something of my words survives.

The Scrabble tiles behind the glass declare that spoken words fly away. And, in spite of the little chain around the bird’s ankle, written words, too, can wander off. But sometimes words of both kinds leave a mark, a mud track baked hard in the sun.

My take on the art and the proverb? Writings and speakings flutter off. Word tracks on human hearts remain.

Ken Rummer, a retired Presbyterian pastor, writes about life and faith from the middle of Iowa by the High Trestle Trail. His previous posts are available at  http://presbyterian mission.org/today/author/krummer