Rising up for climate justice

Presbyterians share their thoughts from a recent climate march 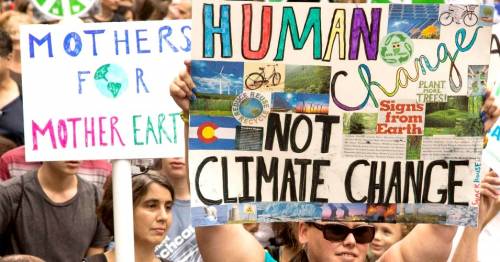 On September 8, tens of thousands of people gathered in marches around the world to walk with creation and for climate justice with Rise for Climate, Jobs, and Justice.  Here are the stories of three Presbyterians who joined this movement.

On Saturday, September 8, I marched with about 3000 people of faith (and 30,000 people in total) in interfaith contingent in the Rise for Climate, Jobs, and Justice. We were led by indigenous peoples and frontline communities, and the demands of the march were comprehensive:

It was exhilarating to walk with my colleagues from Green Faith, students from Pacific Lutheran Theological Seminary, with friends from the Bay Area, and so many Presbyterians. The march ended at the Civic Center with dozens of street murals in process and a resource fair. It was a joyful and prophetic time, and I was grateful to represent Presbyterians at that place and time.

We who are Presbyterian Christians joined the march from a long history of crying out for environmental justice.  We marched as people who will no longer stand for a world governed by corporations set on extracting resources at whatever cost.  We marched as people demanding a just transition to work and life that upholds the dignity and lives of workers and frontline communities.  We have no more time – climate chaos is here, and we will not be silent.

On a cloudy and misty morning, along the Ohio River’s shores, a group of approximately 40 people gathered at Heritage Station in Huntington, West Virginia, to attend a rally and participate in a march. Speakers for this event included a recently retired teacher and football coach, who also happens to be a spokesperson for Climate Reality. He informed us of the hope-filled news that we — collectively — are winning the struggle to move ourselves to a more sustainable future. Citing the incredible potential of the solar and wind industries to create jobs, while also creating power for a more livable planet, the Coach urged us to remain hopeful and continue to do what we can to work for the just and sustainable future we want for our children. He also encouraged everyone present to start dialogues with neighbors, family members and friends regarding why they believe Climate Change may be the most urgent issue facing our species.

Another speaker was a fisheries biologist, who is also an avid ocean diver. She informed those gathered of some grave problems that aquatic life, especially her beloved coral reefs are facing as ocean temperatures rise, and plastics pollution proliferates.  Her message was followed by an urgent plea to get involved on whatever level possible to resolve pollution and ocean warming/acidification.

A bright spot of hope was provided by a Solar Holler representative who informed the crowd that solar installations in the Tri-State area are proliferating, and there were free home evaluations and estimates available to anyone who wants to consider getting solar installed on their homes. She also informed us about specific legislative efforts that are necessary to truly promote solar as a growing and viable economic opportunity in our region.

Four Ohio Valley Environmental Coalition employees were involved in speaking at the event; Dustin White focused on Appalachian Storage Hub issues, I provided information on Ohio River Valley Sanitation Commission Pollution Control Standards changes, as well as a call out for people at the rally to contact their Governors to urge them to prevent these changes. Vivian Stockman and Natalie Thompson also provided information and presence during the rally. Several segments of the rally were livestreamed on Facebook Live. There were also several media reps there to take pictures, with stories in both the Herald Dispatch and MU Parthenon resulting from the event coverage.

MU Native American Student Organization also provided a presence and some musical offerings from their culture. This really energized the crowd.

Following the rally, participants were invited to march through the main part of downtown Huntington. Video footage of this march was taken by Dave Lavender and later shared on FB by several groups, as well as a picture he took of all Rally participants.

Why I felt it important to organize this event…

The rally took place a block away from the Ohio River – which is threatened with dramatically increased pollution right now from petro-chemical build up – the so-called Appalachian Storage Hub project. Ironically, some industry proponents have cited “weather trends” for why they want to have new petrochemical development to a more inland area. This project–if fully developed–will spur a second and third wave of fracking; the methane leaks alone from all the unconventional oil and gas build up will prevent the USA from reaching Paris Climate goals.

The tap water for the 5 million people who depend on the Ohio River for their source water intakes could be drastically threatened. My entire immediate family is in that group, as are all residents of Huntington (a town of approximately 45,000) – since both of our public water source intakes are on the Ohio River. The fact that tap water for 5 million people is in jeopardy due to all the issues discussed at this event was the primary concern for me, but I am also very concerned about the effects of Climate Change across our country and in other places around the planet. We desperately need an awakening of the human race to the realities of all the global and local climate changes taking place, primarily due to human use and extraction of fossil fuels. We are all connected here on this relatively small planet, and we had better learn to care for it together, or we will ultimately perish together!

I avoided the heat today.

I had that choice.

Many people in New York and around the world do not.

Activists in New York City held a march on September 6 as one of the Rise for Climate, Jobs and Justice actions organized by the Peoples Climate Movement. I planned to go. I contacted Emily Brewer of the Presbyterian Peace Fellowship and we planned a gathering place so Presbyterians in the city could meet and walk together.

I planned to participate in the march because of:

I planned to participate but … New York has experienced many hot and humid days over the last two weeks. Heat advisories have been issued on several occasions. I have ventured forth on such days sometimes for work but also for pleasure—I had the choice whether to go into the heat.

When I did, I learned that such weather takes a toll on me and has led me to recognize that I need to do long-term and short-term self-care.

The morning dawned, another hot, humid day developed. The weather demonstrated the need for the march and to address climate change. I pondered and prayed about what to do. I consulted friends.

Finally, I made the decision not to participate.

I stayed home, wrote letters to elected officials in New York City, Albany, and Washington, and did some other work.

I avoided the heat today.

I had that choice.

And because many people in New York and around the world do not have such a choice, I need to work to address climate change.