Which Is It? Science or Religion? 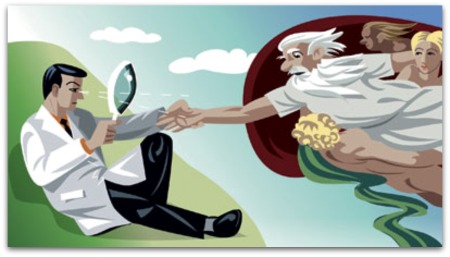 A Thought: Faith in science alone is a foolish myth. Faith in myth alone has is a fool’s science. Folly comes when we rely only on myth or only on science. Wisdom grows when myth and science clasp hands and lead us into deeper awe, gratitude, and grace.

Why is it always this OR that? Why can’t it be this AND that?

Two summers ago I was invited to a creationist lunch for local clergy. I told them, “You really don’t want me there.” They insisted, so I went. It was irritating. One pastor insisted that the account of creation was scientifically accurate. I challenged him: “You know, there really is no ‘dome’ or ‘vault’ separating the waters on earth from the waters in the heavens. And there is no ‘dome’ with stars in them.” He replied, “Well,… those are metaphorical descriptions.” Wait, what? It’s either metaphor or science. It can’t be both, especially if you’re claiming that the Bible presents scientific facts.

That same summer I had dinner with relatives in New England. To them, little in the Bible is true because it isn’t grounded in scientific proof. I challenged them: “So is love, which is constantly talked about in the Bible, real? It can’t be scientifically proven to be true?” The answer: “Well, no, because that’s something that can be proven through experience.”

Wait… what? We can’t arbitrarily accept one experience as valid and others as invalid simply because we’ve experienced one and not the other. Just because we’ve haven’t experienced God doesn’t mean that anyone who has is a fool. I also pointed out that science never really offers definitive truth, only probable truth (otherwise we would never have a plus or minus standard variation in statistics). And the more a truth is based on correlation rather than direct experimentation, the less we can be sure of that truth because we can’t prove a direct link, only an association.

Fortunately, the latter group really did want me there, so it was relatively easy to get off that topic and onto a more important discussion: why do our beloved the Pittsburgh Steelers keep losing to the New England Patriots (our answer: cheating!).

The well-known religious historian, Karen Armstrong, talks about our religion/science dilemma in her book, A History of God. She says that in ancient cultures, people valued two streams of thinking: mythos and logos. They saw both as revealing wisdom, truth, and God, but in different ways.

“Logos” is the root of logical thinking. Sadly, we Christians mistranslate “logos” as “Word,” which severely diminishes it. Ancient Greeks saw “logos” as a logical order that reveals the sacred and the holy in the structure of everything—plants, architecture, language, mathematics, and rational thinking. The fact that everything has a logical, and what they saw as mystical, order reveals God in everything.

“Mythos” provides insights that cannot be accessed through logic. Sadly, we dismiss mythos by calling it mere “myth.” For ancient people, myth wasn’t something untrue. It was a means to discover divine wisdom by peeling back the veil of the holy through story, music, drama, art, literature, symbol, and metaphor. For them, myth often revealed a truth that was deeper than logic.

When both come together the holy becomes tangible. For example, the Parthenon in Athens and the Temple in Jerusalem combined logos and mythos. Their architecture was based on the logos-inspired Golden Ratio of all structures—the roughly 5:3 universal ratio also found between tree trunks and branches, bodies and arms, and each nautilus chamber to a previous chamber. Yet both housed symbols and dramatic rituals that revealed God or the gods.

What’s wrong with us that we can’t balance mythos and logos? Creationists try to turn mythos into logos, and in their literalism strips the Bible of much of its deeper truth. Fundamentalist atheists try to give logos a mythic quality by claiming that only science can reveal true truth, since there is no truth other than empirical truth.

Christianity from the start held both logos and mythos in tension and balance. They understood that logic and story together accessed deeper truth. If we can’t use logic to understand myth, or the study of myth to deepen logic, we become shallow, superstitious fools, or arrogantly ignorant fools.

The struggle to find balance is what makes being Presbyterian so difficult. We strive to keep logos and mythos, rationality and story, empiricism and art, science and religion, law and love in tension and balance. We know intuitively that we find God in studying the Bible and science. To be a person of wisdom means to hold so many different perspectives in tension. Without the tension of mythos and logos wisdom shrivels because we limit our ability to discern God’s guiding voice in everything.