Make A Donation Click Here >
Home › Church › I do?

By Jeffrey A Schooley

That’s the average cost of a wedding according to www.costofwedding.com.

Who’s actually correct is meaningless because we are all wrong for participating in this system of sinful financial stewardship and consumption.

While our denomination has been ripping its heart out over issues of marriage, not a single overture has been put forth condemning such largess. I can only assume this is the case because liberals and conservatives in this debate only use those distinctions as a façade to hide their gross, capitalistic impulses.

In investigative journalism there’s an old adage: “Follow the money.” This is a shorthand way of declaring that the truth of any situation always centers around where the money is coming from and where it is going. Assuming this is true, what does the money spent on weddings in America tell us about what we actually believe about marriage? I think quite a bit. And each builds on the next.

Marriage is something we think we own. No one reasonably spends that much money on something they don’t feel ownership over. And this ownership mentality over marriage explains a lot about the vitriol we’ve witnessed in the debates around marriage in both church and society. Everyone has put a lot of green skin in the game and that sort of ownership will naturally morph into a sense of entitlement.

Marriage is a commodity – not a relationship. As capitalists, we have a fairly limited relationship with our commodities. They exist to bring us pleasure, comfort, and/or security. After that, they have no intrinsic value. I buy something so that I can use that thing to my desired end and, when it has completed its usefulness, I am freed (even encouraged) to discard it. 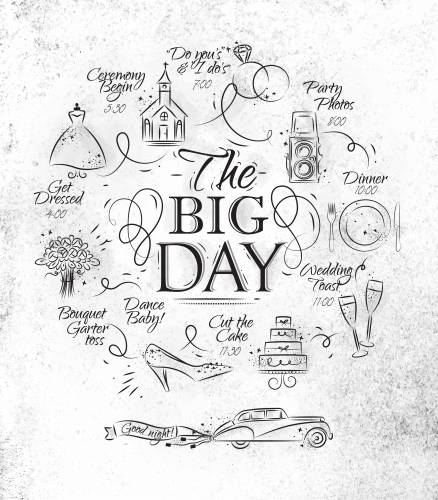 Marriage is temporary. Wanna know why divorce is on the rise? It’s not just pre-marital cohabitation, eased legal standards, the invasion of birth control in our conjugal lives, or any other simple culprit that could be easily eradicated. No, divorce is on the rise because our commodification of marriage instilled an implicit sense of the temporary.

In fact, there is no better indication of the transient, temporary nature of marriage than what is actually purchased with that $30,000 in each wedding. It is a long list of temporary items and services.

The church… temporary
(in many instances, couples join churches to have a venue and never return)

The list can go on and on, but you get the point. And it would really behoove us to ask what we thought would happen when we took what is supposed to be a permanent, life-long commitment and surrounded it with temporary products? Or, put differently, maybe for all our blow-harding about the permanence and integrity of marriage, the truth of what we really believe was always present in our purchases.

Yet, it doesn’t have to be this way.

The church is called to be a countercultural witness that points to the Lordship of Jesus Christ over every square inch of the creation. As such, our marriages can and should be a counterargument to these weddings. But they will never be so, of course, if we are complicit in the culture.

So, if you’re engaged and planning a wedding, allow me to chart a really radical course of action for you. I will confess that I, myself, did not even follow this course of action – but that is more a symptom of ignorance than hypocrisy. Given a chance to do it again (not that I want such a chance! Happy 9th Anniversary, Bri!), I would try my best to.

So, here is the Christian, countercultural approach, as best I can reason it:

Engagement. This is not the time to plan your wedding; this is the time to lay down a foundation for your marriage. Use this time to systematically, thoughtfully, and faithfully work through the most important aspects of your marriage. I recommend discussing time, sex, and money. These are most married peoples’ three favorite fights.

Wedding service. Hold it on a Sunday… in worship… at the church you attend together weekly. Our Book of Common Worship has a liturgy for just such a moment. Ideally it occurs after the sermon because this is the part of the Lord’s Day service in which we respond to the Word. Your marriage is a response to the Word in your life. This is the right place to put it in worship. Will your non-Christian guests find this weird? Yes. Will your Christian parents even find it weird? Probably. But your church will love the boost in attendance for one day and this might be the single most symbolically rich act of your wedding. Don’t forsake the faithful for fear of the odd.

Attendants. Keep it small. I know, I know. You want to honor every best friend and roommate you’ve had since you were six-years-old. And there’s family pressure to put your cousin from Arizona in your party. Listen. You can’t honor everyone with a title. It’s just impossible. Make it your goal, instead, to use your marriage to – at least in part – honor those in your life. A big title for a wedding, but a lessened relationship once you’re married is a terrible irony.

Attire. Wear something nice. Don’t buy something new. Definitely don’t spend thousands of dollars on something you’ll wear once, hermetically seal, and forget is in your parents’ attic until they move to a retirement home 28 years later.

Christians won’t dismantle a wedding industry that banks on excess and panders in the temporary. And there’s no need to feel guilt if you’re already married and bought into the cultural mindset. Grace covers that. But what the church says about marriage will mean a whole lot more if we actually behaved differently from the rest of society. Until the church – until our denomination – can figure out how to do this, our every decree and decry around marriage is meaningless.

Jeffrey A. Schooley is a teaching elder at Center Presbyterian Church in McMurray, Pennsylvania. He is also a PhD in Theology cand

idate at Duquesne University in Pittsburgh. Biking, Netflix, reading, teaching, and spending time with his wife and dog round out the rest of his life. He can be reached at ThinkLikeChristians@gmail.com.