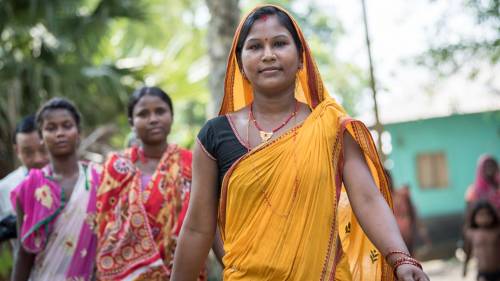 Photo courtesy of the World Association for Christian Communication

LOUISVILLE — Whether it’s reporting the news, anchoring a broadcast or providing expert input into the story itself, women are making “glacial” but generally steady progress in news markets across the nation and around the world.

A panel on the Global Media Monitoring Project moderated by Susan Jackson-Dowd, the executive director of Presbyterian Women, presented some of the preliminary findings last week during an online workshop offered during the joint conferences of the Associated Church Press, Religion Communicators Council and the Canadian Christian Communicators Association. Watch the 71-minute workshop here.

Jackson-Dowd appeared from Louisville. Lee is based in London, and Macharia in Nairobi. Dharmaraj joined the call from New York City, and Cusi from Toronto. The Rev. Gregg Brekke, executive director of the Associated Church Press, introduced the webinar from Washington state.

According to webinar material, more than a quarter-century has passed since the first global media monitoring that sought to understand gender differences in portrayal, representation and the voices of men and women in the mainstream news media. The GMMP report, “Who Makes the News?” is scheduled for release in June. The report will look at the extent to which gender inequality persists as well as how women fared during the pandemic.

Macharia said more than 100 countries participated in the 2020 GMMP. The past five years since the last report have demonstrated “incremental changes toward parity, but the pace of change remains glacial,” Macharia said. One example: when health specialists were interviewed about COVID-19, 1 in 3 around the world were women.

Asked how the GMMP is relevant to faith communities, Dharmaraj said that “human flourishing is at the heart of religion” and that “religion and culture play important roles in gender justice issues.”

“If the voices of those adversely affected are heard, if the issues are named and the vulnerable themselves are identified as agents of change, we can work together for the collective well-being of our communities,” Dharmaraj said.

“It’s easy for us to look outward and criticize secular media,” Lee said, “but it’s incumbent on us to look inward and identify where are the problems in our own input.” Lee called gender justice “a long-standing issue, and as was the case with HIV/AIDS and COVID-19, it comes back to behavioral change. It’s important that faith leaders pick up the findings of the GMMP.”

Macharia said that past reports have made “an important mark at the international policy level. The hard data crystalizes discrimination against women.” Data from the GMMP is used by groups including the United Nations’ Commission on the Status of Women and media educators around the world. “Gender balance,” Macharia said, “allows media audiences to see the whole picture. All stories need to be told from the perspectives of everyone affected.”

“It’s easy to imagine once [the GMMP] is concluded, you publish the report and it’s put on the shelf,” Lee said. “We’ve got to pull it down from the shelf and do an immense amount of grassroots work as follow-up. … We are about constructive dialogue, and we are also in a rapidly-changing and largely unregulated environment.”

Asked during a question-and-answer session following the presentation about the most compelling finding in the report, Dhamaraj said it’s that “women are survivors in spite of what’s going on. They didn’t come out as victims.”

According to Macharia, an increasing trend is women “creating their own media to have space to reflect their own voices, moving away from the mainstream to the margins,” although “that shouldn’t be the answer. Women’s presence has increased very slowly.”

On the other hand, Lee said, for decades starting a newspaper or a local television station has been cost-prohibitive. “Now, with digital platforms, the positive side is it is far easier for women to set up their own channel that looks at things differently than traditional media.”

“You cannot be,” Macharia said, “what you cannot see.”

Gender minorities are also measured in the report, Macharia said, and are less than 1% of the people who are being studied. “That’s not to say they aren’t important,” Macharia said. “It’s also about under-representation.”

The Global Media Monitoring Project’s most recent report, “Who Makes the News?” will be published in June at whomakesthenews.org.