#GivingTuesday – Join the PC(USA) in responding to a world in need! Give now!
Make A Donation Click Here >
Home › World Council of Churches elects new presidents

Serving North America will be the Rev. Dr. Angelique Walker-Smith of the National Baptist Convention, USA 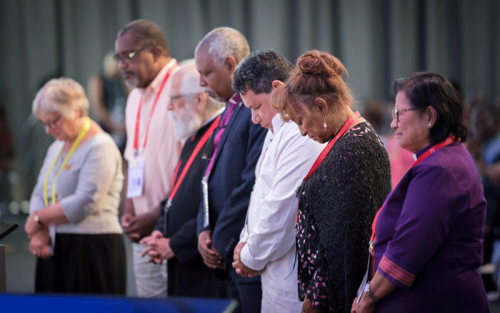 Delegates to the World Council of Churches’ 11th Assembly pray for the new presidents on Monday. (Photo by Albin Hillert/WCC)

Among the delegates are Dr. Dianna Wright, director of ecumenical and interfaith relations in the Presbyterian Church (U.S.A.)’s Office of the General Assembly; the Rev. Dr. Neal Presa, presently serving New Brunswick Theological Seminary in three roles and the moderator of the 220th General Assembly of the PC(USA), held in 2012; and the Rev. Amantha Barbee, senior pastor at Oakhurst Presbyterian Church in Decatur, Georgia.

According to the WCC Constitution, the role of the WCC presidents is to promote ecumenism and interpret the work of the WCC, especially in their respective regions. The presidents are ex-officio members of the WCC Central Committee.

The Rev. Dr. Angelique Walker-Smith of the National Baptist Convention, USA, Inc., will serve as president for North America. Walker-Smith is the national senior associate for Pan African and Orthodox Church Engagement at Bread for the World based in Washington, D.C.

She has been ecumenical representative for the National Baptist Convention, USA, Inc. and is a current member of the WCC Central Committee and is engaged in work of the National Council of Churches in the United States. She is also president of the Historic Black Church Family of Christian Churches Together. She also served as initiator of the Pan African Women of Faith Ecumenical Empowerment Network.

Wright noted that Walker-Smith has received “many awards and recognitions,” including from former President Bill Clinton, former U.S. Senator Richard Lugar, R-Indiana, and from her two alma maters, the Yale University Divinity School and Kent State University. She received her doctorate from Princeton Theological Seminary.

In 2014, then-Indiana Gov. Mike Pence presented her the Sagamore of the Wabash award. She served as the first woman and first person of African descent as executive director and minister of the Church Federation of Greater Indianapolis and was the assistant chaplain to women in prison at the Indiana Women’s Prison. 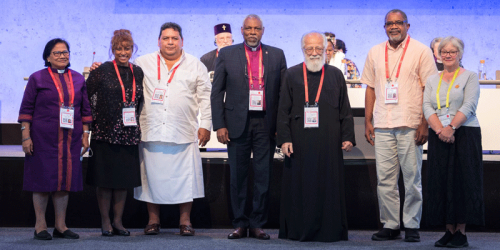 Also elected presidents on Monday were: