More recently, Grimké, Blake and others have done loads of reparative work 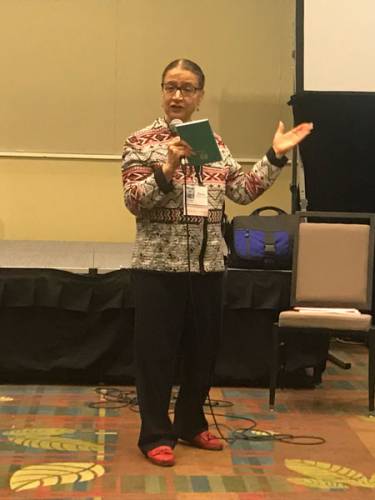 During the White Privilege Conference, Ruling Elder Elona Street-Stewart, synod executive at the Synod of Lakes and Prairies, was one of three women to present during the workshop “The Christian Gaze.” (Photo by Mike Ferguson)

Ruling Elder Elona Street-Stewart, synod executive for Synod of Lakes and Prairies; the Rev. Denise Anderson, coordinator of Racial and Intercultural Justice in the Presbyterian Mission Agency; and the Rev. Molly Casteel, an assistant stated clerk and the manager of Equity and Representation for the Office of the General Assembly, offered the Friday workshop “The Christian Gaze: Disrupting White Supremacy Within Presbyterian Communities of Impact.”

Street-Stewart, the PC(USA)’s first Native American synod executive, began with the papal bull issued by Pope Alexander VI in 1493. That legal pronouncement gave sailors the right to claim territory they “discovered” — so long as the land was inhabited by non-Christians. “You could claim, possess and enslave people there in perpetuity,” she said. “You hear stories of domination during that era — people brutalized and tortured in the process of collecting gold and other resources, and then being wiped off the face of the Earth.”

“All that land was stolen from Native people,” she said. “There’s sin in that. The justification was that we were declared terra nullius. We don’t recognize you; you are empty space.”

She also noted that the Fifth Amendment to the U.S. Constitution replaced the “life, liberty and the pursuit of happiness” asserted 15 years earlier in the Declaration of Independence with requiring due process of any proceeding denying a citizen “life, liberty or property.”

“All of this is Turtle Island,” she said, displaying a time-lapse map of the Lower 48 states over the decades as it changed from Native occupation to colonization. “The process that it became America was determined by Christian monarchs who decided they could enslave people and appropriate their resources.”

It fell to Anderson to briefly outline Presbyterians’ role in the formation of racial identity in the U.S. “It’ll be 250 years of ecclesial history in 20 minutes,” she told workshop attendees.

She traced Scotch-Irish immigration to North America between 1649-1774, immigration fueled in part by the offer of cheap land. “What else are you going to do,” Anderson said, “but pack up and cross the ocean?”

Those Scotch-Irish immigrants were seen as a shield against the Native Americans, according to James Logan, who worked for William Penn in Pennsylvania beginning near the end of the 17th century. Missionaries at the time “sought to Christianize and civilize Native populations,” Anderson said. “They preached grace instead of addressing race. It was a missionary model of brain-washing.”

She called the Presbyterian pastor and writer James Henley Thornwell, who lived from 1812-62, “a real piece of work and a staunch proponent of slavery.”

“He was an incredibly prominent example of being pro-slavery,” she said of the issue that divided the nation and split Presbyterians north and south for more than a century.

But there’s also the Rev. Francis James Grimké, born in 1850, the Presbyterian pastor who in 1909 helped found the National Association for the Advancement of Colored People. Grimké, the longtime pastor of the influential Fifteenth Street Presbyterian Church in Washington, D.C., once said that “race prejudice can’t be talked down — it must be lived down.”

In 1963, the Stated Clerk of the United Presbyterian Church, the Rev. Eugene Carson Blake, joined the Rev. Dr. Martin Luther King Jr. to speak during the March for Jobs and Freedom in the Washington Mall. “I wish I could tell you Presbyterians lived happily ever after,” Anderson said, “but (the northern and southern churches) didn’t reconcile until 1983.”

By 1980, Street-Stewart noted, denominations began reorganizing their structures in order to study race. Native people were beginning to talk about the history of boarding schools. “We’ve had leaders with one foot in the community and the other foot in the church,” she said. “The loss of wealth and assets can never be repaid and our children (who were hauled off to boarding schools where their culture and community were taken from them) and the loss of our language cannot be restored. When you vote,” she advised the  workshop crowd, “remember all this stuff.”

“We are still in the cultural transformation point in our work” to ensure equity and accountability in representation, Casteel said.

“It’s important not to let our people off the hook,” Anderson said. “I’m really proud (that the 2016 General Assembly) passed the Belhar Confession and that we’re living into what Belhar says, that separation and enmity is an affront to God.”