Make A Donation Click Here >
Home › Won’t You Be My Neighbor? 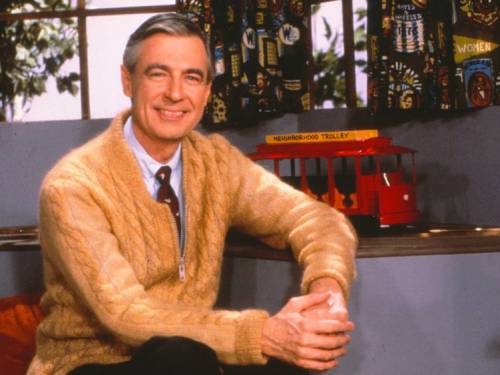 LOUISVILLE — During the heyday of PBS’s Mister Rogers’ Neighborhood even a lot of Presbyterians did not know that the mild-spoken host of the popular PBS children’s program was a clergyman, indeed, no doubt the most famous living Presbyterian in all the world.

As Morgan Neville shows in his new documentary — Won’t You Be My Neighbor — while still in college, Rogers intended to study for the ministry, but put it off when he became fascinated by the new medium of television. He saw it as a great tool for building community but was appalled by its misuse, especially in the terrible, exploitive programs then beamed at children.

Neville engages a room full of fetching personalities to talk about Fred Rogers, while others, including Rogers, speak through well-selected archive footage from the Neighborhood series, interviews, and even a couple of college commencement addresses given by Rogers.

Many of the interviewees were quite close to him, including his concert pianist wife Joanne, sons John and James, and his sister Elaine Crozier. Others worked with him for years including producer Margy Whitmer; Hedda Sharapan, child development advisor; Joe Negri, “Handyman Negri”; David Newell, “Mr. McFeely” and Publicity Director (he is the one I first met when I visited the studio for an interview with Rogers); Francois Clemmons, the black singer cast as “Officer Clemmons”; and several others. Even musician Yo-Yo Ma speaks of his experience as a guest on the show.

Journalist Tom Junold, whose friendship with Fred Rogers during the last five years of the latter’s life will be chronicled in the TriStar movie You Are My Friend, scheduled to begin production this September, appears throughout the film; and minister friend the Rev. George Wirth provides the rare theological comment so important to fully understand Mr. Rogers as more than just a humanitarian concerned for the welfare of children.

As Wirth explains, Rogers managed to preach Christian values without using the doctrinal language of a sermon. Better than most ministers, and undoubtedly than any other children’s program host, he understood and shared Jesus’ concern for children, evident in such passages as Mark 10:33–35.

The film opens with Rogers at the piano explaining his career-long intention through chord modulations — he wants to help children “through some of the difficult modulations in life.” And thus he did, his very first week on the air his program dealing with the Vietnam War; later, on the day following the assassination of Sen. Robert Kennedy, the puppet Daniel Striped Tiger (like all of the puppets, voiced by Rogers) asks Lady Aberlin what is “assassination,” and she, a good stand-in for Rogers in Make Believe Land, explains and reassures the little one.

Concerned that children might harmfully accept fantasy for reality, Rogers separated the Neighborhood of Make Believe with its puppet characters from his house into which he enters at the beginning of each show. He did not enter the realm of King Friday XIII and Lady Aberlin, the famous Trolley providing the connection between himself in his home and the Neighborhood of Make Believe.

Years later, it was such a mix-up — the report of a child injured in a fall when he donned a cape and tried to emulate Superman — that motivated Rogers to resume production of Neighborhood after he had quit for a while.

The film shows that Rogers took on tough topics ignored by most children’s TV, such as violence and anger, war, the environment, death and racism. The one exception is that of homosexuality, as cast member Francois Clemmons, once a closeted gay man, relates, Rogers even threatening to drop him from the show if he should return to the gay bar he had been spotted in. This topic was just too controversial, with the possible loss of vital funding, should it be known that a gay man was being watched by millions of children. However, Francois says that he has been able to forgive Rogers for this, revealing the time when his boss had openly expressed his love for him.

A high point in the film is the inclusion of Rogers’ 1969 six-minute testimony before Congress in response to President Richard Nixon and Sen. John Pastore’s intent to cut the $20 million allotted to PBS in the federal budget. The senator knew little if anything about the witness or his program and had expressed his being tired of the witnesses reading written statements, so Rogers, saying he trusted the senator’s word that he would read his, laid it aside and spoke of his concern for the welfare of the nation’s children, closing by reciting the lyrics of his powerful song about “the mad” inside and the need for the child to be able to stop it. Rogers’ simplicity and sincerity so touches the usually gruff senator that he immediately tells him that PBS will get its $20 million.

We sense the fire of the prophet in his “television has the chance to make a real community out of the entire country,” and then he describes how it is being used — we see clips of people being hit in the face with pies; overuse of violence; advertisers manipulating children. A striking case of the later — two boys are watching soldiers on the screen, when suddenly a toy BAR flies from the TV set into the hands of one delighted boy, followed quickly by a rifle into those of the other boy.

The film also deals with opposition to Rogers, one interviewer haltingly asking him if he is gay because of his mild mannerisms that have often been parodied by comics. Our culture is enamored with the John Wayne image of manhood, so Rogers by his very demeanor is counter-cultural. On Fox News and in the pages of The Wall Street Journal Rogers has been blamed for today’s selfie-taking “Narcissistic Generation” through his constantly telling children that “I like you just the way you are.”

In a commencement speech clip, Rogers effectively counters this when he denies that he is saying that middle-class children should have a selfish sense of entitlement: “What that means ultimately is you don’t ever have to do anything sensational for people to love you.” This for people of faith, of course, is a description of grace.

In the light of developments since his death in 2004, it would be easy to say that Fred Rogers’ campaign to make the world a gentle place in which children are protected failed — judging by the reaction to school massacres, many politicians today seeming to value gun manufacturers over children. And political discourse has sunk to the low level of schoolyard bullies trading insults.

However, after covering his 2004 memorial service, the filmmakers end with some words by Rogers telling his listeners that when the world seems so bad they should “think of someone who has helped you.” We see a series of faces of the people who have spoken previously, each of them thoughtful, each of them touched by the love of this gentle man.

The film deals only with Rogers’ ministry in Pittsburgh, leaving out his work in Canada and then with NBC in New York, but this is not really a criticism.

After seeing this film, you would do well to read Michael G. Long’s fine spiritual biography, PEACEFUL NEIGHBOR: Discovering the Countercultural Mister Rogers. The film takes a secular approach to its subject, whereas the book, published by our own WJK Press, is written by and for believers who are really into social justice, the author pointing out how, though he was not out-front marching with C-R and anti-war protestors, Rogers’ programs and songs subtly dealt with basic issues of justice and love.

You will appreciate Rogers even more after seeing the film — and I suspect will look forward with anticipation to seeing the dramatic film about him scheduled to go into production this fall. I suspect Rogers would blush, but be pleased, with the news that Tom Hanks has been signed to play the best friend that children ever invited into their homes. In the meantime, there is this documentary, scheduled for release on June 8.

Dr. Edward McNulty, long-time movie critic for Presbyterians Today, has written of his personal encounters (including three of his children) with Mr. Rogers at https://www.readthespirit.com/visual-parables/wasnt-it-nice-in-the-neighborhood/.