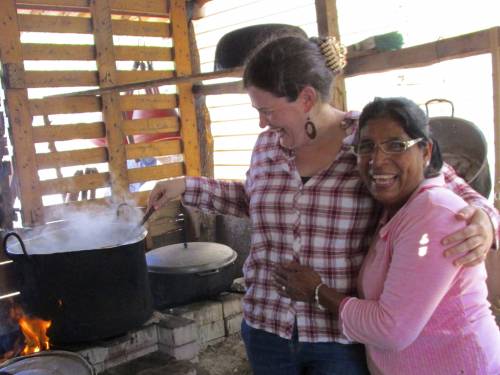 Sarah Henken takes a turn stirring soup with her friend Eunice, one of over 6 million internally displaced persons who are victims of the armed conflict in Colombia. (Photo by Rosaline Maria)

BARRANQUILLA, COLOMBIA – After four years of dialogue and negotiations, President Juan Manuel Santos and the FARC guerrilla group agreed to end hostilities on June 23, 2016. The final peace accord, announced on August 24 and formally signed on September 26, will be placed before the Colombian people for a popular vote on October 2.

Weary from more than half a century of war, virtually all Colombians are eager to start a new chapter in the nation’s history. However, there has been much discussion as to what terms should be included in a peace accord with the guerrillas. The text of the accords allows for “transitional justice” to be applied to all sides of the armed conflict. Penalties will be reduced for those who step forward to confess voluntarily, and more severe for those who are prosecuted and found guilty. Guerrilla ex-combatants will spend six months in designated transitional zones and carry out a three-phased laying down of arms. The United Nations will provide support and oversight, including safeguarding the relinquished weapons until they can be repurposed as sculptures. The U.S. Congress is considering the allocation of new funds to support the peace process, including a contribution to a global fund for landmine removal in Colombia.

Is this a fair and appropriate agreement? The FARC has employed terrible tactics over the years, including kidnappings and bombings. The Colombian army also has been responsible for shocking acts, with a key example being the scandal of several thousand extrajudicial killings known as “false positives.” Civilian non-combatants make up 81 percent of the casualties of the armed conflict in Colombia—far too high a price for the nation to continue paying.

Even so, former president and current senator Alvaro Uribe has voiced heated criticism of the dialogues since they were announced in 2012, and his insistence that guerrilla ex-combatants face harsher penalties and exclusion from politics strikes a chord with a significant number of Colombians. With a plebiscite on the horizon, Uribe’s supporters are actively campaigning for a “no” vote. Meanwhile, a broad spectrum of civil society groups support the government’s invitation to embrace the peace accords. 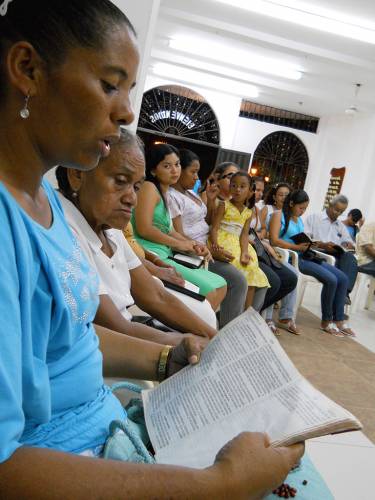 Young and old worship together in the Urabá Presbytery in Colombia. (Photo by Sarah Henken)

At its assembly in March 2016, the Presbyterian Church of Colombia (IPC) issued a new policy for peacemaking that speaks decisively: “the attitude of the church cannot be of spectator, it must be actively committed to peace.” The document denounces fear-mongering and misinformation, stating, “We see with concern the already viral tendency of the media to polarize public opinion with the idea that the country will be handed over to terrorist groups once the peace accord is signed.” The church also draws attention to the ongoing problem of paramilitarism in the form of criminal gangs, called BACRIM, with “actions focused on the selective murder of human rights defenders, unionists and community leaders.”

The IPC’s peace policy identifies patterns that have brought Colombian society to such heights of conflict: “The greatest conflict of our nation is exclusion, the accumulation in the hands of a few of the goods and wealth to which we all have a right. . . . Latin American Theology affirms that we live a spiral of violence, which has its origin in the structural violence and exclusion of the system that gives rise to the subversive violence, which has been answered with the repressive violence of the State and its entire arsenal.” Breaking free of that spiral and building new patterns at all levels of society are challenges facing all Colombians who seek reconciliation.

The IPC understands peacemaking to be its vocation, and has set itself a number of tasks for the hard and hopeful work of reconciliation, including preaching about peace, producing new curricula for different ages and populations, promoting peace-related research and projects at Presbyterian educational institutions, and working with victims of the conflict to promote holistic reparation and reconciliation, as well as with ex-combatants as they integrate into civilian and political life. These efforts will be guided and encouraged by a new synod level peace commission. 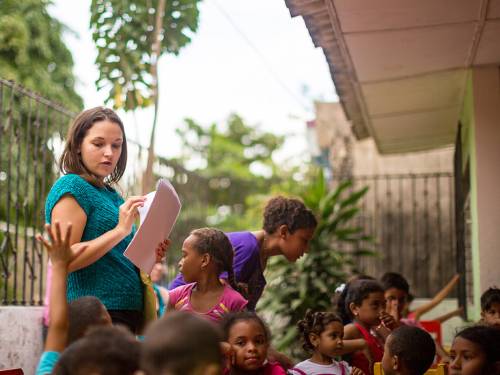 The PC(USA) maintains its historic commitment to partnering with the IPC in this vital ministry. Young Adult Volunteers (YAVs) dedicate themselves to a formative year of service alongside the church. Short term accompaniers provide a pastoral presence and peaceful witness in vulnerable communities. Five U.S. presbyteries with partnerships in Colombia make regular visits and encourage the Colombian church through prayer. Two PC(USA) mission co-workers share their lives in ministry with the IPC, César Carhuachín teaching Bible and theology at the Reformed University, and myself, Sarah Henken, working with YAVs and Colombian young adults as they live into their Christian vocation as peacemakers in various ways. These are exciting times in Colombia, and a time of great promise and possibility for Presbyterian mission and ministry.

I sit with this knowledge and let it sink in: my Colombian peers have known only a homeland at war, where violence has been normalized to an alarming degree. The same could be said for me, really, as the daughter of another country plagued by violence. To dream of peace is a bold and prophetic act, and today we see an entire nation united in that dream. What an incredible thing!

As our sisters and brother in the IPC affirm, “Peace is a human aspiration and a gift of God. . . . To participate in the construction of peace is to become children of God, that is to say, find fullness of life. It is a gift of God because God is the one who puts peace in our hearts, who demolishes the walls that humankind has constructed and the divisions we have created.”

These peace accords and the plans they outline are no magical, complete solution. They are a promise of hard work to come, a detailed albeit partial and imperfect vision of a new future that will, by the grace of God, make space for all Colombians to pursue fullness of life.

Be the church in Colombia
Are you interested in “being church together” with the Presbyterian Church of Colombia for one month? The key requirements for the Colombia Accompaniment Program are listening ears, and open heart and a willingness to share the Colombia story in the U.S. when you return. The next training for potential accompaniers will be held in Stony Point, New York, October 13-17.