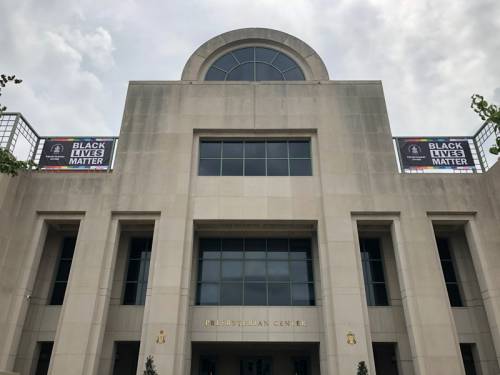 LEXINGTON, Kentucky — Since the uprising against systemic racism and police violence against people who are Black began at the end of May, Presbyterians across the country have joined in solidarity with their siblings of color in sermons and statements, by joining in peaceful protests, engaging in civic dialogue, and other actions.

While there is broad acceptance in the Presbyterian Church (U.S.A.) for most shows of support, one phrase has sparked debate: Black Lives Matter.

The church recently incorporated the assertion into statements of support, including banners hung on the front of the Presbyterian Center in Louisville, Kentucky that say, “Presbyterians Affirm Black Lives Matter,” and in announcements of its upcoming Week of Action in support of racial justice. The same imagery has been used in the church’s website and social media pages, and PC(USA) churches across the country have made similar shows of support.

Not everyone has been on board though.

“Some folks on our social media platforms assert ‘All lives matter’ and question why the PC(USA) is affiliating with the Black Lives Matter organization,” said Dee Decker, Social Media Strategist for the Presbyterian Mission Agency (PMA), who oversees the church’s social media accounts on platforms such as Facebook, Twitter and Instagram. “The assumption is that by saying ‘Black Lives Matter’ the PC(USA) is endorsing the organization rather than the movement.

“Others express that saying ‘Black Lives Matter’ in some way negates or diminishes other races and lifts Black lives above others. Many support this viewpoint by saying ‘Jesus loves all lives’ or ‘God loves all people.’”

“It has been interesting and inspiring to see the PC(USA) social community have vigorous discussion and debate surrounding the Week of Action and what it means to say ‘Black lives matter,’” Decker said.

The debate prompted several church leaders to write a primer on “Why we say, ‘Presbyterians Affirm Black Lives Matter.’” 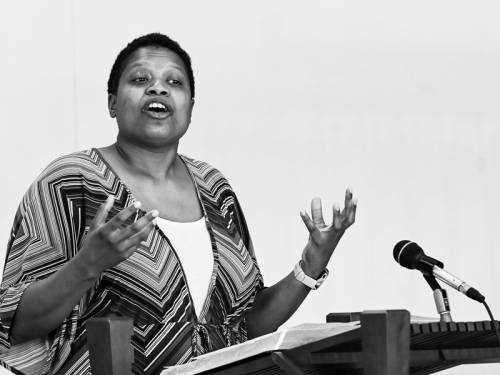 The Rev. Denise Anderson  was Co-Moderator of the 222nd General Assembly (2016) and is now Coordinator of the Presbyterian Mission Agency’s Office of Racial & Intercultural Justice. (Photo by Rich Copley)

“You have people who are earnestly seeking answers about, ‘What does this mean?’” said the Rev. Denise Anderson, Coordinator of the PMA’s Office of Racial and Intercultural Justice and co-moderator of the 222nd General Assembly, who was on the team that wrote the statement. “For those people, we wanted them to understand where this was coming from.

“We also wanted to make it very clear, too, that much of this is coming from Black Presbyterian leadership – we who are here who are leaders in the Presbyterian Church. We know what we’re talking about. We’re the ones who are impacted, and we are also a part of you. So, if you care about us, you’ll care about this.”

The statement is set up in a question/comment and response format and includes several pieces of Presbyterian policy and history showing there is precedent for the church to support the Black Lives Matter movement. It addresses issues such as:

Don’t all lives matter?:  “Saying unequivocally that ‘Black Lives Matter’ in no way means that all lives do not matter. It is rather an acknowledgment that many lives – specifically Black lives – are systemically devalued,” the document says.

I just cannot agree with supporting the Black Lives Matter organization: This section addresses misgivings about Black Lives Matter’s positions and perceived tactics. While acknowledging everyone must use their own discernment, the authors caution against, as a majority-white institution, telling people impacted by oppression how they should go about seeking liberation.

“Black Lives Matter provides a way forward formulated for and by Black people,” the authors write. “And we need not wait for complete agreement with every position before we act in ways that are loving, bold and (again) directed by the communities with whom we want to align.”

The document also addresses perceptions that Black Lives Matter is a “violent Marxist” group saying, “we must name that these labels are not only untrue but rooted in anti-Blackness with intent to frustrate the efforts of Black people seeking justice for themselves. These things must be confronted with truth.” The authors point out that there is a history of labeling movements seeking justice as seditious, anti-Christian, and other characterizations to suppress their message. They encourage readers to see what Black Lives Matter says about itself.

Anderson adds, “the violence that has occurred in demonstrations has been widely condemned by BLM leaders across the country.”

The Presbyterian Church (U.S.A.) is getting too political: The authors note the church’s long history of civic engagement in the United States, for good and bad, and the Bible’s repeated call for liberation and justice.

“We believe that justice for the oppressed is not and should not be a partisan value,” the document says. “Justice is a gospel value, one that all who claim Jesus as Lord should hold.”

“It is important because so much of our history sees us as bearing a responsibility for the racial inequities that persist. When in 2020 I still have people telling me that slavery was the will of God, and that if God hadn’t willed slavery or inequity to happen, then it wouldn’t have happened, and that is literally what you learned in church your whole life, we’ve got some repentance to do on our part. We’ve got some work to do, and not just outside of the church, in the ethos, but within ourselves.”

Anderson said that while making it clear the PC(USA) has no official ties to Black Lives Matter, the authors wanted to make sure they were not distancing the church from the movement.

“That movement has been put on the defensive unnecessarily,” Anderson said. “I really wanted to drive home the fact that majority-white institutions have no standing to determine the path forward for the Black community. Black people can do that, and what we need are allies and co-conspirators.”

Anderson said that while a lot of discussion addresses the Black Lives Matter organization, “the phrase itself elicits some weird and inappropriate responses. So, consider, what is it about the specificity to Black lives that bothers you? Then, we can work from there.”

Learn more about the Presbyterian Week of Action, Aug. 24-30, here.