#GivingTuesday – Join the PC(USA) in responding to a world in need! Give now!
Make A Donation Click Here >
Home › When global response requires global resources 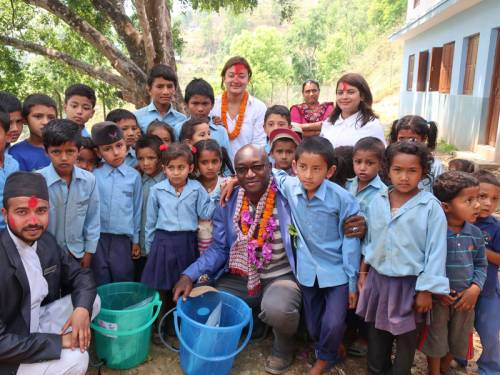 Sheku Sillah, Presbyterian Disaster Assistance’s project manager for Asia and Africa, is shown in the front row near the center distributing water filters to a school in Nepal. (Contributed photo)

LOUISVILLE — The meeting was done, and the Rev. Edwin González-Castillo thought he was leaving with his collaborators from Presbyterian Disaster Assistance (PDA).

This was in the aftermath of Hurricane Maria’s devastating blow to Puerto Rico, and at the time, González-Castillo was the stated clerk for the Presbytery of San Juan, coordinating with PDA to assist in recovery from the storm. The person they were meeting with pulled González-Castillo aside to speak with him in Spanish.

“He started saying things that he didn’t say in the whole meeting that were really important,” González-Castillo said. “When I got to the car, I said, ‘So … this is the backstory that you didn’t hear, because he didn’t want to say it in English.’

“And it was important for us. It was really good information that explained why other things were happening. But he didn’t feel comfortable saying it to people from the mainland, because there’s also a sense of shame that, ‘If we say this, they might think this other thing.’ So, a Latino will understand because he’s from here and he knows what is happening.”

Insight from that moment and similar encounters has informed a restructuring of PDA’s international staffing, in the wake of a key staff member’s departure.

“We had the opportunity to change the model completely,” said the Rev. Dr. Laurie Kraus, director of Presbyterian Disaster Assistance. “Instead of having the work for international be primarily centered in the U.S., we are trying to make sure that wherever possible, we have people whose experience is in the region that they are supervising.”

So, in the new structure, González-Castillo, who joined the PDA staff in early 2018 as a special consultant for Puerto Rico, is now overseeing Latin America and the Caribbean. Sheku Sillah, who has supervised projects for PDA in the Philippines, Nepal and India under contract, is joining the staff as the regional project manager for Asia and Africa. And Kraus will continue to oversee work in Europe and the Middle East.

“It’s an attempt to recognize that global response requires global resources,” Kraus said. “While we’re not looking to broadly expand our staff, we do want to have the areas in which we’re doing response represented by people who understand those areas.

“What we’re trying to do is have colleagues on staff whose location makes them aware and able to be advocates and also to help us to check our privilege and our cultural blind spots so that we can continue to decolonize our work and localize it as much as possible.”

That, to a large extent, has been PDA’s approach, with the restructuring primarily at the top. As it has been doing in the past, PDA’s primary method of international disaster response has been to identify local partners and help them build their capacity to respond to crises and strengthen their communities.

“One approach I like, working with PDA, is we don’t go on the ground, do our things, [impose our beliefs or practices],” said Sillah, who has been involved with humanitarian work since 1999. “Having worked with other organizations … the approach PDA applies is very effective and sustainable. Why effective and sustainable? We don’t just create a culture with our money that, say, we come in to build wells, we come in to give you livelihoods. No.

“No matter how you want to help me, if I’m in need, I think, for sustainability and effectiveness it is better if you consult me, ‘What are your needs?’ If I tell you my needs, if you support me with my preference, I think it will be a very effective and sustainable opportunity. I like that approach very much, and that’s what we emphasize in all our programs that I’ve worked on with PDA.”

He reflects back on his first project for PDA, aiding recovery from Typhoon Haiyan in the Philippines.

Dealing with farmers to get them back to work, the presumption was that they would need farming equipment. But as he worked with the local agriculture community, he found that what they really could use was water buffaloes to help with some of the heavy work. Where they were located, farm machinery would be difficult to maintain, particularly finding spare parts and things of that sort. But a water buffalo could be shared among several families and the community was used to maintaining livestock.

That was also the first place he used Sawyer Water Filters, highly sustainable and effective filters for helping curb waterborne illnesses, which he also addressed in Nepal.

Being involved in international humanitarian work for 20 years has given Sillah plenty of experience with navigating the complexities of issues like getting visas to work in different countries, identifying reliable partners and navigating local politics. 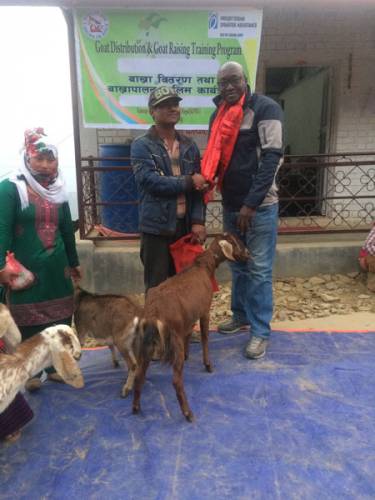 The difficulties and limitations of visas really makes working with reliable local partners imperative, because often Sillah cannot be in a country indefinitely. In Nepal, building the capacity of two local partner organizations enabled a thriving effort including building capacity for agriculture, clothes making, medical facilities and more.

Oliver commented that on a visit to Nepal with Kraus and Compassion, Peace & Justice director Sara Lisherness, the people that Sillah had been mentoring were very proud to show the work they had been doing on the road to recovery from the devastating 2015 earthquake.

Making those contacts and clearing bureaucratic hurdles is something González-Castillo is starting to learn about as he steps into his new role. And he had to learn quickly, because no sooner had he been named to the Latin American post then Hurricane Dorian dealt a devastating blow to the Bahamas.

“It was baptism by fire,” González-Castillo said of the hurricane, which hit a month after he had taken on the new role. “I started receiving a lot of calls about the Bahamas, and before the hurricane hit, I already had contact with some people on the ground.”

Based on his own experience going through Maria, he was aware that it was likely phone lines would be down and other communication would be cut off in the immediate aftermath of the storm. So, he knew he needed to establish contacts to reach out to, once the storm was over. And when he visited the islands after the storm to assess the damage, González-Castillo said that people knowing he had been through Maria changed their body language and moved conversations along quickly.

But it’s not easy.

“Of course, the Bahamas is not Puerto Rico, which is part of the U.S.A., and the Bahamas is governed by Great Britain, which has made some things difficult and complicated,” González-Castillo said. “But at the same time there’s a lot of similarities between what happened to them, and they have a big Haitian community that was affected, and it’s going to take both so many years for this situation to improve.”

A lot of González-Castillo’s early work has been making contacts in Latin American countries, getting a sense of the politics and cultural challenges that will need to be navigated when the time comes to respond to disasters in these countries. 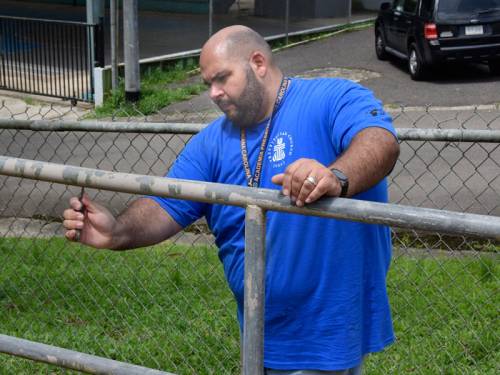 The Rev. Edwin González-Castillo, who oversees Latin America and the Caribbean for Presbyterian Disaster Assistance, scrapes paint from a handrail while on a mission trip to Puerto Rico with Louisville, Kentucky’s Springdale Presbyterian Church, where he’s also the youth coordinator. (Contributed photo)

While he started work as a pastor, his parents gave him roots in humanitarian work by the ways they lived their lives. His mother left the Dominican Republic for Puerto Rico on a late-night boat, and later helped shelter others who made the same move. His father, he remembers, was the type who would literally give the shirt off his back. He remembers people coming to his father’s store with needs, saying they would pay him back, but González-Castillo remembers that his father never actually wrote down what the people owed. He just wanted to help.

“Those are values that you cannot get from a book,” González-Castillo said. “You have to see people act that way. And I love my mother for that. She couldn’t, she didn’t give me money. She didn’t have money. My father didn’t have a lot of money, but whatever the values they had they were more than enough for me.”

Both Sillah and González-Castillo acknowledge that though they are regionally based, they cannot possibly know all about the lives of the people they are walking with. That is why, even though partnerships with people and organizations on the ground are keys to this work, it also involves a lot of travel and weeks, if not months, away from home and family.

But being with people impacted by disaster is vital to getting the long-term help that will have the most impact, that will leave people better prepared for the next time.

González-Castillo recalls meeting a displaced family in a train station, with nowhere, really, to stay, exposed to the cold and the rain and seeing where they tried to make shelter.

“Then you understand why there’s the organization of a church that tried to get clothes for them and tried to get blankets,” González-Castillo said. “It is because they’re sleeping on the streets and they need at least that, for that night. Right? Because the day before, it rained and everything was soaked, and they don’t have anything to wear then the next day.

“So those things you cannot think about it unless you’re there and see it.”

Sillah recalled seeing the results of work in Nepal and said, “I love seeing the lives of people change. So that’s why I have my partners who go to hard-to-reach areas.