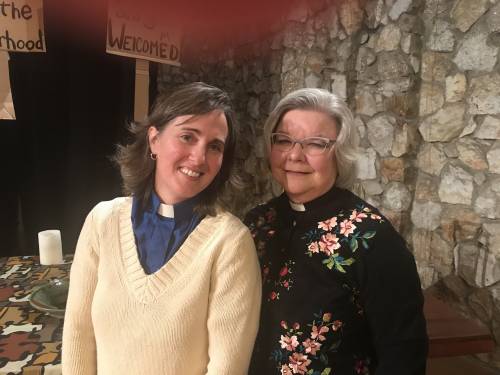 The Revs. Shannon Spencer and Carol Dalton accompanied 13 inmates at the Swannanoa Correctional Center for Women for a Friday presentation at the 2019 College Conference at Montreat. (Photo by Mike Ferguson)

MONTREAT, N.C. — By simply sharing their heartrending personal stories Friday night, two inmates at the nearby Swannanoa Correctional Center for Women hit just the right note near the close of the 2019 College Conference at Montreat.

When they finished their talks, the two women hit many more right notes: one, Taylor, accompanied the other, Travia, on the piano.

“People call it jailhouse religion, but faith is where I draw my strength,” said Travia, who’s serving a life term for murder with the possibility of parole. “’Inmate’ does not define me — I am so much more than that. I am everything God says I am.”

“There is power and potential in this room, so make a difference in someone’s life,” she said moments before receiving a standing ovation from the crowd of nearly 1,000 Presbyterian college students. “If someone would have stopped and said I mattered, my life would have been different.”

“Change the world,” she told students, “because I believe in you.”

A 9th-grade dropout, Travia has earned a bachelor’s degree since being incarcerated. She said she suffered emotional, physical and sexual abuse growing up. “I believed every negative thing that was said about me,” she said. She obtained her first firearm after dropping out of school, “and I remember thinking that no one will put their hands on me again.”

She said she slept in abandoned buildings and under bridges “and did things no girl should have to do to survive.” At one point she returned home, but left as soon as she could. “Nothing had changed but the address,” she said.

“These women are working hard to understand the consequences they incurred,” said the Rev. Dr. Shannon Spencer, founder of the Asheville Poverty Initiative and a prison chaplain. “Bad decisions come from forgetting who we are and whose we are. But no one can strip us away from the identity that God has already given.”

Taylor received a bipolar diagnosis in high school. She’s served four years of a five-year sentence, having killed her friend and her friend’s sister while driving after drinking at a party.

“I came to prison broken and angry, and I was a Christian,” she said. “I found women who said I need you and you need me, and we will survive. I found chaplains who listened to me ramble forever about crazy stuff.”

Taylor has earned an associate’s degree in prison and plans to become a clinical psychologist following her release. “I’m going to study all things brainy,” she said.

She urged students not just to vote, but to “go be your vote.”

“If you want policy reform, reform your community,” she said. “Thank you for holding my burden and for being community members who are engaged — who look around and who care.”

“I didn’t wake up one morning thinking, man, I’m going to be a chaplain in a prison,” said the Rev. Carol Dalton, a chaplain at Swannanoa for nearly 12 years. “I didn’t know what I was getting into, but it didn’t take me long to fall in love.”

It’s the women inside “who have taught us how to be a chaplain,” she said. “People ask me, ‘What’s the hardest thing you do?’ It’s when they won’t listen. I know that’s the person she wants to be, but I’ll be dadgum if she doesn’t mess up again. We just keep loving them.”

She urged those in attendance considering church work to consider applying what works for groups like Alcoholics Anonymous.

“I have learned the 12 steps is for all of us, and the church could use some recovery,” she said. “We all have stuff. If you’re walking on planet Earth, you have something to recover from.”

Other inmates offered up another gift to the conference: an 11-member choir, dressed in green robes, delivered a brief a cappella concert, complete with dance moves.

“We weren’t arrested,” one inmate said. “We were rescued.”