Body urges US to fulfill commitments to Paris Agreement 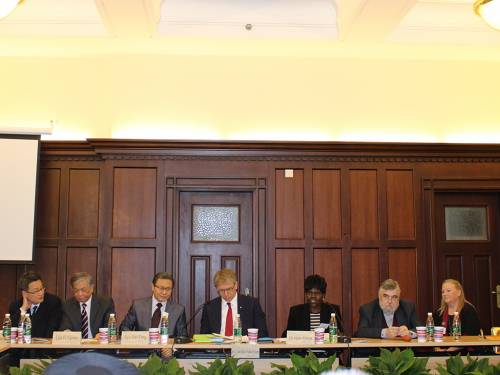 GENEVA – While meeting in Nanjing and Shanghai, China November 17-23, the World Council of Churches (WCC) executive committee issued a Statement on Climate Justice reiterating the urgent concerns of churches in relation to climate change, and calls on all states to fulfill the commitments of the Paris Agreement.

The Paris Agreement, adopted at the UN Climate Change Conference in Paris in December 2015, has come into legal effect after a rapid ratification process in which both China and the United States of America joined. The Paris Agreement commits countries to keeping the global temperature rise to below 2 degrees Celsius, making every effort to limit the rise to the lower threshold of 1.5 degrees Celsius.

The WCC executive committee statement acknowledges and welcomes the example offered by the government of China in its ratification of the Paris Agreement, and “in leading the world in investing in development of renewable energy.” The statement encourages the government of China to “show further global leadership by reducing greenhouse gas emissions in line with the Paris Agreement commitments.”

The statement also reaffirms the importance of continuing ecumenical advocacy and action for climate justice in the framework of a pilgrimage of justice and peace, and intensified interfaith cooperation for the implementation of the Paris Agreement.

The WCC executive committee “calls especially on rich industrialized countries to scale up support (including through technology transfer) and to fulfill the commitment to mobilize $100 billion per year for climate change mitigation and adaptation from 2020.”

The statement also expresses concern at the pledge by U.S. President-elect Donald Trump to withdraw from the Paris Agreement, and calls on the U.S. government to maintain and fulfill the commitments entailed in its ratification of the Paris Agreement.

Noting that climate change is already having adverse consequences on the very foundations of peoples’ sustenance, water and food, the executive committee statement also welcomes and encourages the work of the WCC’s Ecumenical Water Network and of the WCC-Ecumenical Advocacy Alliance Food for Life campaign.

The WCC Executive Committee meets twice a year, monitors ongoing work, approves plans and supervises the budget approved by the Central Committee. This is the first time a WCC governing body has met in the People’s Republic of China .The meeting took place in Shanghai and Nanjing November 17-23 hosted by the China Christian Council and the Three Self Patriotic Movement Committee. The WCC Leadership of the World Council of Churches met November 24 with Minister Wang Zuoan, Director of State Administration for Religious Affairs, in Beijing.