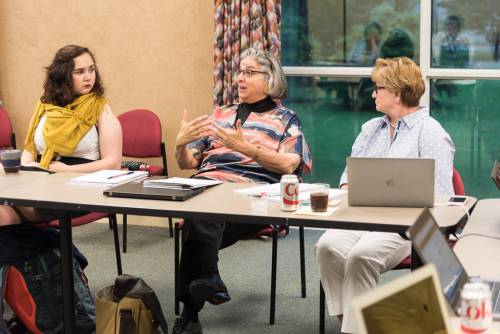 LOUISVILLE – The Way Forward Commission of the Presbyterian Church (U.S.A) concluded its meeting at Laws Lodge on the campus of Louisville Presbyterian Theological Seminary today. The leading item up for discussion was the role of the Stated Clerk and if, or how, that elected official can speak on behalf of the denomination.

Following opening worship, commission moderator Mark Hostetter began by telling other commission members he had sent the recommendations approved at yesterday’s meeting to agency heads and board chairs, saying he’d received positive feedback from those contacted.

Turning its attention to General Assembly 223 (2018) in St. Louis next summer, the group received an update on when their presentation is scheduled (Sunday, June 17) and when they will meet with commissioners appointed to the Way Forward Committee (Monday, June 18.) Though a detailed schedule is not available at this time, commission members were urged be present for discussions in which they played a leadership role. 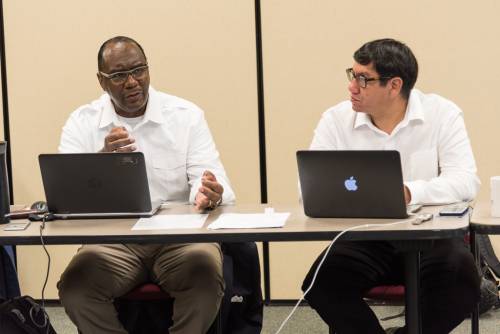 Commission member Sam Bonner gave an update on the Way Forward Commission’s discussion with agencies other than the Presbyterian Mission Agency (PMA) and Office of the General Assembly (OGA), saying two items will be addressed soon.

The first is a discussion and a possible vote on a proposal to the PMA Board this Friday, Sept. 22, on the consolidation of publishing operations within the Presbyterian Publishing Corporation (PPC), the umbrella agency for Westminster John Knox and other imprints. Though final details of the consolidation have not been released, an early working draft of the proposal suggested curriculum and church resource publishing activities currently housed in the Congregational Ministries Publishing group of the PMA will be integrated into PPC.

The second discussion underway is how administration of the Church Loan Program, currently housed in PMA, can be better served by the staff of the Presbyterian Investment and Loan Program (PILP), which currently engages in such activities.

The closing topic of the day for the commission focused on the role, responsibilities and potential reach of the Stated Clerk as the head of the PC(USA).

Staff liaison Tom Hay reminded commissioners, “The Book of Order is very terse about the role of the stated clerk.” Noting changes to the Book of Order derived from the 2010 All Agency Review, Hay showed the wording specifying the Stated Clerk “serves as primary spokesperson for GA actions, unless the GA has directed otherwise” and the Executive Director of PMA “serves as primary spokesperson for GAMC [now the PMA Board] policies and programs.”

Bonner pointed out, as he has in past discussions on the topic, the ambiguity of PC(USA) polity in naming a singular, accountable leader who can speak to and for the denomination on any number of topics, not only those derived from General Assembly pronouncements or directives.

“When Presbyterians speak we typically have the power, but it’s quiet,” he said of the influence of the PC(USA) in media and culture. “Maybe we used to have the power, but I don’t think it does any more. In the past, the GAMC spoke on behalf of the GA, now the PMA doesn’t have that same role.”

A working group of the commission is expected to revise its recommendations on the role of the Stated Clerk in its report to the General Assembly.

Hostetter will provide updates on the commission’s progress to the Committee on the General Assembly (COGA) and the Presbyterian Mission Agency Board (PMAB), both meeting in Louisville later this week. The commission will meet via conference call Oct. 24 and Nov. 29, and have its final face-to-face meeting Jan. 17–19 in Seattle.