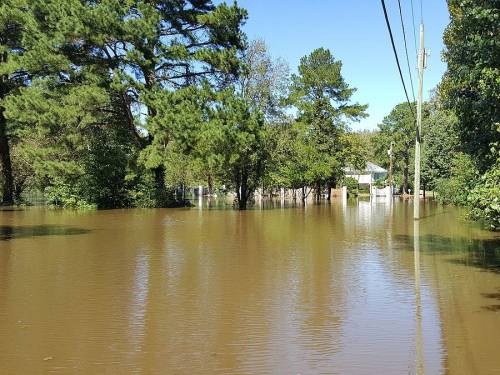 Flooding on the southern bank of the Tar River near Greenville, North Carolina on October 10 when the river cresting around 20 feet (6.1 m). (Photo by Ed Erhart via WikiMedia)

LOUISVILLE – It’s been several days since Hurricane Matthew made its way up the eastern U.S. coastline and people are still being evacuated. Power outages and high water have made it difficult for authorities to determine the extent of Matthew’s wrath.

“It’s not just coastal areas that have been impacted,” said Jim Kirk, associate for U.S. disaster response with Presbyterian Disaster Assistance. “Because of the heavy rains in North and South Carolina as well as Virginia, there is a concern about flooding in the central parts of the states.”

Kirk and other PDA staff have been in constant contact with church leaders in the affected areas.

“I’ve been in touch with presbytery and synod execs,” said Kirk. “We’ve let them know that we care and are willing to help. We will have boots on the ground this week.”

Because of the rising water, Kirk says it’s difficult to determine the extent of damage, but expects the long-term recovery to take three to five years.

“This is an event that has significantly impacted nine presbyteries and that’s unusual. We’re talking something on the level of a Hurricane Sandy. It has covered a lot of territory,” said Kirk. “If there is a blessing out of this, it didn’t make landfall as a Category 4 hurricane, but it hugged the coast from Florida to Virginia.”

The Rev. Bill Neely is a member of the PDA National Response Team as well as pastor of the First Presbyterian Church of Greenville, North Carolina. He says it is still a case of wait and see as rivers and streams crest in the next few days.

“Most of the Greene County roads have been cut off except for one that heads south into Kinston,” said Neely. “We’ve become an island because of the rising water.”

Neely says he and other members of his response team have reached out to a majority of churches in the eastern part of the state but have yet to reach out to coastal Carolina.

“Right now we are waiting for the water to quit rising. It’s almost impossible to make any assessment until the water comes down,” said Neely. “There are people still being evacuated and airlifted out of houses all across the east.”

Neely says the youth in his church have put together more than 160 health kits to send to shelters in Bethel, North Carolina and he expects to ask for volunteer teams to assist with clean up and long-term recovery.

“We expect to find some damage in our churches and members’ homes, but we can handle that,” said Neely. “For poor people, it’s a devastation because they had very little to start with, and now they’ve lost that. They don’t have insurance and fall below the poverty line already. They’re going to need help.”

“Some areas have totally opened up and residents are returning from upstate and other places,” said Woods. “Some areas on the outer islands have so much debris from trees and such but they are slowly letting people back on the islands and will continue to do so for the rest of the week.”

Woods has reached out to all 48 churches that are part of the 12 counties of lower South Carolina. He’s heard reports of damaged roofs, downed trees and loss of power. Flooding continues in many areas, but he says people are managing.

“We are working with all of the available resources in Charleston to clean up debris and get the power back on as soon as possible,” he said. “I’ve already asked PDA to dispatch NRT members to the area to assess what has happened and the extent of damage. As soon as the way is clear in the coming weeks, we will have teams on the ground to work with us.”

Woods says the mass evacuation of people up and down the coastline was the right thing to do and likely saved numerous lives.

Florida’s emergency response teams are thankful the damage wasn’t as severe as projected. People are still trying to get back into their homes as crews work to restore power and muck out the water and sand.

“There are a lot of people who lost everything. The storm surge made a total mess of neighborhoods,” said Kathy Broyard, executive director of Florida Presbyterian Disaster Assistance Network (FLAPDAN.) “Long-term recovery work will take months, if not years, to complete.”

Broyard says they’ve partnered with Florida VOAD, Salvation Army, Baptist Kitchen, the Red Cross and others to provide meals as well as muck out as many homes as possible.

“I received an email from a pastor in St. Augustine who said people are in shock following the storm,” she said. “The pastor said he had to support one lady as she packed her clothes because she was barely able to stand after seeing the damage.”

As she continues to reach out to churches and communities along the border, Broyard says she’s found some communities where there was little damage and others that dealt with tremendous storm surge.

“We will work to form long-term recovery groups in the areas of need,” she said. “We will also support the efforts of volunteers, specifically PDA, for volunteer housing and working with churches that might be able to consider hosting volunteers for clean up and long-term repairs.”

Kirk says financial support will be critical in helping the communities restore homes and roads damaged by the storm and high water.

“We need to lift presbytery leadership and faith leaders in prayer. There are communities in South Carolina alone that have been working non-stop to repair storm damaged homes for the last 18 months,” said Kirk. “That’s grueling. We hope churches will consider mission trips and financial support through the One Great Hour of Sharing.”

Those interested in supporting relief efforts should designate gifts to “Hurricane Matthew” through https://pma.pcusa.org/donate/make-a-gift/gift-info/DR000193/.