Make A Donation Click Here >
Home › Vandals tore down their flags, so this church made them bigger 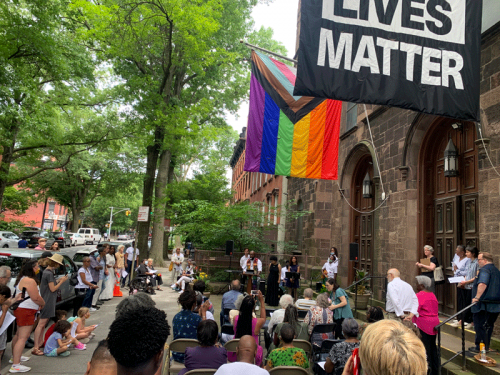 The newest additions to the exterior of the historic Brooklyn church building declare that 164 years later, it is still on the path of justice.

“Every time people walk by this church, they will be reminded that we took the time, you all took your resources, we continued to pour our labor into declaring these truths,” the Rev. David F. Nunn-Telfort said during the June 26 ceremony to dedicate two 12.5-by-9.5 foot flags that declare “Black Lives Matter” and Pride in the LGBTQIA+ community, with Scriptures to reinforce those messages. 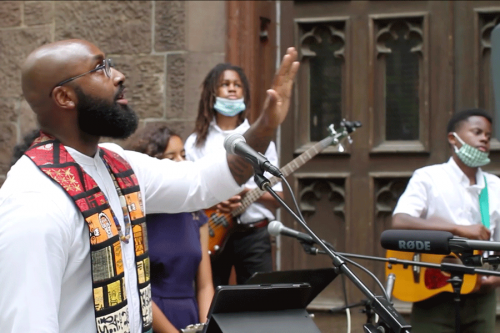 It is a big statement, driven in part by destructive responses to more modest statements the church made in the past few years, and inspired by a famous Brooklyn resident.

Like the sign says, the quest for justice is in Lafayette Avenue Presbyterian Church’s roots, and what it has become known for through the years.

“Lafayette Avenue Presbyterian is an example of where the presbytery wants to go in justice ministry,” said Edgardo Acevedo, Advocate for Justice Ministries in the Presbytery of New York City. The church’s outward statements are backed up by deep involvement in the Fort Greene section of Brooklyn in advocacy and outreach work, Acevedo added.

Janise Mitchell, who co-chairs the church’s Social Justice Committee with Jerome Sauvage, said the idea of flags first started several years ago with some members saying the church needed to make a visible statement in support of Black Lives Matter.

A flag made perfect sense in the context of the church, Mitchell said, as Psalm 20:5 is painted on a wall in the church narthex: “We will rejoice in thy salvation, and in the name of our God we will set up our banners: the Lord fulfil all thy petitions.”

The church initially displayed a Black Lives Matter flag outside, which was met with a positive response and encouragement to display a Pride flag as well.

Then George Floyd was murdered by a Minneapolis Police officer in May 2020, sparking an uprising for racial justice as well as opposition to that movement. Like many churches across the country, LAPC saw vandalism and destruction of its symbolic statements, which included a memorial of gold ribbons made by the church’s youth and hung on the fence outside the church in memory of victims of police violence. One night in August, the ribbons and the Pride flag were torn down and thrown on the ground.

Undeterred, church youth had a chalkboard placed on the fence where people could write reflections about what they would change in the world, if they could, and adorned the exterior with signs and chalk art. Members say the youth were adamant about urging the church to speak out against people trying to silence its message.

“We can be lulled into believing we are an oasis of inclusivity,” Nunn-Telfort told the crowd at the flag dedication ceremony, reflecting on the broad perception of New York City and Brooklyn as progressive havens. “We can believe the systemic racism and heinous heteronormativity that harms people is somewhere out there or in other states. But the truth is the brokenness of the world shows up everywhere.” 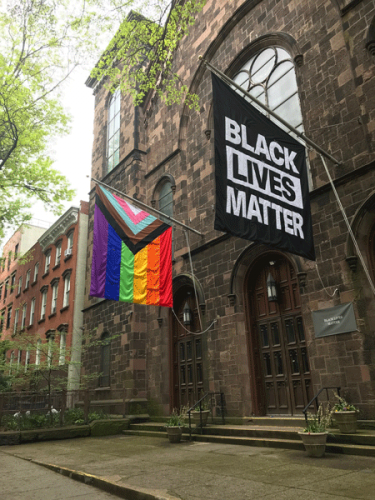 Faced with destructive opposition to their statements, LAPC members decided it was time to make a bigger statement. That brought up an old idea.

Just a couple blocks away from the church is the headquarters of 40 Acres and a Mule Filmworks, director Spike Lee’s production company. Church member Alison Cornyn was always impressed by the banners that hung in front of the office identifying it and its projects as well as commemorating occasions, such as the deaths of musician Prince and basketball great Kobe Bryant.

When talk began a few years back about flags on the church, Cornyn went to work finding out who Lee’s flag maker was, with the idea of making flags for the church’s existing but unused 16-foot flagpoles. Eventually she found Gravesend Flag Company of Brooklyn and started talking about what would be needed for the proper display at the church. The cost, at the time, turned out to be prohibitively expensive — more than $7,000. The project seemed like a no go, until the need to make a big statement emerged.

“I was like, this is the time we do our flags, if we can raise the money,” Cornyn said. “When somebody does something like this, then what better way to respond than to make it bigger, stronger and more powerful than it was before.”

The Social Justice Committee, with support from the Marketing and Communications Committee, worked to raise more than $5,000 to make and place the flags in the front of the church, “well out of hate’s reach,” as a description of the project says. Cornyn said they were also able to work the price down from the original quote.

Designing the flags, the church decided to have the familiar Black Lives Matter image and the Progress Pride flag on one side and scriptures against a purple background on the other: 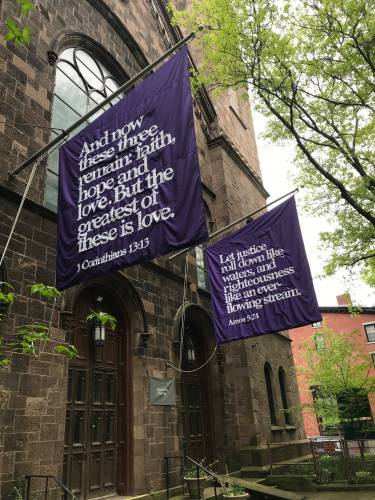 Pride flag: “And now these three remain: faith, hope, and love. But the greatest of these is love.” 1 Corinthians 13:13

Because a rigging truck is required to raise the flags, they were put up early on a May morning. Cornyn said the flags took her by surprise when she went by that morning and filled her with pride for the church.

“Because our little flags had been torn down, we were able to put up these huge flags and they speak so loudly to the values of our church,” Cornyn said. “They also bring such life to the facade, because the church is old, and it’s got kind of this dark facade. And I think somebody walked by once and they said, ‘Is that even a functional church?’ There’s no question now. It’s very much alive, and you see people all the time walking by and stopping and taking pictures.

“That’s really gratifying too because it means it doesn’t just mean something to us. It means something to people that walk by.”

Mitchell said, “Flags are not meant to be neutral. Right? They are a sign that, ‘We’re not just saying what we are, we mean what we say.’ It has to be known this is a welcoming community, this is a safe place for you to find fellowship.” 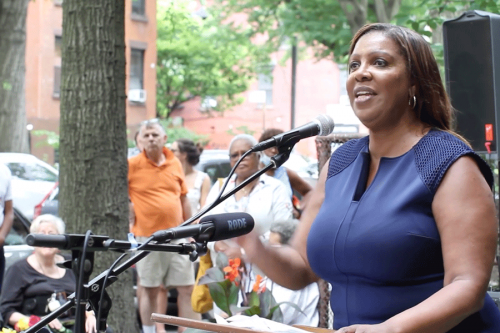 At the celebration of the new flags, organized by the Social Justice Committee as well as the church’s Circle of More Light and Opening Doors Campaign, the youth sang an original song, members read a history of the project, and another famous Brooklyn native, New York Attorney General Letitia James, came to testify for the church.

“This church has been at the forefront of so many movements and so many struggles,” James said in a speech that sounded a lot like a sermon. “This church has borne this great responsibility with unshakable morals, unshakeable empathy, wisdom, and faith. This is why whenever our spirits are low, we walk into this church … to be uplifted and to remember that all of us should walk in the light, all of us should remember there is a higher spirit.”

She called the flags “symbols of love and acceptance and respect and inclusion that have exhibited in this neighborhood and this church for over a century.”