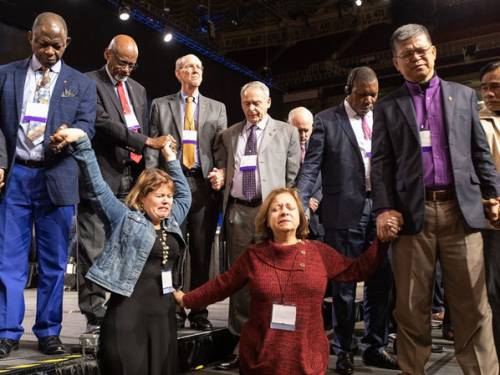 Delegates join in prayer with bishops at the front of the stage before a key vote on church policies about homosexuality during the 2019 United Methodist General Conference in St. Louis. (Photo by Mike DuBose, United Methodist News Service)

St. LOUIS (RNS) — Delegates to a special session of the United Methodist Church decided Tuesday to strengthen the denomination’s ban on the ordination and marriage of LGBTQ people.

Delegates to the General Conference, the global denomination’s decision-making body, passed the Traditional Plan by a vote of 438 to 384.

The Traditional Plan was one of three proposals for the church to move forward together despite deep divides over the inclusion of LGBTQ members that was presented to the conference by a specially-appointed Commission on A Way Forward.

Earlier in the day, a last-ditch effort to pass an alternate proposal, known as the One Church Plan, failed. That plan, recommended by the denomination’s Council of Bishops, would have allowed individual churches and regional annual conferences to decide whether to ordain and marry LGBTQ members.

The denomination’s Legislative Committee, made up of all 864 General Conference delegates, rejected the One Church Plan on Monday. Delegates then rejected a minority plan that would have substituted it as a replacement for the Traditional Plan on Tuesday.

Earlier in the day, a United Methodist judicial committee ruled parts of the Traditional Plan were unconstitutional. That required delegates to debate a series of amendments to the plan. Some of the constitutional issues remained, even after the plan passed.

The vote on the traditional plan followed hours of passionate and sometimes rancorous debate
Some opponents of the plan attempted to delay the vote with a series of amendments.

“We’re going to amend until the Monster trucks roll in!” said the Rev. Mark Holland, a delegate from the Great Plains Conference.

Holland, whose Mainstream UMC group had advocated for the One Church Plan, was referring to the next event scheduled at the conference center: Monster Jam. The General Conference general session had a hard deadline of 6:30 p.m. local time, due to that event.

Delegates debated how to deal with churches that want to leave the denomination as observers in the stands shouted, “Stop the harm!” A motion to appeal the vote on the Traditional Plan to the denomination’s judicial council also passed.

The United Methodist Church has more than 12.5 million members worldwide.

About 58 percent of the delegates to the General Conference are from the United States, where the United Methodist Church is the second-largest Protestant denomination, claiming nearly 7 million members. Nearly 41 percent are from central conferences outside the U.S., including growing churches in African countries and in the Philippines.