SOUTH KOREA—I need you to work late translating again tonight, Kurt,” Rev. Seung Min Shin told me at the end of the day. He handed me a statement written in Korean by Christians from North and South Korea in consultation. “We need the English version to send to the World Council of Churches tomorrow, and then we can use it for our peace treaty campaign,” he explained. 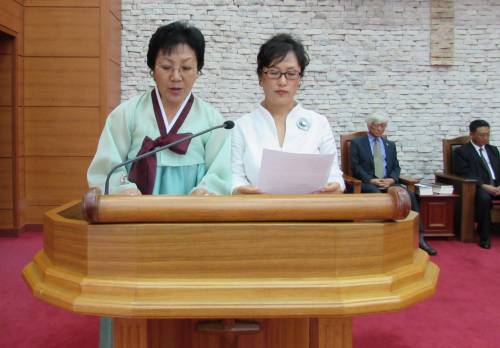 Rev. Shin is director of the Reconciliation and Unification Department of the National Council of Churches in Korea (NCCK). Since the summer of 2014, I have been working for NCCK, translating and sharing statements, letters of advocacy for peace, and joint prayers written in cooperation between the NCCK in South Korea and the official church of North Korea, the Korean Christian Federation (KCF).

At first, the stories of all the NCCK consultations and joint activities with the KCF surprised me. Up to that point, I’d been led me to believe reunification was impossible. Slowly, as I have become familiar with the history of the NCCK, I have begun to learn that I had fallen into the “Danger of a Single Story,” just as in the famous TED Talk given by novelist Chimamanda Ngozi Adichie (2009).1

Hearing their story, I realized how little our history books and the news tell us about the creation of Korean division and the actions that led to war in 1950. With renewed interest, I read alternate histories of Korea under Japanese occupation up to 1945 and then under competing U.S. and Soviet occupations. 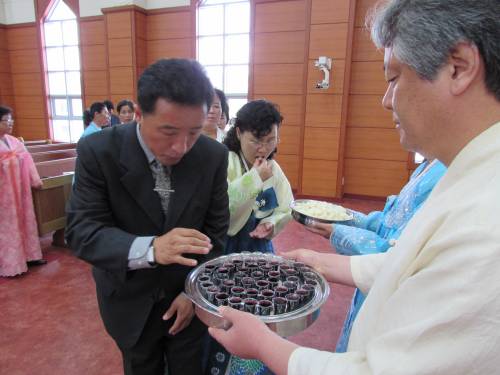 For example, I learned that when occupying the southern zone of Korea, the U.S. Military Government stipulated in 1946 that all Koreans who had been imprisoned by Japanese colonial police would be banned from service in the southern constabulary, which became the South Korean military.2 When Koreans rose up in protest of policies such as these, the U.S. and the southern leadership cracked down with devastating force, such as in Jeju Island where the South Korean military, under command of U.S. military, killed or caused 15,000 people to disappear from 1948-1949, with an estimated 15,000 more added before it finally came to an end in 1954.3 These and other stories did not fit with the single story I had been told.

As I read these histories I also saw Ferguson, Missouri, rise up and ask whether our U.S. institutions believe Black Lives Matter. When riots broke out, I saw friends and leaders say our society’s only problems are the violent and angry responses of the black community. They suggested we cannot speak of justice when protestors are so violent. On March 14, 1968, Martin Luther King Jr. addressed the attempt to ignore transforming a system of oppression by focusing on the violent riots of others in the Civil Rights movement: “It would be morally irresponsible for me to [condemn riots] without, at the same time, condemning the contingent, intolerable conditions that exist in our society. These conditions are the things that cause individuals to feel that they have no other alternative than to engage in violent rebellions to get attention. And I must say tonight that a riot is the language of the unheard.”

I wonder now if our U.S. foreign policy continues to perpetuate hostility for over 60 years because there is something we in the U.S. have not heard. I believe there is more for me and for us as U.S. citizens to learn about our role in Korean division. 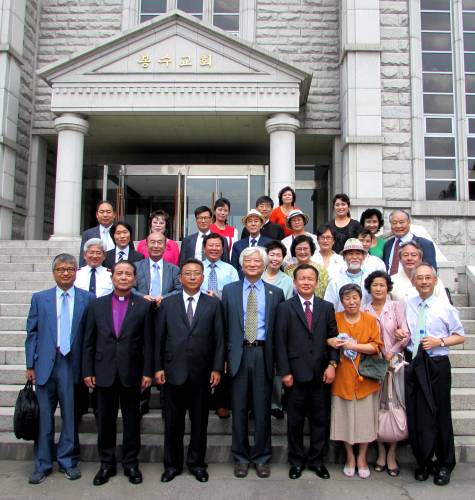 Delegates of the NCCK (South Korea) and the KCF (North Korea) in front of Bongsu Church for the Joint South-North Worship for Reconciliation on the Korean Peninsula. Photo by Rev. Hye Min Roh.

My NCCK partners want the U.S. to hear of the very legitimate fear of annihilation in the hearts of North Koreans. In the North they remember the utter devastation of the Korean War. Will the next president of the U.S. be willing to draw on the Bush doctrine of preemptive strike as in the 2003 invasion of Iraq? Mutually assured destruction appears to be the preferred deterrent to war for the U.S. Because North Korea currently cannot match the warfare capability of the U.S., it has no leverage to threaten mutual destruction. That leaves North Korea with two options: try to deter a preemptive invasion from a position of vulnerability or develop its own nuclear weapons capability.

Learning this context led me to join the NCCK’s attempt to transform U.S. policy, so that a peace treaty may pave the way for talks of demilitarization of the peninsula. The NCCK is bringing me with its Unification Committee to the U.S. in July for its campaign to turn the Korean Armistice Agreement into a peace treaty. I hope that you might join me in learning these histories and bringing hidden truths to the light of God.

WORK FOR RECONCILIATION
Support the work of Kurt and his wife, Hyeyoung, in South Korea.
pcusa.org/donate/E200496

—–
This article is from the Summer 2016 issue of Mission Crossroads magazine, which is available online and also printed and mailed to subscribers’ homes free three times a year by Presbyterian World Mission.