Leading Theologically guest explains how to authentically lead worship and other gatherings, even when you don’t feel like it 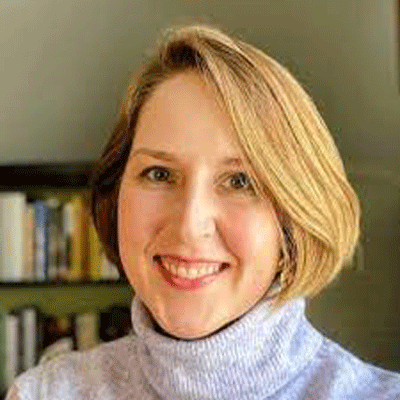 Bereza’s book is “Professional Christian: Being Fully Yourself in the Spotlight of Public Ministry.” Read the introduction here.

Bereza, who’s been a professional church musician since the age of 11, said the book is based on interviews with about 50 people involved in ministry, education and other professional endeavors. It’s based in part on her experience as a professional church musician, “where I had to show up no matter how I felt and lead worship and be ‘on.’ I am an energetic person when I’m leading my choir. I’ve never felt like that was fake,” but she has felt sick and “still had to show up and lead worship when I just want to stay home and go to sleep.”

“What does it mean to have integrity,” she wondered out loud, “when you’re showing up to minister and worship God but you don’t want to?”

While pursuing her doctorate, she interviewed musicians serving mostly fundamental churches, “where the vocalist not only wants to communicate the true words [of a song or hymn], but they want to communicate with their body and posture, what musicologists call ‘performance practice,’” Bereza told Hinson-Hasty. “They want to communicate that they themselves believe those words are true … You’re not supposed to have a monotone face on. You’re supposed to be emoting, but what if you don’t feel like it?”

“How do you do all that with integrity?” she asked. “This book comes out of that question and ends up exploring a lot more questions,” including “How can you be truly yourself in ministry, given that people want you to be a role model? Depending on your denominational setting, they think you’re extra special close to God, or whatever it is in their understanding of what it means to be in ministry.”

“Or maybe you’re a schoolteacher and you’re supposed to follow all the rules of the school. Maybe you signed up for that and maybe you didn’t. How do you do that with integrity?”

Especially vulnerable, she said, are those “who can be hired and fired on religious grounds,” a group that ranges from pastors to the French teacher at the local sectarian school.

People involved in professional ministry are of course helping others during “the important moments in people’s lives,” including weddings, funerals, baptism and death beds. Bereza interviewed chaplains in military and hospital settings who told her that their chief goal ministering to dying people and their friends and family is “no matter what I think about things, I am there for that person, and so I have to put the focus on that person.”

“Sometimes the spotlight of public ministry,” she said, “is the wholehearted focus on someone else no matter what you think.”

When he was in parish ministry, Hinson-Hasty would hear from members and friends who wondered why he wasn’t smiling more often during worship. But sometimes during worship, a smile on the pastor’s face is inauthentic. Pastoral search committees are among those saying they are looking for authenticity in their new called pastor, he said.

“I just think that’s not a very useful value for us to aspire to,” Bereza replied. “The issue with authenticity is there are so many things that authenticity means that sometimes it doesn’t mean much at all.”

For many worship leaders, “our most common way to use authenticity is to be spontaneous and natural, like the first thing that comes to our heart is the truest of things,” she said. “But guess what: In ministry we aren’t able to do that a lot of times. As Christians we are supposed to deny our first impulses because our first impulses are often contrary to the love of God and to the love of our neighbor … If you are authentic to your spontaneous feelings, you can end up in trouble.”

Sincerity, she said, “can be a helpful way to think about what is true, or a way to have integrity in a real-time situation — like in this conversation, which is live. If we were recording a podcast with an opportunity to edit, that’d be different than right now talking to y’all on Facebook.”

“People say that’s why they love the show,” Hinson-Hasty said. “They love it live.”

“In this kind of setting where we are in a real-time ministry moment, I think sincerity is really important, because sincerity gives us the opportunity to really think about being ourselves while also being a professional. It’s about being in line with your values and it’s about being appropriate to the specific moment we’re in,” she said. “To me that’s a much more helpful value than spontaneous authenticity.”

“Thanks for who you are,” Hinson-Hasty told Bereza before asking her to pray to conclude their time together. “The bright light, the glow — it is real,” he told the audience.

“God, you have made us all to glow so brightly and to be so full of your Holy Spirit,” Bereza told the Almighty. “We pray you would lead us to that fullness of self, so that we can better love you and our neighbors.”