Make A Donation Click Here >
Home › To market, to market!

APCE leadership transforms Marketplace into a house of blessing 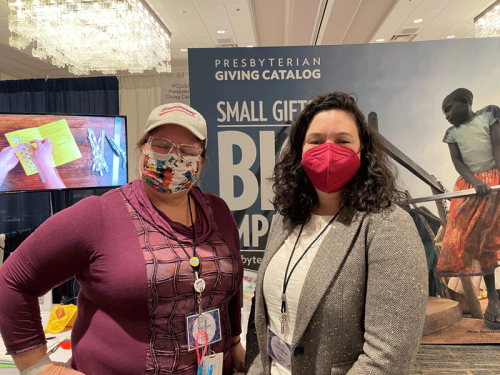 Kat Green-Ross and Christina Cosby served as co-chairs of the APCE Marketplace. (Photo by Bette Case)

CHICAGO — Although God’s house may be no place for vendors, that’s not to say that there’s no room for God in the marketplace.

At least that’s the approach that Christina Cosby and Kathryn “Kat” Green-Ross took when planning and designing the Marketplace and Bookstore for the 2022 annual event of the Association of Partners in Christian Education (APCE), the new name adopted by the organization at its corporation meeting here on Feb. 10.

Cosby, mission specialist for the Middle East and Europe with Presbyterian World Mission, and Green-Ross, coordinator of Children’s Ministries at Second Presbyterian Church, Indianapolis, brought their educators’ and pastoral sensibilities to their roles on APCE’s Annual Event Ministry Team.

“One of the things we really wanted to do was to see our in-person vendors as a group exercising their faithful ministry by resourcing the educators in local churches,” said Green-Ross. “We wanted to be sure they felt seen. Because these are people whom our educators have a relationship with, this gives them an opportunity to get face to face with the people they work with all the time. Instead of seeing the Marketplace as functional, we chose to see it as relational.”

Following a year in which everything about APCE’s annual event — including the Marketplace and Bookstore — was necessarily virtual due to the pandemic, 25 eager exhibitors registered to staff their booths in person, alongside some seven “virtual vendors,” who weren’t able to travel for various reasons.

Those exhibitors who did make the trip were met with unparalleled hospitality, one of APCE’s core values.

“Since the vendors and the folks from our denominational offices and partner denominations spend so much time and resources in educating and sustaining our educators and clergy, this is one way to give back to them,” said Cosby. “Because they are such an essential part of our circle of faith, we were hoping to more intentionally include them this year.”

When exhibitors arrived on Feb. 9 to check in and set up, many were surprised — and delighted — to be told to arrive 15 minutes before the doors to the Marketplace opened the next day to receive a blessing. 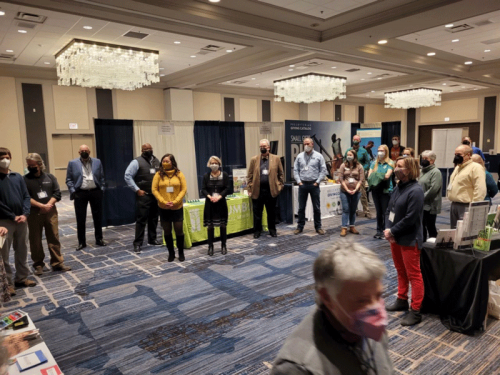 Vendors at the APCE Marketplace are welcomed and blessed. (Photo by Bette Case)

It was the first time in APCE’s history that there was an official welcome for the vendors, which was attended by APCE’s outgoing president, the Rev. Dr. Susan Sharp Campbell, and a time set aside for prayer. After the blessing, each vendor received a “swag bag” with Chicago knick-knacks accompanied by a thank-you note signed by each member of the Annual Events Team.

“We received immediate feedback that we were on the right track,” said Green-Ross. “Because of COVID, some vendors really had to go to bat to be here. They wanted to be here.”

Vendors such as the Presbyterian Publishing Corporation (PPC), which has sponsored the bookstore at the APCE annual event for many years, had to make their own adjustments and accommodations due to the pandemic.

“The PPC staff really worked hard to bring a bookstore here despite shipping complications,” said Cosby. “Because they couldn’t bring copies with them for people to buy and take home, they offered to ship all purchases to their homes for free. An unexpected advantage of this was that there was more room in the shipping containers for them to bring more titles. I was pleasantly surprised when I saw the variety.”

Cosby added that because circumstances were constantly changing in the weeks leading up to the annual event, close and frequent contact with vendors was paramount. 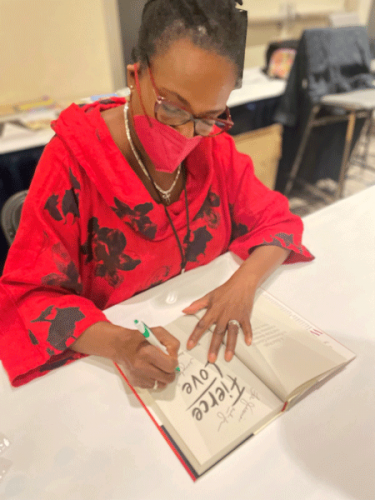 “Throughout the planning process, we were pivoting and pivoting,” she said. “Beyond the connection we’re building here in person, one of our main emphases was keeping vendors connected as changes occurred along the way. We had a lot of positive feedback on the many emails and texts that we sent. Having the blessing after we got here was a nice moment to celebrate the connection we had created and to look forward to the future.”

In yet another pastoral touch, Cosby and Green-Ross arranged for cardmaking stations in the Marketplace to thank first responders and hotel staff.

“Because we’re the people who have served others at church and have kept it all going, the hotel staff and first responders are ministering to us and giving us a sabbath,” Green-Ross said. “There’s a level of empathy that educators can have with essential workers.”

From the blessing to the book signing to a game of bingo, in which attendees had vendors sign their cards for a chance to win prizes, the Marketplace itself was a win from start to finish.

“APCE is more relevant now than ever,” said Green-Ross. “In a time when we’re set apart and separate, it’s by those connections — in a visceral way — that we know and are known.”