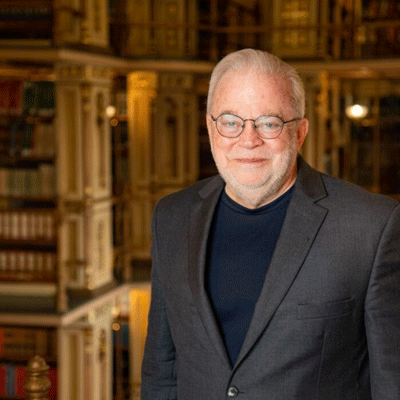 LOUISVILLE — For the past five decades, the Rev. Jim Wallis has been exploring the complexity and possibility of two of his favorite words, “justice” and “faith.” On Wednesday, Wallis, the founder of Sojourners magazine who now directs the Center on Faith and Justice at Georgetown University, delivered a talk at New York Avenue Presbyterian Church in Washington, D.C., exploring whether American democracy is even possible given the threats to voting rights, civil rights and any number of other challenges Americans are facing.

Wallis spoke as part of New York Avenue Presbyterian Church’s McClendon Scholar-in-Residence Program. More than 300 people heard the talk online, with another few dozen on hand in the sanctuary to enjoy Wallis’ presentation, the first in-person McClendon gathering in more than two years, said Theo Brown, who directs the program at the church. “Our program for tonight,” Brown said, “couldn’t be more timely or more important.”

The Rev. Joe Daniels, lead pastor of the Emory Fellowship in Washington, D.C., said it was his privilege “to introduce a giant in the faith and the cause of social justice.”

“He not only marched,” Daniels said of Wallis, “but more importantly, he organized.”

“Since I’m old, I’ve been boosted multiple times,” Wallis said to open his hour-long talk, adding that during the reception that would follow his talk, “I am very safe and huggable.” He proved it an hour later by exchanging a hug with the Rev. Dr. Sarah Johnson, senior pastor at New York Avenue Presbyterian Church.

“We all need mentors,” Wallis said, adding that one of his was the historian Dr. Vincent Harding, who served in the Rev. Dr. Martin Luther King Jr.’s inner circle and asked the question, “Is America possible?”

“We don’t yet know the answer to that question,” Wallis said. “I hope tonight you’ll go away understanding we must all answer that question ourselves.”

The challenge is twofold, Wallis said. “Unless we achieve a multiracial democracy, we will lose democracy altogether — and perhaps very soon,” he said. And “in all these pressing issues around voting rights, this indeed will be a test of democracy and also a test of faith — literally a test of the future of our churches.”

“History is watching, and young people are watching,” Wallis said. “If we don’t come down on the right side of history, a whole new generation is not going to come back to church. There’s a lot at stake.”

“I know many of you are tired of all the noise” surrounding the fury of what some people still call “the stolen election” of 2020, Wallis said. His balm was to recite Genesis 1:26-27: “Then God said, ‘Let us make humans in our image, according to our likeness, and let them have dominion over the fish of the sea and over the birds of the air and over the cattle and over all the wild animals of the Earth and over every creeping thing that creeps upon the Earth.’ So God created humans in his image, in the image of God he created them; male and female he created them.”

“I believe that text is the foundation for democracy and of every movement for rights, equality and freedom for each and every human person,” Wallis said. “We are all made in God’s image, created equally. That undergirds every movement for justice and equality that so many of us have fought for.”

“Do we believe this text or not?” Wallis asked. “Most of the students I teach are in the ‘none-of-the-above’ [religious] category. They have no religious affiliation, but most believe in God, and a lot know our texts. They don’t think we’re doing it, and that’s why they don’t want to affiliate with us.”

In fact, he said, the Genesis text “is a basis for a theology of democracy. Partisan politics will not be enough. We have to go to a theology [that includes] the dignity and worth of all of us. There has to be a spirituality of democracy to get past where we are now.”

Two-thirds of people 18 or older participated in the 2020 election, according to the U.S. Census Bureau. Wallis said a number of factors contributed to the high turnout, including increased voting access due to the pandemic, early and absentee voting and the proliferation of drop boxes. “You would think that would be something we could all embrace,” Wallis said.

Yet several state legislatures are eliminating what made voting relatively easy as Americans head into the midterm elections and the presidential election of 2024. Wallis noted that offering water and snacks to Georgians waiting in line to vote is against the law. “You’ll be arrested for obeying Matthew 25 there,” he said.

Even more alarming, Wallis said, is that 14 states have given legislators and judges the right to overturn the results of local elections.

“Making it harder for Black people to vote is very consistent with American racial history,” Wallis said. “If we believe all are made in the Imago Dei, denying the right to vote is silencing someone’s voice. It’s an assault on Imago Dei. It’s throwing away the very image of God. We’ve got to get theological, friends.”

Some of those who stormed the U.S. Capitol on Jan. 6, 2021, “carried flags and crosses and offered prayers inside the Capitol chambers after they took them violently,” Wallis said. “They named Jesus as they desecrated the temple of American democracy. I would call that blasphemy.”

Wallis labeled White Christian Nationalism “a heresy and a sin. Can I get an ‘amen?’ That day almost dealt a death blow to our democracy.”

He called preaching about voting rights “a pulpit test. Democracy is at stake — and also our faith.”

The problem with white Christians is “we have an adjective and noun problem,” Wallis said. “What is the operative word — white or Christian? If we’re honest, we know the answer for too many. The adjective ‘white’ is more important now than the noun ‘Christian.’ That is the fundamental discipleship ahead of us, making the noun more important than the adjective.”

“We can stand up and speak out on what Scriptures say. That’s my altar call tonight, and you don’t have to come forward,” Wallis said. “The altar call is to go out and put your faith in action, even if it gets us into some of that good trouble that John Lewis called us to. Amen? Amen.”