Make A Donation Click Here >
Home › ‘There is so much need’ 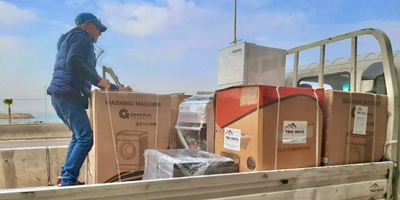 Volunteers with the Joint Christian Committee have been delivering appliances to people affected by last summer’s explosion in the Port of Beirut. (Contributed photo)

BEIRUT, Lebanon — The small open pickup truck, laden with large boxes, made its way cautiously down Alexander Fleming Street, an offshoot alley of Mar Mikhael Road, and just a few minutes walking distance from the Port of Beirut. “Hello! Hello,” Norma Irani warmly greeted Elias Habib, a youth leader of the Joint Christian Committee (JCC). “And you brought my new gas stove!” Irani, somewhere in her early 60s, was practically jumping with excitement. “I don’t know how to thank you,” she said, smiling broadly, “Come up, come up.” Hauling a big box on his back, the pickup driver carefully made his way to Irani’s third-floor flat. 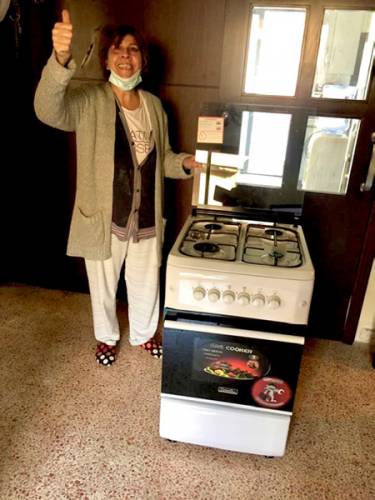 Habib met Irani in August, right after a large amount of ammonium nitrate, stored at Beirut’s port, explo­ded and killed more than 200 people, injured at least 6,500, and left an estimated 300,000 homes heavily damaged. Irani’s flat was destroyed, and she had sought the cleanup help of JCC, housed in temporary headquarters in a destroyed restaurant on Mar Mikhael Street. At the time, Habib led a group of about 20 Palestinian youth, ages 16 to 24, from Dbayeh camp. The youth spent three months immersed in the area’s cleanup efforts. 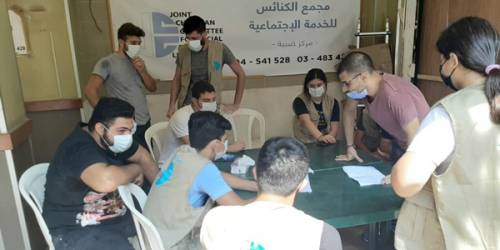 Youth and leaders of the Joint Christian Committee for Social Services in Lebanon prepare to continue cleanup efforts in devastated areas of Lebanon. (Contributed photo)

The JCC group cleared mountains of glass and wood debris from more than 600 homes, carrying hundreds of heavy sacks down countless floors. JCC simultaneously surveyed the households visited to assess urgent needs. Parents had then asked JCC to procure for their children some toys to soothe the loss of treasured toys and games blasted away in the explosion. And as schools had started, they also asked for some much-needed stationery. 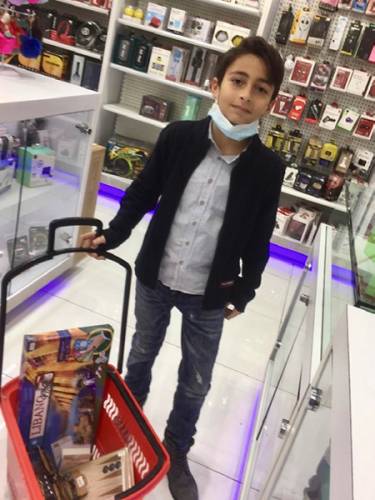 Parents asked if JCC could provide some games and toys for children to replace those treasures lost in the explosion. (Contributed photo)

“We weren’t always this poor,” explained one mother shyly. “A year ago, we would have been able to buy our children’s things ourselves and not ask for your help. But everything is so different now.” This is, sadly, the new Lebanon — a country sinking under an unprecedented dire economic crisis, a currency that has lost almost 80% of its value, and hyperinflation of prices for necessities. The pandemic has served to ignite the further collapse of the Lebanese economy. For those still lucky enough to have jobs, salaries have dwind­led to a few meager dollars — barely enough to cover food, let alone buy other goods. Thanks to donors, the JCC was able to procure gift cards for many of the children in the disaster area. Overjoyed youngsters headed to the stationery shop and chose new toys, pencils, pens, notebooks, erasers and odds and ends of school supplies. The adults also received precious gifts: coupons to be used for food and household items at the local supermarket. Their gratitude was overwhelming. 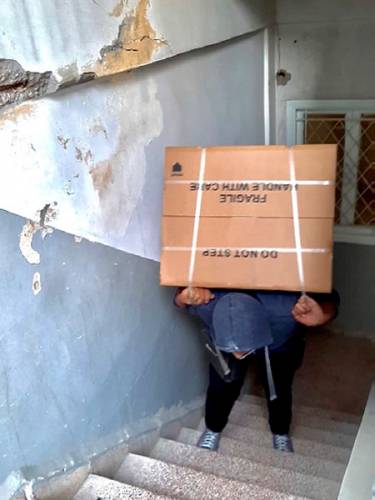 Some appliances had to be carried to third-floor flats. (Contributed photo)

The JCC’s latest project: appliances. Many fami­lies had been living without the necessary large household appliances — most notably, gas stoves, heaters, washing machines and fridges. It was the same story. These once re­latively affluent families had no means of buying them. They again turned to the JCC.

And so it was that the JCC began delivering appliances to 60 families who were deemed most in need. Habib left Irani excitedly examining her new gas stove and checked his list.

Next was Joseph Ghrayeb. His flat, nestled in a turn-of-the-century-old building with arched windows and a red-tiled roof, was severely damaged. Ghrayeb had requested a washing machine. His elderly mother’s vision was failing, and she could barely see, so washing clothes by hand had become difficult. Again, the pickup driver hauled a box on his back and climbed the three flights of stairs. The machine was delivered. 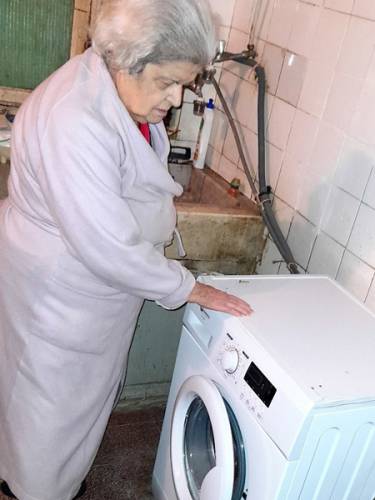 As Habib returned to the street to check his delivery list, a man came up to him. “Do you provide televisi­ons?” he asked. “No,” replied Habib. “I am afraid not.” The man was visibly upset. “Please come to my home,” he said.

Habib obliged. An elderly woman, clad in black, smiled sweetly as the men entered the flat. It was an Armen­ian family. Rafi Tossonian, 45, pointed to a television screen on the table. “It doesn’t work,” he said. “And we can’t buy one.” Next to the nonfunctioning TV was a metal watch perfectly split into two halves. Tossoni­an grabbed it and showed it to Habib.

“My father was wearing this when the explosion hap­pened,” he said. “That’s all I have left of him.” On August 4 at 5:45 p.m., his 85-ye­ar-old father left the family’s tailor shop and headed home. His wife and son were to follow soon.

At 6:07 p.m. the neighbor­hood shook violently. Blood-soaked and shock-shelled people emerged into the streets. Tossonian ran home. His bloodied father was lying on the floor of the apartment with hundreds of glass shards protruding from his body. Hence the sliced metal watch. “Please, do you have a television for us?” Tosso­nian asked quietly. “Let me see what I can do,” answered Habib. Tossonian nodded gratefully.

Outside, Habib sighed heavily. He has been leading JCC’s work in the disaster area since the day of the blast. He has seen it all. The damage, the tears, the defeat, the helplessness. “There is so much need,” he said, frustra­ted. “We can’t help everybody. How can we?” He was silent for a few seconds. “There is nothing worse than turning away people who need you,” he said. “But we can only give as much as we are given. That’s just the way it is.” Habib turned back to the van. The exhausted pickup driver was looking over the boxes. Three more deliveries today. Tomorrow, they will start again.

Our gratitude goes to ACT Alliance, a partner of Presbyterian World Mission and Presbyterian Disaster Assistance, the United Methodist Committee on Relief and the Church of Finland for allowing us to give some happiness to some of the families devastated by the Beirut explosion.

In the past decade, Presbyterian Disaster Assistance has provided more than $700,000 to support grant projects of PC(USA) partners in Lebanon/Syria. Consider making an online gift through PDA for ongoing humanitarian response at this time of great need.