Support disaster response this hurricane season, GIVE NOW
Make A Donation Click Here >
Home › ‘There is a culture war going on in this war, and poor Ukraine is stuck in the middle’

The Rev. Dr. John Burgess of Pittsburgh Theological Seminary explains the religious dimensions to the crisis in Ukraine 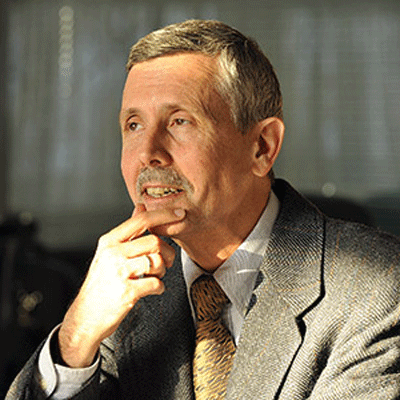 LOUISVILLE — The Rev. Dr. John Burgess has never lived in Ukraine. But over the years he and his family have enjoyed three extended stays in Russia, the final time in Belgorod, a small town near Russia’s border with Ukraine.

Burgess, the James Henry Snowden Professor of Systematic Theology at Pittsburgh Theological Seminary, said he began learning to speak Russian at age 48 to spend a year along with his wife and three daughters in St. Petersburg in 2004-05. Seven years later they spent time with one daughter in Moscow with Burgess serving as a Fulbright Scholar. Burgess and his wife experienced the third stay, this time in Belgorod, a few years back. In 2017, Yale University Press published his book, “Holy Rus’: The Rebirth of Orthodoxy in the New Russia.”

Before the Russian invasion, friends in Belgorod were texting Burgess photos of Russian tanks and the large troop buildup near the border. “We knew something was up” even before the invasion occurred, Burgess told Hinson-Hasty.

Because of Russian President Vladimir Putin’s crackdown of independent media sources in Russia, “the war took Russians by surprise … It was a shock, just unbelievable,” Burgess said.

The Eastern Orthodox Church in that part of the world goes back more than a millennium. In 988, Prince Vladimir, also known as Vladimir the Great, chose to be baptized into the Eastern Orthodox faith by missionary priests from Byzantium in what is now Crimea. “In those days, if the prince became one religion, all his people did by default,” Burgess said. That baptism also served as the root for the Russian Orthodox Church. By the Middle Ages, the center of orthodoxy had become Moscow rather than Kyiv. 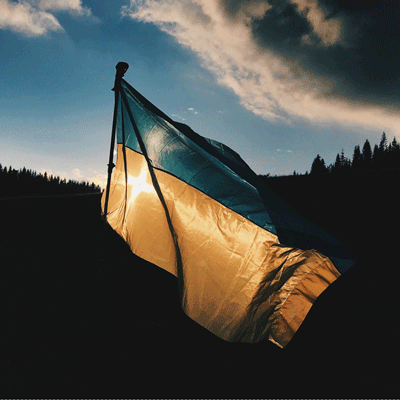 The flag of Ukraine (Photo by Max Kukurudziak via Unsplash)

In 1991, Ukraine became independent, “and the religious landscape got more complicated,” according to Burgess. There were Orthodox churches who wanted to be independent of Moscow and the Russian Orthodox Church. Moscow called them schismatics, but the ecumenical patriarch Bartholomew declared them to be a legitimate Orthodox church. “Now there are two dueling Orthodox churches,” Burgess said, “one loyal to Moscow, the other loyal to Kyiv.”

Further complicating matters, the Moscow church in Ukraine “has taken a strong position against the Russian incursion,” Burgess said. “The bishops and priests are taking their lives in their hands. They are the only ones who have said, ‘President Putin, the hostilities must cease. We stand with the Ukrainians.’”

Assuming Putin prevails in the conflict with Ukraine, “What will happen to these bishops and priests who have spoken out against him?” Burgess asked.

Putin “calls himself Orthodox,” Burgess said. “He attends Orthodox worship services on Christmas and Easter.” He was baptized as an infant and enjoys having his picture taken with Patriarch Kirill of Moscow.

Putin “definitely sees the church in Russia as being on his side,” Burgess said. “He likes the blessing of the church for what he does.” For his part, Patriarch Kirill has not spoken about the invasion but “thinks Russia is under assault by the West and Western values, which is trying to impose its values on Ukraine.”

There’s tension around what Russians call traditional values, Burgess said, including sexuality, abortion, an emphasis on patriotism and a respect for authority. “The Russian Orthodox Church under Patriarch Kirill believes the West is threatening these traditional values. There is a culture war going on in this war, and poor Ukraine is stuck in the middle.”

The hero of the Ukrainian resistance, President Volodymyr Zelenskyy, has not had to fight the same religious battles as some of his predecessors because he’s Jewish, although the former comedian is a non-practicing Jew. “But he’s a patriot,” Burgess said. “He believes in an independent Ukraine, one that is able to determine its own path.”

One could say this is not a religious war, according to Burgess. Practicing Christians are a tiny percentage of the population. On any given Sunday in Moscow, only 1% of the population is attending church.

The Russian Orthodox Church “has always been very close to the state and the rulers,” Burgess said. “It’s always been seen as a pillar for social stability.”

Russia’s message has been “Don’t let the West divide us. Don’t take Ukraine away from us,” Burgess said. “But many in Ukraine say, ‘Even though we have been part of the Russian empire and the Soviet Union, we have a distinctive language, history and heroes. We have never been absorbed into the rest of Russia.”

In the Orthodox Church, Lent began on Sunday night, Burgess noted. Typically it begins with “a beautiful vesper service called forgiveness vespers. What a powerful testimony that should be in a time of war!”

The war thus goes on even as Orthodox Christians “are praying for forgiveness from one another and from God,” Burgess said. “That would be the prayer we can all join in.”

Another tragedy of the conflict is that Putin has shut down “what was left of the independent press,” Burgess said. “Russians today have less democracy and less freedom of speech than they did before the war.”

Sadly, “many Russians really do believe the Russian press” that’s controlled by the state. “This is painful for me personally,” Burgess said. “They have been so kind to me and my wife. To hear the poison, the anger and the hatred some have toward Ukraine, how do I respond? I feel arguing with them is not going to get us anywhere. Long-term I am really committed to those relationships. I want them to be honest, but I want us to see our way through this difficult time.”

“I hope we won’t forget the Russian people in the midst of all this,” Burgess said. “The Ukrainians are the victims, but war brings incredible suffering, even to those who are the aggressors.” Many Russians oppose the war “and don’t know how to speak out.” The ruble has lost most of its value, “and dead bodies are going back to Russia,” Burgess said. “Let’s not forget the war is doing terrible things to the people of Russia.”

In a prayer to conclude their time together, Burgess prayed for forgiveness. “We pray that each of the parties, including us in the West and the U.S., will examine ourselves again and recommit to those who see things differently and see themselves as our enemies.”

“May your peace,” Burgess asked God, “accompany us through these weeks until we come to the cross and the joy of Christ’s resurrection.”

Click here to give to the PC(USA) response to the humanitarian crisis in Ukraine and Central Europe.

Hinson-Hasty’s guest for the March 16 episode of Leading Theologically is pastor and author John Pavlovitz, author of “If God Is Love, Don’t Be a Jerk: Finding a Faith that Makes Us Better Humans,” published last year by Westminster John Knox Press.