Make A Donation Click Here >
Home › The thread of bondage

Sunspots, the Synod of the Sun podcast, takes on the Supreme Court and other institutions where recently justice isn’t readily apparent 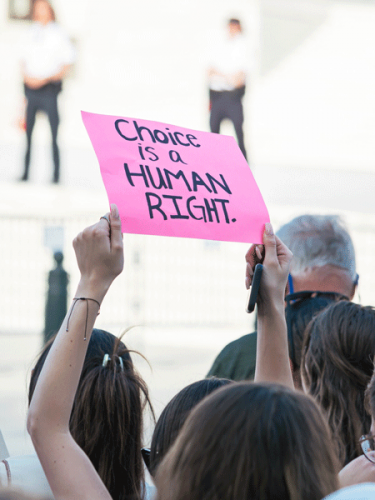 Photo by Gayatri Malhotra via Unsplash

LOUISVILLE — As they did earlier this year, three thought leaders in the Synod of the Sun joined their hearts, minds and voices this week while recording the most recent edition of Sunspots, the synod’s podcast. Listen to their conversation here.

The three — podcast host Rev. Elizabeth Brinegar along with Natarsha Sanders and Sarah Leer — called their 54-minute conversation “The Thread of Bondage,” based at least initially on the U.S. Supreme Court’s decision last month to overturn historic abortion rights in place since the high court’s Roe v. Wade ruling in 1973.

Brinegar is pastor of First Presbyterian Church in Jacksonville, Arkansas, as well as the chair of the synod’s network for dismantling racism and the operations director for the synod’s ecumenical mission, Solar Under the Sun. Leer is a practical theologian and a former Young Adult Volunteer in New Orleans who’s serving First Presbyterian Church in Dallas. Sanders founded Centering the Sacred with her husband, Lorenzo, and is passionate about inclusion. Both Sanders and Leer are doctoral students in educational ministry in the same cohort at Columbia Theological Seminary. 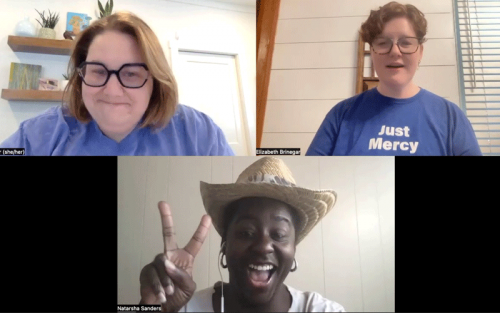 Participants in the most recent edition of Sunspots were, clockwise from top left, Sarah Leer, the Rev. Elizabeth Brinegar and Natarsha Sanders. (Screenshot)

“We believe that learning about God should change our lives,” Brinegar said at the outset of the podcast before asking: “What do we as individuals feel our faith is saying about this ruling?”

“Did we not see this coming? Did they not tell us this was in the works?” Sanders asked. “There is a thread of bondage that has weaved is way into the foundation of our nation.”

“I know that can be tiring to hear, but we are going to keep hearing it because it is still necessary, and we are still bound,” Sanders said. A quick online search reveals that states that allowed people to be enslaved up until 1865 and states restricting abortion rights or preparing to do so are practically the same, Sanders noted. “In 2022, the thread of bondage has gotten tighter and has become more apparent. People are starting to say, ‘Wait a minute.’”

“If you were not in the fight earlier, now’s the time, friend,” Leer said. “If that means looking at your personal finances to get some skin in the game” or investing time and energy, get busy, Leer urged. “You can write beautiful liturgy all day long, but what are you going to do beyond that? What are our communities going to do?”

Sanders offered one caution, courtesy of the Rev. Traci Blackmon, Associate General Minister of Justice & Local Church Ministries for the United Church of Christ: This is not the time to learn how to ride a bike.

“If you aren’t ready to jump in, that’s all right,” Leer said. “Stay on the sidelines and help fix up bikes or distribute beverages. We are all in the web of interdependence in the struggle for liberation.”

The fight does, however, necessitate showing up, Brinegar said.

“Colleagues and friends have accompanied people at [reproductive health] clinics for a long time, serving on boards and giving funds and sounding the alarm,” Leer said. “Rosa Parks didn’t one day say, ‘My feet are tired.’”

Parks “was not the first person to refuse to move,” Brinegar said. “But she’s the one we hear about. She was trained for that moment.” 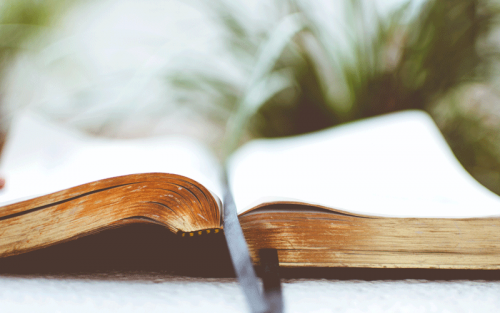 Sanders then turned to the prophet Joel for further guidance.

“I like those minor prophets. They spoke short and strong. They ain’t got all day,” Sanders said. Their prophetic message: “I’m gonna say what the Lord told me to say and then I’m gonna go about my business.” Here was Joel’s message in a nutshell, Sanders said: “Wake up. Weep. Lament and pray for the nation. Gather the elders and then cry out to God. Fast and then obey the direction of the elders.”

Gather the elders “because they’ve been here before,” Sanders said. But society has to some extent made prophesying “taboo. We put legalese on everything. ‘Don’t tell people you were held captive. They’ll feel bad about themselves.’ But it’s the truth!” Sanders exclaimed. “You don’t even want me to tell my story? The Bible says the elders are to tell their story — not just the story of those in bondage, but those who put people in bondage.”

“We are all part of the system of oppression. It’s part of the reason I like being Presbyterian and confessional,” Leer said. “I need space to confess my complicity and our complicity, but I’m not going to stay in it. We confess and we respond, but in the end we are going to be charged and motivated. We have to move out into the world assured of our belovedness … Part of our job is to push people outside those walls [following worship]. The institution is not going to save us. The institution is not God.”

Sanders was recently speaking to someone who was encouraged by this popular quote by the Rev. Dr. Martin Luther King Jr.: “The arc of the moral universe is long, but it bends toward justice.”

Brinegar recalled writing a paper in seminary on Amos’ prophecy that envisions justice rolling down like water and righteousness like an ever-flowing stream. Students were asked whether they found Amos’ vision “forceful ideology” or “peaceful.”

“I was the only one who said peaceful, and I think I was wrong,” Brinegar said. “There is a force to justice and righteousness. You’ve got to do the hard work, and the hard work isn’t going to look like peace.”

“My prayer,” Sanders said, “is people will wake up to the power they have and then begin to fight for others’ liberation — because it includes their own.”