…be led forth in peace. (Isaiah 55:12). Support to the Peace & Global Witness Offering.
Make A Donation Click Here >
Home › The Rev. Rachel Penmore, who leads UKirk campus ministry at the University of Tennessee, discusses the work of nurturing young adults 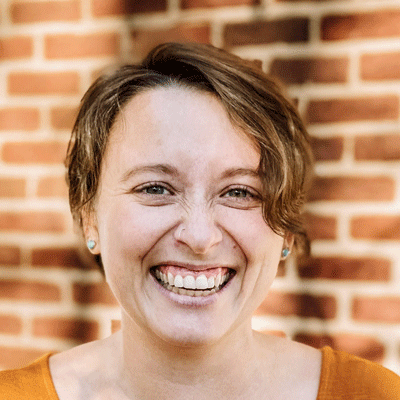 LOUISVILLE — The pandemic taught the Rev. Rachel Penmore to pay closer attention to “the smaller pieces” of campus ministry.

“What makes me come alive is when people feel known, when I’m interacting with students or other folks and they feel seen and heard and known,” said Penmore, the director of campus ministry at UKirk at the University of Tennessee in Knoxville. Penmore was the guest Wednesday of the Rev. Dr. Lee Hinson-Hasty, senior director for Theological Education  Funds Development for the Committee on Theological Education of the PC(USA) and the Presbyterian Foundation, during his “Leading Theologically” broadcast, which can be seen here.

It’s that sense of connection that many of us lost during the pandemic, Penmore said. “When you’re able to feel safe in someone’s presence and feel safe to bring the fullness of who you are and who you are becoming … into that space — when I feel trusted with that, and I know it takes work together, those are moments when ministry has meaning, because it doesn’t always feel that way.” Most days, doing campus ministry feels more like “moving tables and picking up food and buying 80 cases of Cheerwine,” Penmore said with a laugh.

“I can see you’re somebody who notices,” Hinson-Hasty told her. “What are some practices to help you see and hear and recognize and name?”

Part of it is empathy, Penmore replied. “I study body language. What are the subtle ways people are telling me how they’re feeling?” she said. “People say so much with their body that often the words are secondary.”

“I’ve learned to look for the person who’s not the loudest in the room,” Penmore said. “I’m always paying attention to who gets missed. More often than not it’s about the ministry of presence, just sitting next to someone and letting them know that you see that they’re there.”

A friend recast the Parable of the Lost Sheep as the Parable of the Incomplete Community. “It’s not about this one lost person. It’s this community is not complete without you,” Penmore said. “That’s how I try to approach each person I interact with in ministry: You’re going to make our community different and better and more unique and sometimes a little weirder, but we’re just a bunch of weirdos all flopping Godward.”

“Faith is such an ungraceful process. We think for some reason somebody else is doing it well and better,” Penmore said. “We’re all just getting up every day hoping we’re flopping in the right direction. It’s a messy, beautiful process.”

UKirk in Knoxville meets for worship — and more — each Wednesday evening. “This is a place where [students] know they will get free food,” Penmore said. A recent study of universities in the Southeastern Conference showed 1 in 3 students are food insecure. Students, she said, gravitate to “the idea they know there will be a meal here every week and a no-pressure worship service where they can sit in the back.” It’s a “level of grace that I feel too. … Sometimes the bread and juice go down smoothly, and sometimes we choke on them.”

“A huge part of ministry,” Penmore said, “is checking in, catching up and remembering what’s going on with each other.”

Penmore is not a big fan of social media, but she does administer four separate accounts. “Social media helps me know the fullness of what [students] are doing,” she said. “People 18-35, this is the time with the most amount of change in your life. They are figuring out their identity and who they want to be in the world. Some students are learning and acknowledging their gender identity for the first time. There’s an unbelievable amount of change, and social media gives you access to lots of other people doing that, which normalizes a lot of things.”

Asked by Hinson-Hasty what guides her theologically, Penmore immediately went to baptism.

For students, “this is a critical time of faith, trying to figure out who God is independent of what my parents believed and how I was brought up,” Penmore said. “When we baptize babies, we say as a community, ‘I will love you and support you on your faith journey.’ That applies to all these kids, especially when they come to college. They are in their mid-20s and they don’t know how to make friends and they struggle with jobs and relationships. That’s when we need to say, ‘Let me walk alongside you as you’re rolling around these questions and deconstructing and reconstructing and figuring all this out.’”

“We owe it to young adults as they’re figuring out their faith,” Penmore said. “If the church doesn’t do that, we’re expecting them to fit in a model that doesn’t exist anymore.”

Penmore and her students have begun a monthly program called Liturgy Lagniappe, a term that means “to enhance” or “to add to.”

“It’s our way of enhancing ‘the work of the people,’” Penmore said, citing the definition of “liturgy.” Students are asked to write down questions and put them in a cup. Once each month, questions are pulled out of the cup for discussion. “It’s an amazing ministry model that requires zero preparation on the minister’s part,” Penmore told Hinson-Hasty. “It tells you exactly where your folks are, and it has steered my sermons because you know what your people are interested in.”

Asked to by Hinson-Hasty to give viewers a blessing and a charge, Penmore asked God to “send us out into the world to be awakened and enlightened and surprised at where you’re already at work and where you’re calling us to join in. Wake us up. Breathe your Spirit into our weary spirits and remind us of who you have called us to be. Amen.”