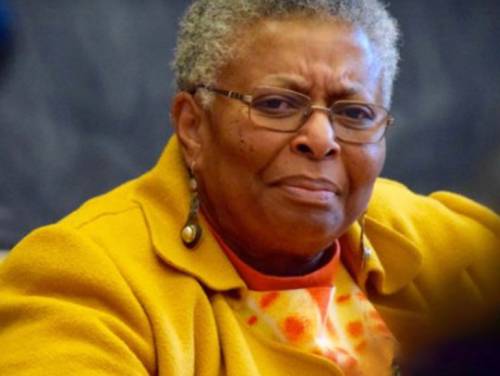 The Reverend Doctor Katie Cannon represented the best of contemporary scholarship through her use of “down home” southern African American culture shaped by a strong sense of connections to contemporary womanist and movement theology. Her theological gifts were shaped by humble beginnings in rural North Carolina. As the first African American Woman ordained in the United Presbyterian Church in the U.S.A., she represented the power of faith and love despite the tensions of both race and gender struggles within the denomination and the academy. Her ordination gave rise to a new call understanding in the denomination and the African American community. Katie was a pioneer and witness to the biblical call to make disciples of all nations in a period of gender and racial strife in both the Church and broader society. She dared to believe that an African American woman from rural North Carolina, graduating from the only African American Presbyterian Seminary (Johnson C. Smith Theological Seminary) in the Presbyterian Church (U.S.A.), could dare to enter an overwhelmingly white theological academy and make a difference.

The powerful witness to her work for the Lord is that she told her story without compromise as to how the Lord God, through Jesus Christ and the Holy Spirit, gave her enlightenment and life. Her quick wit was not to be mistaken as “throw away lines,” but grounded in a sense of expressing some hard truths in ways that all could understand. She was a powerful expression of a rural upbringing that was not compromised by scholarly acclaim or ivory tower lectures. Her truth was made plain by her commitment to following Jesus’ words, “You will know the truth and the truth will make you free” (John 8:32). Katie now rests in power with all the saints who sought to make the Church a viable expression of God’s will for the age to come. Her legacy and life will continue even in death.

Our prayers are with the family during this time. Her mother Corine, and siblings Sara, Doris, Sylvia, John Wesley, and Jerry.

To honor her name and her legacy, a scholarship fund has been established for women of color to attend leadership development events. Those wishing to donate towards the scholarship should click here to donate online or include #E049991 on the check to designate the donation.

“Katie Cannon had a heart of gold and mentored many women of color, myself included,” said Rev. Dr. Diane Moffett, president and executive director of the Presbyterian Mission Agency. “I have been tremendously blessed by her life. She taught us to be radically inclusive and touched many lives. Though this is a tremendous loss, Katie’s imprint is on us. It is her shoulders that we stand on today, she is now among those great cloud of witnesses.”

“Rev. Dr. Katie Geneva Cannon is an important part of the landscape and contemporary history of the Presbyterian Church (U.S.A).Katie was brilliant and remarkable, and also down-home and humble,” shared Rev. Dr. Rhashell Hunter, director of Racial Equity & Women’s Intercultural Ministries. “It was easy to talk to Katie and to become her friend. Yet, she also had a way of challenging you to rise to the next level. I will never forget one of her objectives about our quest on behalf of those who are African American, female and clergy — ‘to make visible our curious invisibility’. What poet Alice Walker said describing “Womanists” also described Katie, ‘willful, serious, loving, and committed to survival of entire people, male and female.’ Dr. Cannon’s remarkable intellect, humor and spirit will be sorely missed.”

Cannon was the Annie Scales Rogers Professor of Christian Social Ethics at Union Presbyterian Seminary in Richmond, Virginia, and the first African-American woman ordained as a Minister of Word and Sacrament in the former United Presbyterian Church (U.S.A.). She was also a minister member of the Presbytery of Philadelphia.

Cannon, a leading voice in the subjects of womanist theology and women in religion and society, was a renowned lecturer on theological and ethical topics and the author or editor of numerous articles and seven books, including Katie’s Canon: Womanism and the Soul of the Black Community and Black Womanist Ethics.

“We join the voices of gratitude for the life and ministry of the Rev. Dr. Katie Geneva Cannon, and extend our condolences to Dr. Cannon’s family and friends,” the Co-Moderators of the 223rd General Assembly, elder Vilmarie Cintrón-Olivieri and the Rev. Cindy Kohlmann, said in a statement. “Though we had not met her personally, we have known her through the people she taught and mentored, and through her impact to the body of Christ. A trailblazer, educator and faithful leader, her example and life journey compel us to serve and to act. Rev. Dr. Cannon was presented the Award for Excellence in Theological Education at the 223rd General Assembly (2018). In a video presented during the award breakfast, she shared some words about her call: ‘Teaching is my ministry. I love teaching; to empower; to equip; to set people free; to live into the graces and gifts [the students] have been given.’ May we honor her words and life as we mentor and disciple new generations in building the kindom of God. Que descanse en paz, Dra. Cannon.”

The Presbytery of Philadelphia also issued a statement, saying, “While we grieve the loss of Rev. Dr. Katie Cannon, her prophetic presence and pioneering spirit will continue to encourage the saints to press on in their faithful work and public witness as the Church of Jesus Christ called to ‘think with our hearts and feel with our brains’ (Princeton Theological Seminary Women’s Conference, 2017).”

We keep her family in our thoughts and prayers including her mother, Corine L. Cannon, the Revs. Jerry Cannon and Veronica Cannon, along with her sisters, brothers, nieces and nephews. Thanks be to God for her amazing witness.