Stops along the way include insurance, seminary, congregations and mid councils 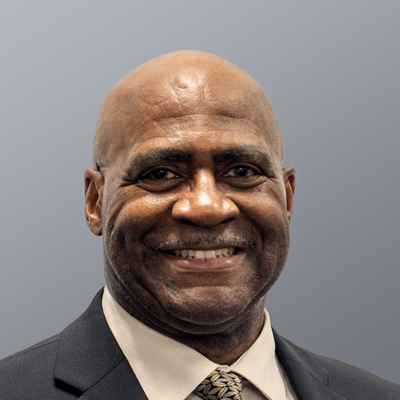 JEFFERSONVILLE, Indiana — When the Rev. Dr. Craig Howard describes the journey that led him to become the Foundation’s newest Ministry Relations Officer, he says that it all began with his work as an insurance agent.

Once you learn his story, you can see the path he took from insurance to church life — even though it’s unconventional.

“I come from five generations of pastors in the Black church, and I was sure that I definitely did not want to be a preacher,” Howard says. His oldest brother is a pastor as well and, as Howard described it, “I ain’t that guy.”

Instead, he worked as an insurance agent for close to two decades, honing his sales, entrepreneurial and financial skills. But during that time came the tugging, the gentle prodding in the direction of ministry. This eventually led him to pursue an MDiv degree while still working in the insurance industry. Soon after graduation, Howard found himself at McCormick Theological Seminary as the Director of Recruitment and Admissions. He was serving the church without actually being in the church context. He began to take on other roles as well, serving as the Sunday school superintendent of his local church — a role which had him overseeing the education of 800 students in 27 classes taught by 65 teachers. “This was my way of expressing my call through the organizational role,” Howard says.

In his work at McCormick, he had many chances to talk with students about the different ways of understanding and the expression of a call beyond being a pastor in a church. By the time he left McCormick in 2011, he was the seminary’s Chief Development Officer. “What happened in the midst of that is that I became a pastor in a church, and all the while, God is laughing,” Howard says.

His pastoral training included a field education study at a Black church and a Hispanic/Latinx church, followed by interim work at a Korean church and a call at a white rural congregation in 2009. Howard, a native of Chicago, found himself in rural Wisconsin, a long way from where he began.

In the midst of each of these calls, Howard continued to work bi-vocationally in fundraising. “It was hard work, doing both the fundraising route and the pastoral route at the same time. But the entrepreneurial and financial part of me really wanted to help churches figure out how to navigate their financial situations,” Howard says. That door, however, did not seem to be opening.

The door that did open was one of presbytery leadership in 2013. “I did not want to be a traditional presbytery executive doing policy, so when the Presbytery of Milwaukee offered me the position of Executive Director for Strategic Partnerships, it sounded creative and entrepreneurial,” Howard says. And he loved it! “I was a pastor to the pastors, helping them through challenges, and it was great work,” he says.

From Milwaukee, he moved to St. Louis to serve the Presbytery of Giddings-Lovejoy in 2017, partly so that his wife could be closer to family. It was a challenging time for the presbytery, having just lost a large congregation that left the denomination and experiencing challenges with race as well as with finances.

“We were able to build relationships; we built up finances, made connections with pastors and leaders and did tremendous work on the race piece,” Howard says.

Call to the Foundation

Then COVID-19 hit. “I believe that in many ways COVID has been an accelerator,” Howard says. After designing and restructuring the presbytery, helping congregations move to online worship through grants, and seeing the presbytery’s bright financial future, Howard realized that he had completed his work of helping to turn around the presbytery and it was time to move to whatever might be next. “Working with the Foundation had been something I was interested in for quite some time, but there had never been an opportunity,” Howard says.

“One of the issues that has changed over the past decade is the presence of diversity in the fundraising and financial sector,” he says. When Howard was first doing fundraising he rarely ran into another African American.

As he began to do more research about what it might actually look like to serve at the Foundation, he realized it was right up his alley. “This is great stuff. Budgeting, stewardship, building relationships are all what I have been doing in my work at McCormick, as a presbytery exec and in my fundraising days,” Howard says.

Vision for the future

Howard is accustomed to serving in challenging situations, and that’s what appealed to him about the Foundation position. He knew that he would be consulting with congregations that might be struggling after the pandemic, and he felt called to step in and help.

“The challenge is coming alongside some 1,100 congregations in a way that people feel as though they matter, because they do,” Howard says. “And we are their colleagues in ministry.” He is also looking forward to helping the Foundation connect in an even deeper way with racial and ethnic congregations, as well as seeking ways to help churches face the challenge of the future.

“My hope is that the church will see the Foundation as the one who walks alongside them in the midst of the challenges they face and to live into the unknown, knowing they are not alone,” Howard says. Not as a servant, nor a master, but as a partner and a colleague.

For Howard, to do so is an honor and a gift.

Erin Dunigan is an ordained evangelist and teaching elder in the PC(USA). She is a graduate of Princeton Theological Seminary. She is a photographer, writer and communications consultant and lives near the border in Baja California, Mexico. Send comments on this article to Robyn Davis Sekula, Vice President of Communications and Marketing at the Presbyterian Foundation, at robyn.sekula@presbyterianfoundation.org.