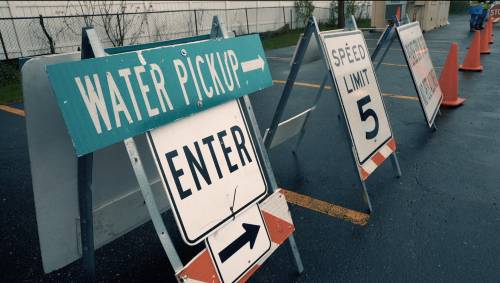 Signs guide Flint residents to bottled water in “Flint: The Poisoning of an American City,” a new documentary from Story Productions, a ministry of Presbyterian Disaster Assistance. (Photo by David Barnhart)

LOUISVILLE — Somewhere in the swirl of movie stars, auteurs, paparazzi and snow at this year’s Sundance Film Festival you could find the Presbyterian Church (U.S.A.).

“Flint: The Poisoning of an American City,” a nearly-completed documentary about the water crisis in Flint, Michigan, by Story Productions, a ministry of Presbyterian Disaster Assistance (PDA), will be shown as a work-in-progress preview at a screening room in Park City, Utah, this weekend.

“Flint” is the latest film directed by David Barnhart, PDA’s associate for Story Ministry, whose other credits include “Trigger: The Ripple Effect of Gun Violence” and “Locked in a Box,” which looks at the U.S. immigration detention system.

The preview showings of the film, which is in the final stages of post-production, are being organized by Water Rising, a Detroit-based not-for-profit.

” ‘Flint: The Poisoning of an American City’ is an incredibly timely and relevant film because it explores the critical question of how this could happen in an American city, and this serves as a warning for the rest of the country,” Alicia Douglas, founder and executive chair of Water Rising and Cities Rising, said in a statement. “This documentary educates but also enrages and moves people to some kind of action — and in that process, radically changes how we view and value water.” 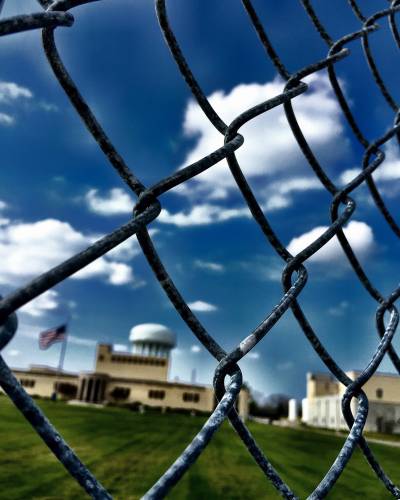 The Flint water tower is shown in “Flint: The Poisoning of an American City,” a new documentary from Story Productions, a ministry of Presbyterian Disaster Assistance. (Photo by David Barnhart)

For those who will want to take action after seeing this film, PDA is developing an accompanying study guide that will help viewers process and learn about the next steps they can take in their own communities and on a national level. The film is expected to be completed and begin distribution in the coming months.

In her statement, Douglas said the film will be shown to environmental leaders and other film festival programmers. The weekend could be important in determining how the film is distributed and presented.

Sundance, the largest independent film festival in the United States, is known as the launch pad for many celebrated feature films and documentaries. While the festival boasts a long list of official selections competing for coveted awards, a lot goes on at the periphery of the festival, including showings of other films seeking notice and distribution.

The film is still a work in progress and obviously was not completed by the Sundance deadline, but Barnhart said he’s deeply grateful for the opportunity to share the film and the story of what has happened in Flint.

“It will be an incredible opportunity to share this with influential environmental leaders, and I hope it can be resource and catalyst for them to organize community dialogue and engagement with these issues in their own cities,” he says.

Like all his films, Barnhart says he hopes “Flint” will motivate people to take action. The Flint water crisis made national headlines in 2016 when the government declared the water unsafe to drink and advised residents to use only bottled or filtered water.

It was a crisis more than a century in the making, resulting from a combination of waste dumped into water sources and aging lead pipes. 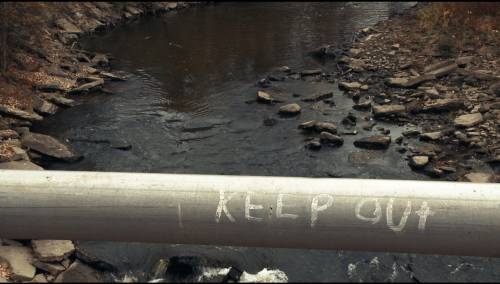 Pollution from the Flint River contributed to the Flint water crisis as shown in “Flint: The Poisoning of an American City,” a new documentary from Story Productions, a ministry of Presbyterian Disaster Assistance. (Photo by David Barnhart)

“One-hundred-thousand people in an American city have been poisoned by lead, which will affect them for the rest of their lives, and practically no one is talking about it,” Barnhart says. “Flint is just the latest chapter in the ongoing normalization of daily shocking events, which is numbing us to both human suffering and environmental devastation.

“I strongly believe Flint cannot be normalized and I think people need to be confronted with all the factors that have led to what happened there. Residents of Flint feel their voices were taken away.  It is this erosion of citizen access and voice which has led to so many disastrous decisions being made by those in power. It is clear Flint is just the tip of the iceberg.”

“Flint is a warning,” Barnhart says. “The question is, are we paying attention? Are we looking at our own neighborhoods and cities and collectively confronting these issues?” 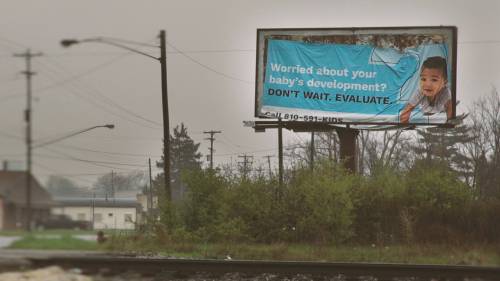 A billboard in Flint illustrates the pain residents have endured from the water crisis as shown in “Flint: The Poisoning of an American City,” a new documentary from Story Productions, a ministry of Presbyterian Disaster Assistance. (Photo by David Barnhart)

Judging by a key early reaction, the film is already making people pay attention. Josh Jackson, editor-in-chief of influential modern culture magazine Paste, saw a preview of “Flint” and wrote, “It’s a fantastic doc about the history of a great American city and a great American tragedy that will enlighten and enrage you in equal measure. State government incompetence, institutional racism, criminal negligence.”

Barnhart says he has also been contacted about the possibility of screening the movie in August at Stockholm World Water Week, which is to water what Sundance is to film.

But first, the film goes before some of the influential eyes at Sundance.