Building a Life of Faith. Support the Pentecost Offering..
Make A Donation Click Here >
Home › The image of the golden calf and other lost opportunities

The Rev. Bertram Johnson opens NEXT Church gathering with a sermon looking back at the Exodus and ahead to racial justice 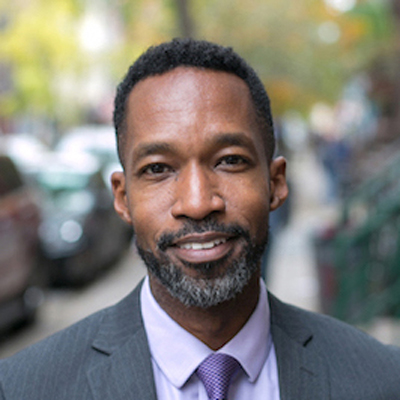 LOUISVILLE — Opportunities are broken, the Rev. Bertram Johnson told the NEXT Church gathering Friday, when we worship anything but God. And for anyone who needed proof, he cited Exodus 32:1-20, the story of the tablets that Moses broke, furious that while he was atop a mountain to receive the Ten Commandments, Aaron allowed the people to construct a golden calf to worship. Moses was so mad upon his return he took the image and burned it. Then he grounded it to powder, scattered it on the water and made the Israelites drink the water.

“This was Aaron’s big moment to stand up and lead,” said Johnson, the interfaith minister at Union Theological Seminary, “and Aaron quietly let this moment pass him by. He sided with the masses when he should have sided with the Mighty One … How many of us know an Aaron? Better yet, how many of us have been an Aaron, siding with the culture, what’s popular, what’s easy, when we knew God wanted more for us?”

While NEXT Church and others are “working to dismantle our own systems of oppression,” people of color “are being cut and wounded by the weight of your silence,” Johnson said.

“Constantly confronting white supremacy is exhausting,” he said. “I am here to tell you that after facing it day after day, your Black and brown friends, your Latinx, Asian and Native friends are tired. We need a break. We need courageous leadership that says, ‘All shall be free.’”

“What we see with Aaron and the Israelites is that the temptation to remain with the familiar is always among us,” Johnson said. We must always keep in mind that “God’s love and God’s law remind us that we have been liberated, that God will lead us to new territory. Too often we want to stay in the wilderness, polishing and protecting the golden calves of dominance, greed and control.”

God sent Moses down from the mountain because the people “were remaking themselves into something they were never meant to be — from God-focused to self-focused,” Johnson said. The corruption of their heart, mind and spirit would lead to their death, he said.

When Moses made them drink the water made putrid by the powdery remains of the golden calf, he “proved how worthless and puny this false god was,” Johnson said.

NEXT Church is held each year during Lent. “It is our festival for the Lord,” said Johnson, a member of the NEXT Church Strategy Team. “It’s a time to seek new ways of seeking God and being the church together.”

“If we aren’t ready to break down racist and oppressive systems, praying for the Holy Spirit to remake and remold us, why are we doing it at all?” There’s no good news for the poor, and no captives are being set free, he said, and “it postpones the year of the Lord’s favor. Come back later! Better luck next year!”

On the first day of the national gathering, “in this season of Lent in a deeply divided nation,” Johnson said, “I ask, what are the idols we have created?”

“In the name of the God who breaks us, rebuilds us and blesses us for God’s holy and liberating work, Amen.”