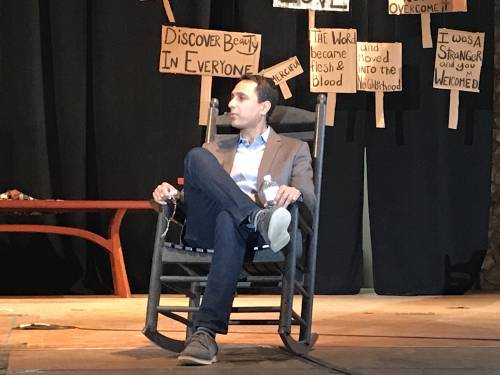 Author and speaker Eboo Patel answers questions following a talk at the 2019 College Conference at Montreat. (Photo by Mike Ferguson)

MONTREAT, N.C. — Eboo Patel, an interfaith leader in his own right, told the 1,000 or so Presbyterian students attending the 2019 College Conference at Montreat Thursday stories of how his friends, colleagues and mentors are using innovation and chutzpah to bridge religious divides and even save lives when government can’t.

December 2016 was bitterly cold in Vancouver, B.C., and city officials summoned faith leaders to see how they could prevent people living on the streets from freezing to death. “Our morgue is full,” the coroner said to open the conversation.

Patel’s friend Abubakar Khan, who was all of 23 years old, volunteered a place of worship for use as a shelter. He knew Sikhs and Jews would provide food and Christians could house people during the day in their churches and provide transportation.

“You probably never heard of him. He’s not a global hero. He’s a normal dude who loves his (Muslim) religion and showed up at a meeting during a time of city emergency and said, ‘We’re going to do something,’” Patel said of Khan.

A Patel mentor, Ruth Messinger, a Jewish feminist and Harvard graduate, took a job after college during the mid-1960s in western Oklahoma as a foster care officer. As she would push the stroller carrying her baby down the streets learning about churches in that part of the country, “she heard more than once the ‘Jews killed Jesus’ line, but she doesn’t leave” before explaining to church gatherings the urgent need to strengthen the local foster care system.

Her message fell on fertile soil.

“Pastors would read chapter and verse (from the Bible), telling the congregation that we are called by God to work with this woman,” Patel said. Half the members of one Southern Baptist congregation came forward to help. Messinger was certain that few of her progressive friends “would have volunteered like they did.”

“Part of being a leader is building partnerships with people with ideas you don’t like,” Patel told a rapt audience, most of whom are the ages that Messinger, Khan and the Rev. Martin Luther King Jr. were when they first hit their stride. The trick, he said, is that while disagreeing “on some fundamental things, you can still work together on other things. How can you have a diverse democracy unless you can do that?”

Then there’s Greg Damhorst, a friend of Patel for more than a decade. Damhorst grew up in a Presbyterian church in a Chicago suburb next door to his high school. Students arriving late to school would sometimes park in the church parking lot, but a group of church elders “decided that was not the thing to do if you weren’t a member of the church or weren’t interested in Jesus,” Patel said.

“You are inviting 16-year-olds to lie — about Jesus, of all things,” Damhorst later recounted to his friend. A Hindu friend of Damhorst decided he couldn’t lie — that Hindus view Jesus as an important figure but not the son of God. The disconnect for Damhorst was that this friend was the most Christlike person he knew.

Fast-forward to 2010, when a devastating earthquake hit Haiti. On the spot, Damhorst, a student at the University of Illinois, determined he would help organize the delivery of a million meals to Haiti. He and his fellow students did exactly that.

“Greg is no Nobel Prize winner — at least, not yet. He’s a Presbyterian kid who had a theological moment in high school,” Patel said. “Greg said if it wasn’t for that moment when he was 16, that doesn’t happen. When the world needed him, he was able to play big.”

The bottom line, Patel said during a question-and-answer session following his talk, is determining “who are you not going to work with?”

“I’m not buying a brownie from the KKK bake sale, but I’m working with anyone else,” said the Rhodes scholar and author of “Acts of Faith,” “Sacred Ground,” “Interfaith Leadership: A Primer” and “Out of Many Faiths: Religious Diversity and the American Promise.”

“Bridges don’t fall from the sky or rise from the ground,” he said. “People build them.”