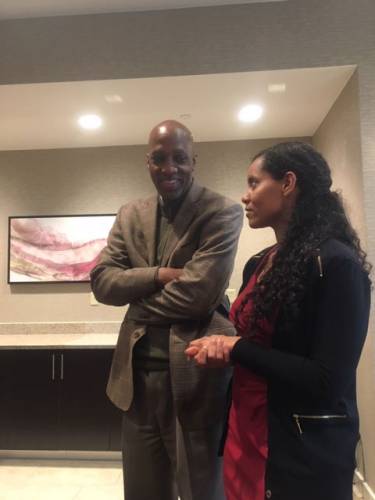 LOUISVILLE — After two days of in-person meetings over the Presidents Day weekend, the 2020 Vision Team now has a slightly revised Guiding Statement and an initial plan for sharing the vision with the wider church.

Along the way, team members heard messages of inspiration and challenge from the Rev. Cindy Kohlmann, co-moderator of the 223rd General Assembly, and the Rev. Dr. J. Herbert Nelson, II, Stated Clerk of the General Assembly.

Over the weekend, the team trimmed its original document by 15 words, working expressions of gratitude and joy into what it says God calls the Presbyterian Church (U.S.A.) to be: Prayerful, Courageous, United, Serving and Alive, matching the denomination’s acronym.

Team members spent time Sunday afternoon discussing how congregations, presbyteries and synods can study and use the statement between now and the 224th General Assembly, which meets June 20-27, 2020 in Baltimore.

Possible ideas for making the statement accessible to the broader church include a to-be-developed website, at www.pcusa2020.org; the use of social media and podcasts; a sermon series; a preaching festival or competition among seminaries; and the development of a hymn and discussion materials for Presbyterians of all ages, among other platforms.

Those strategies will be key, Nelson told the team Sunday. 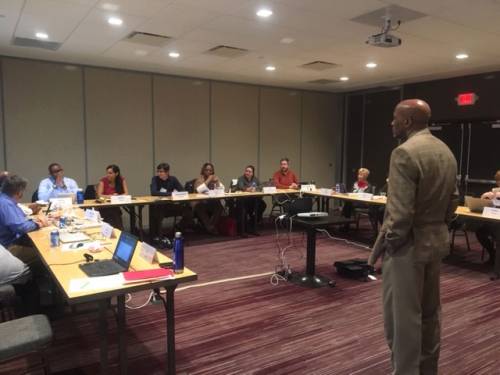 “How you set forth an expectation from now into the life of the church is probably more important than the guiding document,” Nelson said. That statement, he said, “is really for you. You wrote it. This is what you see. It’s how you see your work, and the General Assembly said yes (in 2018).”

“Take off the brakes,” he advised. “Your report is not going to be the report that totally changes the church,” but it can be “a jump start to how we begin to process of change across the church in significant ways.”

“Challenge the church,” he said. “It’s OK to say we need leaders who are adaptive.”

“Don’t lose heart,” Nelson said toward the end of his time with the team. “The Lord is in this — always remember that. There are people working with you that you don’t even know. Your (team’s) youth is exciting, but your adulthood is also exciting. Don’t diminish either one. I’m convinced the Lord will be grateful.”

On Saturday, Kohlmann met with the team via teleconference to help members study 1 Samuel 3, which is the story of Samuel’s calling, and Matthew 25, the parables of the 10 bridesmaids, the talents and the judgment of the nations. She opened by asking what about Samuel’s call got their attention.

Team members made connections between Samuel’s calling and their own work. The former is a story of hearing and discerning, said the Rev. Jerrod B. Lowry, a team member. His colleague, DèAnn Cunningham, said she appreciated Eli, the priest whose eyesight had grown dim, “being courageous enough to accept the truth as it was.”

Kohlmann pointed out that the chapter opens with this statement: The word of the Lord “was rare in those days” and “visions were not widespread.”

“Is that part of the framing for the creation of Vision 2020, the need to seek out and be open to the Lord in a new and deeper way?” she asked the team.

Matthew 25 presents this challenge for the church, she said: “We have to be honest about our failings and the places we have not been faithful in order to hear a call toward greater faithfulness.”

But the other message of this Matthew 25 vision for the church is that “God is acting in ways that surprise us. When we are faithful, we are surprised by God,” she said. “The one thing I encourage you in this uniquely Presbyterian way is to plan for God to surprise us.”

“We have a tendency to nail down everything to make sure everything is tight,” she said. “I want to push against that and be open to all the surprising things God is already doing.”

“If there is a way to build a space for the unexpected — for the Spirit to continue to blow — then I don’t think visions will be rare,” she said. “We will have the space to be surprised.”

The team’s co-moderator, Salvador Gavalda Corchado, called progress made over the weekend “an example of God’s faithfulness in the midst of our efforts. It continues to be an uplifting process.”

He said he and other team members “are grateful for the vision that God has placed on our hearts. Our desire is that we can live into the Vision 2020 in our communities and beyond, so that the church can engage in it and discern if it is the future that God has placed in their hearts.”

His fellow co-moderator, Sabrina Slater, said meeting face-to-face “has allowed us the time and space to pray, to discuss feedback and to live into the Guiding Statement as a tool for ongoing visioning work.”

Recurring themes for the team, she said, include “the emphasis from the Holy Spirit that we are hungry to hear yet again the Good News that God is still speaking, that God is still in control, and that as we are in this period of reforming as a church. We are invited to let go (of some things) so that our hands, hearts and minds are open and ready to receive the vision God has for us today and tomorrow until Christ comes again.”

Team members will continue to meet monthly via teleconference.