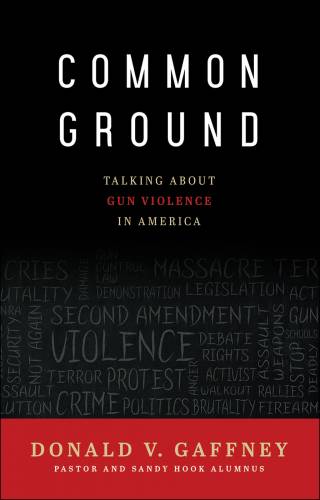 LOUISVILLE — We’ve become accustomed to the same cycle every time a shooting makes national headlines: the shock and horror, the offers of thoughts and prayers, the demands for legislative action, and the media uproar. As Christians, how do we meaningfully engage those with whom we disagree in the debate on gun violence?

As a Disciples of Christ minister and a Sandy Hook alumnus, Donald V. Gaffney seeks to guide readers, as moral, life-valuing people, in the difficult conversation on gun violence and inspire faithful action. His new book, “Common Ground: Talking about Gun Violence in America,”  released Monday from Westminster John Knox Press, is perfect for groups or individuals to reflect on and discuss guns and gun violence. Topics include the place of guns in our personal and national histories, America’s relationship to guns and redemptive violence, legislation and landmark court cases, and violence in Scripture.

“Gaffney invites readers to consider their own and America’s troubled relationship with gun violence and culture,” says the Rev. Dr. Laurie A. Kraus, director of Presbyterian Disaster Assistance. “His journey will resonate with many who wish to work for a common solution to gun violence across the broad and increasingly polarized reaches of U.S. society from a place of faith, grief, repentance, and hope.”

Donald V. Gaffney is a Disciples of Christ minister who was born and raised in Newtown, Conn., and attended Sandy Hook Elementary School as a child. Profoundly affected by the mass shooting at Sandy Hook on Dec. 14, 2012, Gaffney has immersed himself in the issues surrounding gun violence, especially as it is discussed in the church. He serves as an elder at Central Christian Church in Hermitage, Pa.