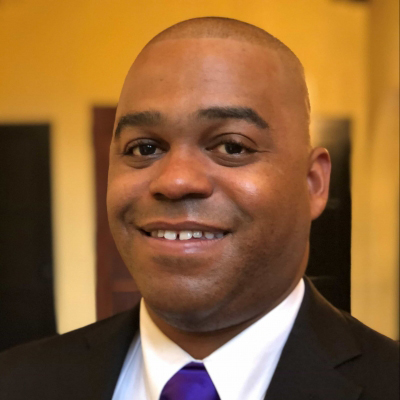 LOUISVILLE — When telling the church’s story, it helps to know one’s own faith story well enough to tell it succinctly and powerfully.

Hygh, who now teaches and coordinates the internship program in the communication studies department at California State University San Bernardino, was formerly the lead communicator with the United Methodist Church. Before that, he was learning faith stories from his family, including his great aunt on his mother’s side, with whom he lived for a few months when he moved to Southern California in 2002.

She cooked with old bacon grease and was an avid gardener. “I miss her fresh greens cooked to perfection,” Hygh said.

Faith was “the major impact on her life,” he said. She taught Sunday school and was president of the missionary society. Until she turned 102, she had a dozen or so people over once a week for a mid-week prayer service. Every morning at 6:30, her phone would ring, and she’d begin the day in fervent prayer with her faithful prayer partner. “They prayed for everyone in the community and around the world,” Hygh recalled.

After they prayed, she’d prepare a full breakfast for herself and her grand nephew — which they couldn’t eat until they’d first completed the Baptist Sunday school lesson for the day and she’d prayed again, asking God to “guide us, direct us, protect us and correct us.” Only then could they begin the meal together.

That’s the same prayer Hygh invokes for those who are telling the church’s stories, at local, reginal and national levels. “It’s my prayer we would ask God to do just that,” Hygh said. “If we want to be lifelong listeners, we must be lifelong learners.”

Churches’ faith stories can be told in the same way we tell our individual stories of faith. Both are precious. “When you know the story, handle it with care,” Hygh said, “so it can be shared with vigor and compassion for years to come.”

Hygh described his own church upbringing as “MethoBaptoCatho.” He attended a parochial elementary school in Marshall, Texas, run by an order of Black nuns out of New Orleans. His upbringing in the Black church helped inform views he holds today on issues including voting rights and a commitment to social justice, including just hiring practices.

“What’s your faith story?” Hygh asked periodically during his talk. “Being able to tell who you are shapes your faith, and vice-versa.”

Those who help people of faith tell their stories, especially in a post-pandemic world, will be creating meaning in emerging realities that are not yet clearly defined.

At CSU San Bernardino, Hygh’s students are matched with a nearby nonprofit agency. Students create a public relations campaign for the nonprofit using whatever technology they think is appropriate.

Hygh asks students, “How do you use the latest technology to tell the story of your nonprofit? The tools are ever-changing and new platforms are emerging.”

“How do you use those tools,” Hygh asked his audience, “to tell the story of your faith community?”

He suggested each person on the webinar identify a platform or app “that strikes your curiosity. Read an article or watch a YouTube video” explaining the technology, and then “tell a colleague what you did and ask them to hold you accountable. Willingness and accountability intersect to propel us to this unknow space.”

Hygh sees a “both/and” approach for churches as they begin to once again worship in person while providing an online experience to people who’ve joined their virtual worship services over the past 13 months.

At the church Hygh attends, “we know we will have to have some sort of virtual component for people who don’t want to drive across Los Angeles to go to church” on Sunday or who’d rather worship the Almighty as many have over the past year — in their pajamas.

“This is uncharted territory,” Hygh said. “Not everything will go smoothly. Keep trying new things to reach new people.”