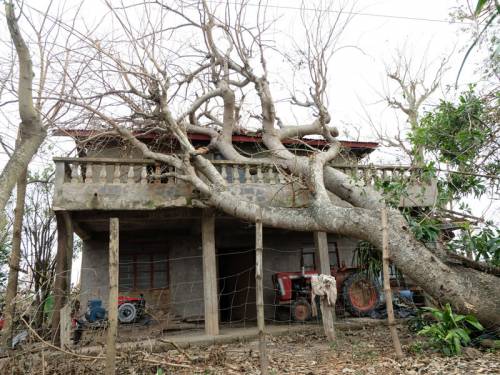 LOUISVILLE – While Hurricane Florence dominated media coverage in the U.S., the most intense storm of the year battered the Philippines, Guam, the Marshall Islands, China and Hong Kong, causing extensive damage, loss of life, landslides and severe flooding to residents. Super Typhoon Mangkhut battered the northern Philippines with wind speeds up to 175 miles per hour, more powerful than a Category 5 hurricane. Presbyterian Disaster Assistance (PDA) is working with its area partners, the United Church of Christ in the Philippines (UCCP) and ACT Alliance, to assess the damage and deliver timely response actions.

Mangkhut, known as “Ompong” in the Philippines, struck the Philippines last Saturday, making a direct hit in the northern province of Luzon, which includes the Cagayan Valley, IIocos and Cordillera regions. More than 15,000 people were evacuated, and reports listed 88 deaths, including 40 gold miners who perished when a landslide struck the mining village of Itogon. More than 50 people are still listed as missing, which may bring the death toll to more than 100.

Several houses, farms, buildings and government infrastructure, including power lines and communications towers, were destroyed. An adviser to Philippine President Rodrigo Duterte estimated that only 20 percent of farmers’ produce was harvested in advance of the super typhoon, threatening crop staples like rice and corn.

According to the Rev. Dr. Laurie Kraus, PDA director, PDA will be working with UCCP and has provided an immediate solidarity grant of $10,000. UCCP has initiated an emergency appeal for supplies, cash relief, food and seeds so farmers can immediately replant crops destroyed in the storm. 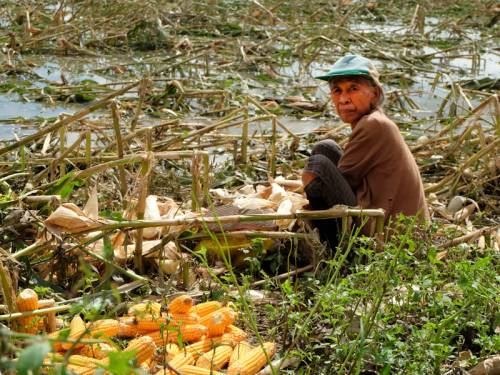 Farmers’ crops were destroyed by the latest super storm to lash the Philippines. ACT/AC Dimatatac/ICSC

“It’s upsetting the Philippines is struck so often by large scale catastrophes,” said Kraus. “We’re grateful we have partners in both the National Council of Churches in the Philippines (NCCP) and UCCP who have such a deep commitment to humanitarian support and excellence in motivating their volunteers and enabling the global church and the global humanitarian community to stand with them as they begin the recovery process.”

“Our partners are really good at assessment and make it easier for us to participate quickly and efficiently on scene,” continued Kraus. “We’ll be working with the NCCP, UCCP and the rest of the partners in the ACT Alliance to move into short- and long-term recovery work.”

Tropical force winds extended more than 500 miles across Mangkhut. For comparison, Hurricane Florence’s winds extended approximately 350 miles. After leaving the Philippines, Mangkhut moved onto Hong Kong and China. Hong Kong suffered severe damage, particularly to building structures, but no deaths have been reported in that area to date.

More than 3 million people were evacuated across China in preparation of the super typhoon. Kraus noted that there were no accurate assessments of damage in China to date, but PDA will be working through ACT Alliance member The Amity Foundation to deliver a timely response.

To support recovery efforts in the wake of Super Typhoon Mangkhut and Hurricane Florence, click here.  You’ll be taken to the PC(USA) website to donate securely and quickly.

Presbyterian Disaster Assistance is the emergency response and refugee program of the denomination, committed to the long-term journey of recovery of communities adversely affected by a crisis or catastrophic event. It is funded by One Great Hour of Sharing and has designated funds for responding to specific disasters.