Generosity and planned giving go hand in hand in many cultures 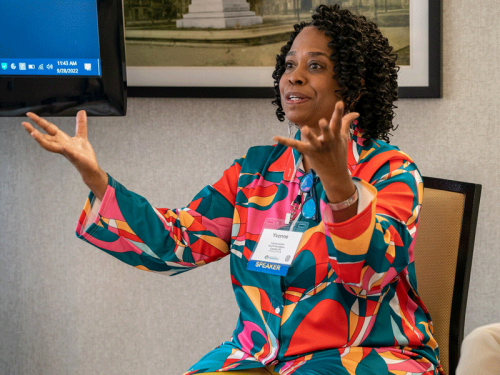 Yvonne Lembo of the Episcopal Church Foundation was among the panelists who spoke during the “Faithful Giving” discussion at Stewardship Kaleidoscope. (Photo by Gregg Brekke)

Every faith has traditions of generosity, says James W. Murphy, and those traditions can serve as a framework for impactful fundraising.

Murphy is Managing Program Director at the Episcopal Church Foundation and author of “Faithful Giving: The Heart of Planned Gifts.” He led a panel discussion with several contributors to “Faithful Giving” at Stewardship Kaleidoscope, an annual generosity and church stewardship conference, held this year in Savannah, Georgia, Sept. 26- 28.

Murphy was joined by Stacy B. Sulman, Chief Legal Officer and Managing Director for Planned Giving at the American Committee for the Weizmann Institute of Science; M. Yaqub Mirza, President/CEO of Sterling Management Group and chair of the board of trustees of the Amana Mutual Funds; Yvonne Lembo, Director of Development at the Episcopal Church Foundation; and Karl Mattison, Vice President of Planned Giving Resources for the Presbyterian Foundation.

Murphy stated that a purpose of the book and a goal of the conference panel was to “increase understanding that every faith has traditions of generosity” which can serve as a framework for impactful fundraising—inclusive of legacy and estate giving, which can in turn be the largest, last, and most transformative gift a church member or supporter can make.

Zooming in from New Jersey, Sulman emphasized the importance of encouraging legacy donors to keep their gifts flexible, with room for adaptability and discretionary usage. “Give the future the opportunity to do something amazing,” Sulman said.

Mirza, a Muslim lay person, expressed how responsibilities and opportunities to give are inherent in Islam, which teaches that specific categories of people are entitled to receive charity, as well as the importance of pooled giving and recognition of charity as expressions of commitments to one’s faith, family and community.

Lembo suggested framing discussions of legacy giving with potential donors around opportunities to reflect the values and focus of the donor in impactful ways, as a testament to who the donor was in life and in a way that transcends that life. She also stated the conjoined importance of memorial giving (“in lieu of flowers”) for its own merits and also as an entry point to conversations about legacy giving with other donors.

Offering the most pragmatic advice of the hour, Mattison stated the importance of gift policies and proactive conversations with memberships about the vital importance of legacy and estate giving, efforts that build trust and cultivate philanthropic leaders among congregations. Echoing others on the panel, Mattison also described values-focused legacy giving as a teaching or messaging opportunity for donors, a legacy in multiple senses.

All members of the panel also noted that the potential magnitude of a legacy gift was an ideal opportunity to model philanthropy and to inspire additional gifts among congregational members. In particular, regular educational sessions about the opportunities, policies, and logistics of planned giving were emphasized. Several panelists also espoused the virtues of legacy societies to recognize and celebrate members who have opted to give their support in this way and to inspire philanthropy among others as well.

As Mattison said during his remarks, only about 5% of estates have charitable gifts. In the absence of overt and consistent education, familiarity, and trust about the viability of legacy and estate giving, members may not otherwise have opportunities to consider including charitable giving as part of their end-of-life planning. Murphy seconded this with a time-tested fundraising adage: “if you don’t ask, you don’t get.”

Throughout the discussion, all five panelists emphasized the importance of having conversations about legacy giving specifically and philanthropy in general as opportunities for relationship-building between faith leaders and their congregants.

From the foundation of a trusted relationship, both parties can more openly discuss the financial needs of the organization, the philanthropic means of the potential legacy donor, and the question of what happens—or what would one like to happen—when a supporter is no longer living and able to actively continue an established pattern of giving.

The panelists also reiterated how such open and overt conversations about planned giving were inherently also opportunities to recognize and celebrate those who have been actively giving while living as well.

“Faithful Giving: The Heart of Planned Gifts” is published by Church Publishing Inc. and is available in both paperback and ebook formats through booksellers and libraries beginning in mid-October. Nearly 25 experts contributed case studies and guidance to the book.

Jonathan Haupt is the executive director of the nonprofit Pat Conroy Literary Center in Beaufort, South Carolina, the former director of the University of South Carolina Press, and coeditor of “Our Prince of Scribes: Writers Remember Pat Conroy,” winner of 17 book awards. Send comments on this article to robyn.sekula@presbyterianfoundation.org.