…be led forth in peace. (Isaiah 55:12). Support to the Peace & Global Witness Offering.
Make A Donation Click Here >
Home › Stated Clerk tells Big Tent the church is primed for another Reformation 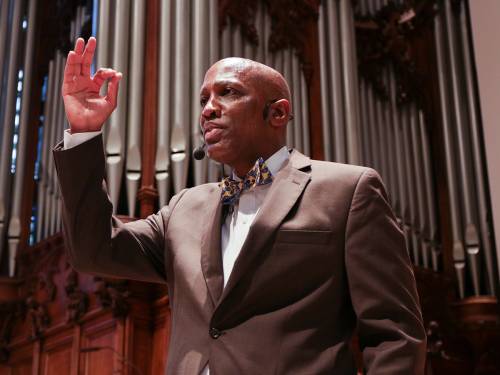 “We saw the streets and clubs jammed with people on Saturday night, but on Sunday morning the churches were empty,” Nelson told the opening Big Tent worship service here July 6. “I asked our hosts, ‘What is happening here? Why are these churches not filled? Why are they struggling to keep their doors open?’” One pastor replied, “We need another Reformation.”

Stately and sweltering Graham Chapel on the campus of Washington University was packed for the service on the opening evening of the 2017 Big Tent. The theme of the July 6–8 gathering is “Race, Reconciliation and Reformation.”

The challenges to a new Reformation in the PC(USA) are enormous, Nelson admitted in a sermon he entitled “When Our Backs Are Against the Wall.” He said the church “needs to engage in denominational group therapy to overcome the depression that we are facing after 34 years of a denomination marriage [1983’s Presbyterian reunion] and divorce [a spate of dismissals to other denominations] that has left us pining over what could have been, should have been, would have been.”

The blame game shifts around, Nelson said — from local churches to mid councils to the national denominational agencies to “the evasions of other denominations that have used stealing our congregations as means of growing their own evangelism programs while their leaders deny any knowledge of these tactics taking place.”

Meanwhile, he continued, “We see so much change that we hang on to the old ways so that we can have a church that we know.” That status quo is not sustainable, Nelson insisted. 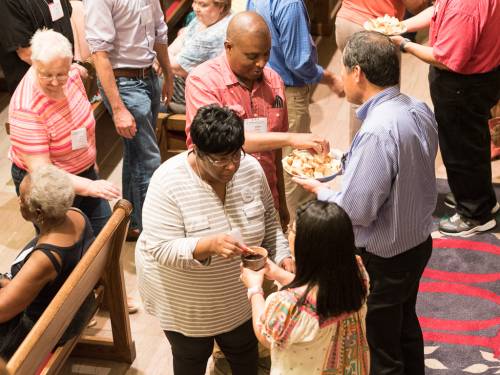 For instance, he said, “It is numerically impossible for our church to live into the 21st century as long as we’re 93 percent white — it’s just not going to happen.” To minister to our increasingly multicultural communities, Nelson continued, “we have to be in the community. It’s not anybody else’s fault that we’re not going there.”

The PC(USA) has been battered for many years, from within and without, due to its struggles over such issues as the Israel-Palestine conflict and the full inclusion of LGBTQ people in the church, Nelson said. “Call it whatever you want but in the house of the Lord we are all the children of God!” The PC(USA) has struggled mightily, he said, “but ‘through many a danger, toil and snare we have already come.’”

The bottom line for the church today, Nelson said, “If we are not bearing a cross then we don’t really have a faith! If there’s no struggle to engage in, no challenge to face, then our faith is empty. It is through the battles we engage that we find our faith. To go beyond the expectations of others is to stand with God!”

Preaching from Joshua 24:14–18, Nelson said the challenge to the PC(USA), as Joshua told it to his people, “is to name their purpose and the captain of their soul.” Our task as Presbyterians, he said, “is not to save the church but to serve the Lord.”

Challenging the congregation, Nelson asked, “Who have you told about Jesus Christ lately? Our faith ought not to be personal but used to help others along the way. We must remind everyone that every day we have, every joy, every pain, every sorrow, every struggle belongs to the Lord.”

Nelson ticked off the PC(USA)’s blessings. “We’ve still got 1 million members. God is still blessing us with congregations, campus ministries, mission inside and outside the denomination, new church developments and new worshipping communities, military chaplains, rural ministries and a host of other people, institutional and financial resources to shake the world,” he said

“We serve the kingdom of God, not the church,” Nelson concluded. “We must become kingdom people — to put our eyes on the kingdom and take them off of the church. I hear in Joshua’s prophecy the message: Stop belly-aching about what we don’t have and start praising God for what has been given to us.”