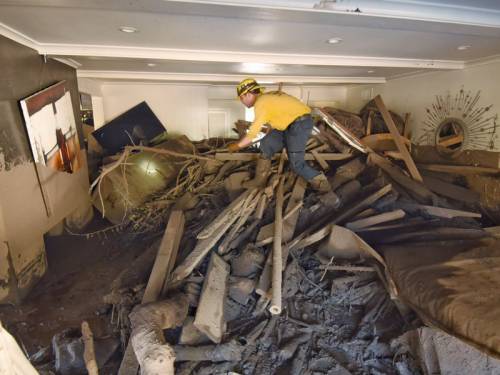 A rescue worker climbs through the rubble in one house heavily damaged by the mudslides. Photo by Mike Eliason.

LOUISVILLE – Residents of Montecito, Ventura and Santa Barbara are still reeling from the recent mudslides that have left residents dead, injured and homeless in California. Sticky sludge and mud can be seen up to the rooftops in homes along the pathway of destruction in Santa Barbara. Witnesses say the rocks, trees, boulders and houses came plowing through the communities in a matter of seconds.

“There’s just a spirit of disbelief and it’s a small community. Everyone knows somebody who has been affected,” said Erik Wiebe, associate pastor of First Presbyterian Church in Santa Barbara. “We are a pretty vulnerable community with only two roads in and out, and one is closed. It was the part of the freeway destroyed by flooding.”

Wiebe says the community of 100,000 is trying to hold it together.

“In the last week to nine days before the mudslides, people had just gotten back into their homes. They had just hung their pictures back on the walls when the call for evacuations started to happen,” Wiebe said. “A lot of people were hesitant to get out of their homes because of evacuation fatigue and people were just tired of it. Not as many got out as they should have. There’s just a weight over everyone now, and those inconvenienced are trying to hold it together.”

Sandy Thoits, moderator with the Presbytery of Santa Barbara, says El Montecito Presbyterian Church, located near the center of Montecito, has experienced the most impact.

“The church is within the evacuated area and is now unreachable to the public, as the search and recovery responders and teams continue their work,” she said. “The church buildings and property are unharmed. One church member died in the flooding mudflows and his son was injured. Their home was severely damaged.”

Thoits says the storm/mudslides disaster has impacted the community and people on a much wider scale than the recent wildfire. 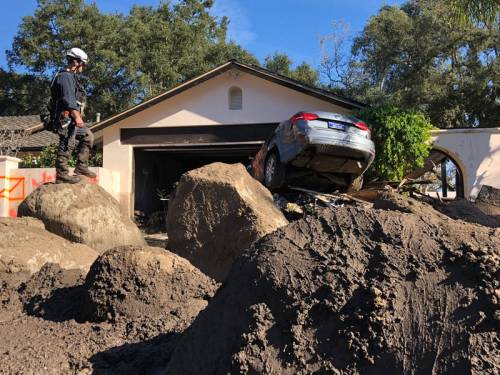 “As many as 20 people have died, several more remain missing. Over 60 homes were destroyed and several hundred homes damaged,” Thoits said. “Many people will remain evacuated for the foreseeable future. Utilities such as gas, electricity, water are unavailable in much of Montecito and the surrounding area.”

County, law enforcement and public health officials, in coordination and cooperation with the Red Cross, have been using First Presbyterian Church for reunification and notification services.

“People have been coming to the church who are missing loved ones, and officials there have the lists of deceased and missing persons,” Wiebe said. “They also have counselors and public health officials on hand. There is a lot of sadness in our doors.”

In the days since the mudslide, local clergy say they’ve been cut off from their counterparts to the south. Amtrak service was restored late last week, but the trains have been crowded with people traveling in and out of the damaged region.

In December, the community created a Disaster Response Task Force in response to the Thomas Fire, which first had major impacts on the southern part of the Presbytery in Ventura, Santa Paula and Ojai. As the Thomas Fire spread north into Santa Barbara County (becoming the largest wildfire in modern California history), thousands of firefighters came to protect property and homes in Montecito and Santa Barbara.

“These efforts resulted in minimal loss of property,” Thoits said. “Yet, the fire left large scale areas stripped of vegetation on the mountains above Montecito and Carpinteria, and prone to flooding and landslides with rainstorms.”

Presbyterian Disaster Assistance reached out to the presbytery last week to offer assistance, including a $7,500 initial disaster response grant. PDA is also sending a National Response Team to the region to meet with church and presbytery leaders and assess the damage and long-term support needs.

“As I spoke with Presbyterian leadership in Santa Barbara Presbytery, I heard an all too common lament. ‘The wildfires were only the beginning and set the stage for an even more devastating disaster,’” said Jim Kirk, PDA’s associate for national disaster response. “With the fire, the first responders had the opportunity to prepare. Not so with the flash floods and mudslides, which caught entire communities by surprise, leading to a tragic loss of life. Our thoughts and prayers are with all those impacted by and responding to this disaster. If needed, PDA will respond to address the emotional and spiritual needs and partner with the Presbytery in the long-term recovery.”

“Everyone is exhausted, but they’re holding up, grieving and helping to resource the community,” she said. “We will continue to partner with County Behavioral Health and VOAD partners to provide community care.”

Wiebe and other church leaders in the community continue to ask for prayers across the denomination.

“For us as Presbyterians, it means the world that there are resources like PDA available to us. We know and believe in the work of PDA because we have personally received the support in disaster situations,” Wiebe said. “It means the world that we are a part of the connectional body and support each other in times like this. We do more together than we could as individual churches.”

Presbyterian Disaster Assistance is the emergency response and refugee program of the denomination, committed to long-term recovery of communities adversely affected by a crisis or catastrophic event. It is funded by the One Great Hour of Sharing and raises designated funds for responding to specific disasters.

To support PDA’s response to the mudslides, click here. You’ll be taken to the PC(USA) website to donate securely and quickly.