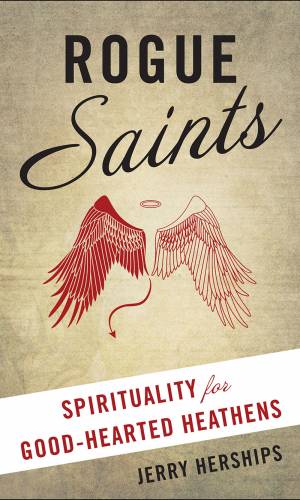 LOUISVILLE — There are many of us who don’t necessarily have much use for church anymore, but who love people and who want to do good in the world. Organized religion just doesn’t appeal to us. But that doesn’t mean we can’t serve God or that God doesn’t love us.

While running the church-ish group AfterHours Denver to serve that city’s homeless community, the Rev. Jerry Herships has found many ways that we can love and serve God outside of the church. He compiles his advice in the inspiring new book, “Rogue Saints: Spirituality for Good-Hearted Heathens.”

As Herships helps absolve former churchgoers of their guilt, he doles out down-to-earth wisdom and anecdotes, using examples from his community of “heathens” to show God at work in unconventional people: burlesque dancers, bikers, AA members, the homeless, and the tattooed. With an emphasis on the compassion and mercy of service, Herships encourages readers to seek God in the unexpected, to be humble — and to really consider what God does and doesn’t care about.

For those who feel called spiritually, but feel like an outsider to organized religion, “Rogue Saints” is the perfect inspiration to courageously and compassionately seek God in alternative ways.

“If you are holding on to faith with a fingernail — or if you lost it already and don’t miss a lot of it but do miss something — then this book is for you,” writes Brian D. McLaren, author of “The Great Spiritual Migration.” “If you think the best response to the harm done by bad religion is to live well, then you’ll enjoy it as well. Don’t miss ‘Rogue Saints!’”

Jerry Herships is the founding pastor of AfterHours Denver, a faith community of rebels and misfits that meets in dives and pubs to talk God while making PB&Js to pass out to the hungry and homeless of downtown Denver. He is the author of “Last Call: From Serving Drinks to Serving Jesus.”