…be led forth in peace. (Isaiah 55:12). Support to the Peace & Global Witness Offering.
Make A Donation Click Here >
Home › Retooling the church for the 21st century 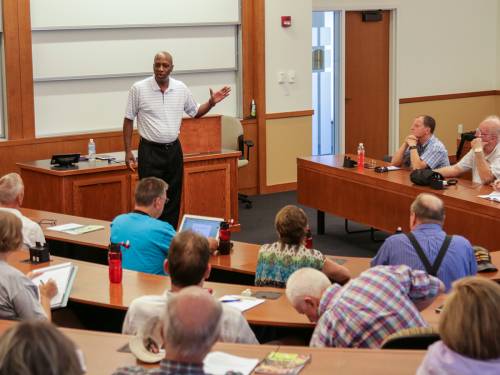 Reflecting on his experience at the World Communion of Reformed Churches’ General Council — which included a commemoration of the 500th anniversary of the Reformation — Nelson said in a free-flowing exchange, “The debates and internal struggles that took place over what the Reformation would actually look like were long and contentious.”

And so it is for the Presbyterian Church (U.S.A.), which Nelson said is engaged in a modern-day Reformation. “What does it mean to give something up, to become a new creation, something vibrant but different?” he asked. Looking back to Presbyterian Reunion in 1983, Nelson said, “The world was changing and many of us thought reunion was enough. It wasn’t. … The world didn’t stop and wait for us to catch up and we’re still struggling to catch up.”

One sign of the enormity of the task of what Nelson called “re-tooling the church to become the church of the 21st century” was the 2016 General Assembly’s creation of not one but three separate bodies to examine what the church needs to do in the near future. One of those bodies is the aptly named Way Forward Commission.

“The General Assembly appointed three separate groups to work on that and refused to combine them into one,” Nelson said. “That tells me we’re in pretty bad shape — a major, major quagmire of transition.”

All three groups — the Way Forward Commission, the All-Agency Review Committee and the 2020 Vision Team — “are asking: ‘What did the Assembly ask us to do?’” Nelson noted. “I have one word: change … and how do we approach it?”

The PC(USA) has been “under so many false categories since Reunion” (North/South, liberal/conservative, Bible-believing/relativist), Nelson said, “that a mess has been created that convoluted a lot. We don’t have a clear identity.”

And so, the church has let others define it. “What do others say about us?” Nelson asked. A spate of responses came back from workshop participants: “deliberative,” “well-organized,” “liberal,” “rich,” “white,” “I don’t know.”

Chuckling, Nelson responded, “Our own people say the same things about us. We have snapshots of who we are but no real centering point around who we are and what we do, inside and outside the church.”

Steve Musick of Maryville, Tennessee, responded, “We have all these wonderful documents (the Book of Order and Book of Confessions) and policy statements and we never use them. Why don’t we let our light shine?”

Carlton Stock of St. Louis added, “We have general images from our past but we don’t seem to have anything very specific. What does a faith community look like today?”

Nelson responded, “You’re looking at it — it’s not a bad picture but we have to make sense of what we’re seeing.”

There’s no perfect church out there, Nelson said. “There’s no perfect system, no perfect theology, but we have a participatory system that’s progressive enough to be willing to grapple with all these changes,” he said. “I tend to look at the benefits, not what’s wrong, with the church.”

Jeff Boyd, a PC(USA) missionary in Africa, said that in Cameroon, for instance, “identity is very strong — new members [are] thoroughly trained. But he said that his perception is that the PC(USA) doesn’t have a deep commitment to teaching people what it means to be Presbyterian.”

Asked for his vision of the 21st century PC(USA), Nelson quickly ticked off four elements: