Conference preacher: Anxious, enslaved people are set free after saying ‘no’ to Pharaoh 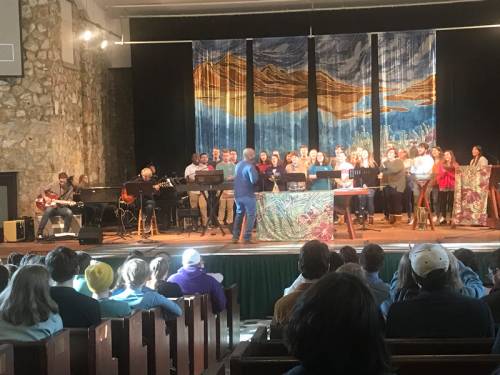 A choir under the direction of Daniel Heath sings during worship Saturday at the College Conference at Montreat. (Photo by Mike Ferguson)

MONTREAT, North Carolina — Anxiety may be rampant in modern culture, but it’s not unprecedented.

Take, for example, the enslaved people of Israel described in the Book of Exodus. During Saturday’s worship, the Rev. MaryAnn McKibben Dana, preacher during the College Conference at Montreat, said Pharaoh had “bound the people of Israel to him in crippling and endless slavery.” When Moses and Aaron ask Pharaoh for three days off so the people can celebrate a festival for God in the wilderness, Pharaoh figures that “the cure for laziness is more work. Let them gather their own straw,” she said.

“There is no place for God,” McKibben Dana said, “in an empire fueled by anxiety.”

By all means, read the end of the story, the preacher urged the 900 or so Presbyterian collegians worshiping on Saturday.

“It doesn’t end there. It ends with God bringing the people out and giving them a particular gift — the gift of Sabbath, a day every week to rest as slaves no longer. It’s a day to proclaim to the world, ‘We are not slaves to the empire anymore. We don’t have to work day after day. We are free!’”

“Sabbath,” she said during the conference called “Remembering Sabbath,” “is our liberation and it’s about resistance against the empire.”

Suzanne Collins spoke to the same kind of resistance in her book “The Hunger Games,” which formed the basis for a movie of the same name starring Jennifer Lawrence as Katniss Everdeen.

McKibben Dana played a brief clip following the killing of Katniss’ friend, Rue. In the film, it’s clear something within Katniss breaks with the death of her friend. Even though she’s being hunted by her fellow competitors, Katniss risks her life to gather flowers to honor her friend.

“It’s a Sabbath moment, a quiet, defined, reverent act,” McKibben Dana said. “It’s a risk for her, but she takes the time even though they are coming for her. She can’t help herself. Katniss’ broken heart opens up a revolution within the district.”

Then she paused a beat.

“What would change in the world if we all said, ‘No,’” the preacher said. “When we take this stuff seriously, we realize we don’t want to make Pharaoh’s bricks anymore … Pharaoh’s empire cannot stand. It is rotten to the core, and it’ll go crashing into the sea. Good riddance.”

“Our God,” she said, “is about nothing less than the complete transformation of our lives and the world, about setting the captives free.”

“The message of Sabbath-gifting is this: We should not be content with captivity. God has something more for us than endless and joyless brick-laying. Thanks be to God!”