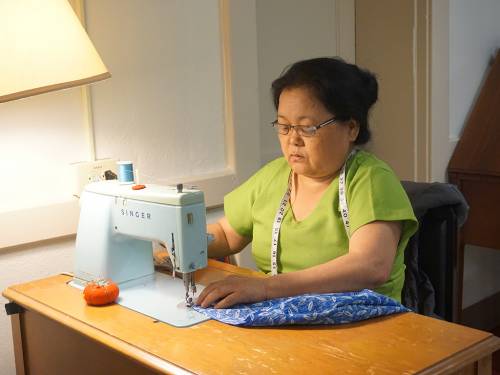 Bhuwani Rai takes part in STITCH (Sewing Together in the Caring Highlands), a ministry of the Highland Presbyterian Church, Louisville, Kentucky. (Photo by Emily Enders Odom)

LOUISVILLE – Peals of laughter and lively chatter mingled with the whirring and humming of busy sewing machines in the small, makeshift classroom that STITCH volunteers and students now call their temporary home.

STITCH — an acronym for Sewing Together in the Caring Highlands — is a mission of Highland Presbyterian Church in partnership with the Louisville-based Kentucky Refugee Ministries. The six-year-old ministry provides sewing lessons for refugee women while offering them opportunities to learn and practice their English skills at the same time.

“The mission is to teach them to sew, to teach them independence, and to be able to provide something for their family, whether it’s clothes or curtains or bedspreads or actual money from selling the items that they’ve made,” says Anna Gray Slagle, STITCH’s co-director and a member of Second Presbyterian Church, Louisville. “While our primary purpose is to teach them to sew, we are also a support group and a caring environment where they can practice English conversation.”

Slagle, who has been with STITCH from its beginnings in the Highland Church, reached out in the ministry’s first year to her current co-director Janet Raderer at a time when church member and program founder, J. C. Compton, faced health challenges and moved out of the area.

Raderer — who taught at Baer Fabrics, a Louisville institution which closed its doors in 2008 after operating for 103 years — was, in a word, ‘tailor made’ for STITCH.

“We complement each other,” says Raderer. “Anna Gray is our organizer — she does the business end, the volunteers, and the scheduling. I do more of the sewing and keep the machines running.” 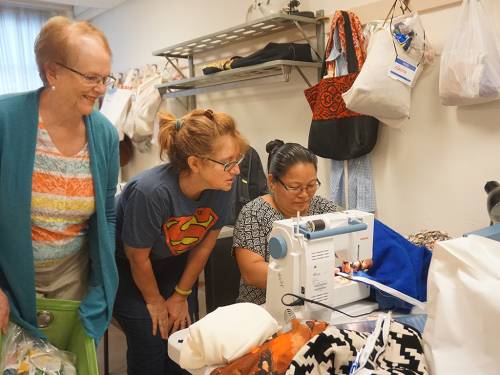 From left to right: Anna Gray Slagle, co-director of STITCH (Sewing Together in the Caring Highlands), a ministry of Highland Presbyterian Church, Louisville; Anne Scott, a volunteer; and Shanta Rai, a student. (Photo by Emily Enders Odom)

Recently the church-based program has become so popular that it outgrew its space in the church’s Pleune-Mobley Center, necessitating a move to temporary quarters across the street while extensive renovations are under way.

“They are renovating the south end of the building, all three floors,” Slagle says. “Eventually when it is done, we will have the whole third floor, which will be designed specifically for our needs. The church is funding all of this by way of a capital campaign.”

“The church has been very supportive,” adds Raderer.

As has the Presbyterian Mission Agency.

On Friday, April 21, nine employees of the mission agency volunteered to do some of the heavy lifting as part of Louisville Mayor Greg Fischer’s annual Give-A-Day Week of Service, April 15-23.

One of the volunteer movers was Joe Edmiston, a ruling elder at Central Presbyterian Church in Louisville and payroll manager for the Presbyterian Mission Agency. Edmiston was already a veteran STITCH volunteer long before the program’s moving day.

“I’m just such a fan of the STITCH program,” says Edmiston. “Caring for the stranger is integral to our Christian faith, and since one of my hobbies is tinkering with old sewing machines, I really enjoy the small part I have in STITCH’s ministry.”

STITCH relies heavily on donations — everything from thread to fabric to notions to monetary gifts. In addition to receiving support from the Highland Church, the program has received a donation every year from the Mission Committee of Second Presbyterian Church in Louisville.

The ministry also depends on the expertise of volunteers like Edmiston in order to cut down on the non-profit’s expenses. Without Edmiston, STITCH would have to pay for the machines to be repaired and serviced.

Without the help of such willing volunteers, “we would have been beside ourselves,” Slagle says. 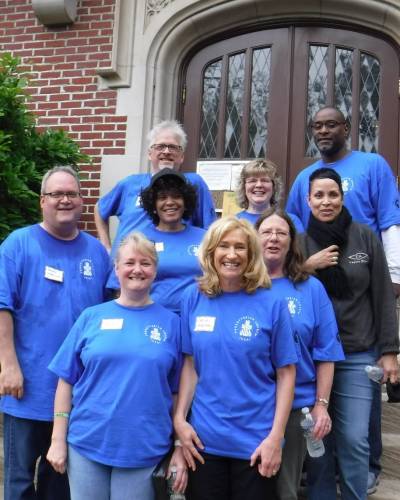 “It’s just such a pleasure for me to be involved with this group,” says Edmiston of his Give-A- Day partners. “What can I say about my wonderful colleagues? I’ve always known they were good people, so I wasn’t surprised that so many volunteered to help. It really was a lot of fun spending the morning with my friends from work and my friends from STITCH, and the pizza afterwards was the perfect end to the day.”

And the Presbyterian Mission Agency may again have an opportunity to step up in future to assist the growing STITCH program, not only to help them move back to their renovated space when the time comes, but also as a prospective site for its “sewing to sell” initiative if possible.

“We would love to do a fair at the Presbyterian Center,” Slagle says.

Raderer says that their intent at the beginning was never to sell things. “It had never come up,” she says, “until about four years ago, when a woman approached Anna Gray with something that she had made and asked her, ‘Can I sell this?’”

Currently STITCH sells its goods at churches around the worship hour before church, after church, or in the time between Sunday school and Sunday worship.

Whenever a woman makes an item that is to be sold at an art or church fair, it is tagged with her name on the bottom half.

“When we sell an item, we cut off the bottom half of tag as it’s sold,” explains Raderer. “That’s how we ensure that the woman who made it will receive the cost of that item when we divvy up the money afterwards. We’re not a co-op.”

When STITCH ultimately moves to its newly expanded, renovated space, Slagle says the ministry will add a third day to its current two-day-a-week teaching cycle that will be dedicated solely to “sewing to sell.”

She tears up as she speaks about the women — her family — that the program benefits.

“The most traumatic story I tell is of a woman from Congo,” says Slagle. “I noticed one time when she came in that she was wearing men’s clothes. One day when I was coming to class with some T-shirts and yoga pants that I was planning to donate to Goodwill, I just — on a whim — took out that bag, and thought to myself she could wear these. At the end of class, I took her to the side and asked, ‘Would you like these,’ and she looked at the clothes and her eyes got huge and she just grabbed me and practically squeezed the life out of me. Then she started crying and said that her husband and five ‘babies’ were all shot and killed in front of her. Since she was also beaten and shot, she takes part in the University of Louisville’s Survivors of Torture Recovery Center. She calls me ‘mama.’”

For Slagle, Raderer, the members of Highland Presbyterian Church, and the program’s many students and volunteers, STITCH is more than a program — it’s a community of friends.

“I love every single person that I’ve met here,” says STITCH volunteer, Anne Scott, a veteran ESL teacher who is now a local crafter. “I’m encouraged by the students’ bravery, and I’m completely in awe of the volunteers here, who are amazing. All they want to do is make a better life for these women.”

In 2016, STITCH was featured on the PBS program, “Sewing with Nancy,” which resulted in donations and cash gifts from all over the country.