Make A Donation Click Here >
Home › Reflections on the celebration of the life of Dr. Katie Geneva Cannon

We honor the life of a sister, aunt, friend and educator 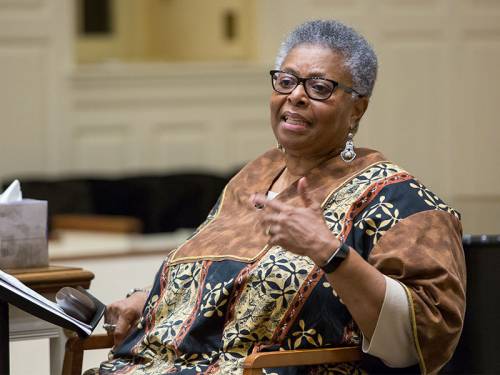 CONCORD, N.C. – There was something that felt perfectly right about the celebration of life of Dr. Katie Geneva Cannon at Bethpage United Presbyterian Church on Aug. 14 in Concord, North Carolina. First, there was the community that gathered. It was like a reunion of reunions for African-American Presbyterians and many others. We gathered, greeted each other, sang, praised God, read Scripture, remembered, celebrated and renewed our faith, even at a time of death of a beloved sister, aunt, friend and educator.

Dr. Diane Moffett, executive director and president of the Presbyterian Mission Agency, announced that a fund at the Presbyterian Mission Agency will provide scholarships for women of color to attend leadership development events. She asked for donations in honor of Katie Geneva Cannon, so that her name and legacy will continue. Those wishing to donate towards the fund should click here to donate online or include #E049991 on your check to designate the donation.

Though filled with faith and hope for the resurrection to eternal life, it was difficult for the Cannon family to imagine a world without Katie Cannon in it. Dr. Cannon’s sister, Sara Elizabeth Cannon-Fleming, named the many sisters, brothers, nieces, nephews and cousins, as they have a large family. She said, “You have spoken of the Rev. Dr. Katie Geneva Cannon, but to me, she was my sister Katie.”

Education was a high priority for the Cannons. Cannon-Fleming shared about a relative many years ago who almost lost her finger, simply because she could write. Another high value was being kind to others and being respectful of other people.

Despite Dr. Cannon’s academic achievements and educational ministry in the U.S. and around the world, those present were reminded, through many reflections of her life, that “Katie remained true to herself.”

Poet Alice Walker sent a remembrance, which was read by Dr. Suzan Johnson Cook. Walker wrote, “We were on the same ship. We landed at the same time.” Walker joined Cannon in Richmond earlier this year at the inauguration of the Center for Womanist Leadership at Union Presbyterian Seminary, an embodiment of Cannon’s lifelong work and ministry, unapologetically making visible the bodies, souls and minds of women of color.

Her legacy continues through her family, books and articles, sermons, and through the many students, clergy and church leaders whose lives Dr. Cannon touched.

Rhashell Hunter is the director of Racial Equity & Women’s Intercultural Ministries at the Presbyterian Mission Agency.