The Rev. Dr. Jim Reese, one of the PC(USA)’s foremost educators, shares some of what he’s learned during seven decades of ministry 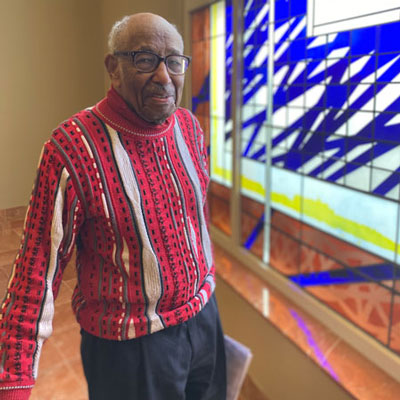 The Rev. Dr. Jim Reese, 97, appeared along with the Rev. Dr. Lee Hinson-Hasty on a Facebook Live discussion last week on the importance of Christian education. (Photo by Robyn Davis Sekula)

LOUISVILLE — At age 97 and with 71 years of ministry under his belt, the Rev. Dr. Jim Reese had a story or two to tell the Rev. Dr. Lee Hinson-Hasty during a Facebook Live event hosted last week by the Presbyterian Foundation and Pittsburgh Theological Seminary, Reese’s seminary alma mater (Class of 1949).

Hinson-Hasty, senior director for Theological Funds Development for the Committee on Theological Education, noted that Reese was on the National Mall on Aug. 28, 1963 when the Rev. Dr. Martin Luther King, Jr. delivered his “I Have a Dream” speech. “That seems like a metaphor for your life and your ministry,” Hinson-Hasty told Reese. “You have helped bring about dreams that are theologically grounded.”

Reese said one of the ministry secrets he’s discovered is finding “something in my life that will enable [people] to do better in their life.”

He offered this example:

While serving his first call in Wilcox County, Alabama — at the time the 18th poorest county in the nation — Reese was minister to, among many others, a group of about 30 young baseball players who were in the habit of knocking on his door at 4 o’clock every afternoon to say, “Reverend, let’s go down and practice.”

Reese would drive them to the diamond in the back of a school truck and then lead the practice, even though baseball hadn’t been his sport growing up.

One day the dean of the school the players attended asked Reese to estimate what it would cost to purchase a uniform for each player. “I don’t know, but I’ll find out,” Reese told her. He did the research and quoted her a price, and she had a check issued. The next day, Reese and two players drove more than two hours north to Birmingham, where they purchased 36 new uniforms in three sizes, distributing them to each player upon their return.

“To see the joy on their faces when they put on those uniforms!” Reese told Hinson-Hasty. “It was the most wonderful feeling.”

Reese said another joy of ministry for him was “helping groups become alive, whether they’re baseball players or a session trying to figure out how we are going to get around a particular issue that’s demeaning to us as African Americans. It’s people who really light me up, and I stay with a group as long as they feel I can be of service and help to them.”

“Helping people come alive,” replied Hinson-Hasty. “That feels like a definition of what ministry is all about.”

It’s a little like moderating a session, Reese told him.

“You are a facilitator,” he said. “The more people that you help, the better your ministry is going to be. If you think you’re going to do it all yourself, that’s exactly what you’ll end up doing.”

Reese also spoke of his time working as an educational consultant with the former Synod of Catawba, which was an African American synod of about 125 churches based in North Carolina. After helping develop some new Sunday school curriculum, Reese determined he wanted to use people who taught, for example, second grade to teach other teachers how to teach second-graders using the new curriculum. “They taught it with experience,” he said, calling it one of the accomplishments he feels “good and joyful about” over his many years of ministry. “There’s no one better to teach you how to teach second-graders than some who teaches second-graders,” he said.

During his 24 years working for the Presbyterian Foundation — he retired in December 2019 at the age of 95 as the Minister of Specialized Interpretation — one of his “true joys” was “to bring to the whole church the gifts that other racial groups had to give to the church. These gifts are many and continuous. If I had a word to charge us, I’d say look forward to having relations across racial lines, because God has given all of us an opportunity … this is the gift of God to each of us, and this is the gift we can pass on to the people we know.”

Not surprisingly, Reese said he continues to learn even in his retirement.

“As much knowledge as you can get will not hurt you,” he said. “People see [preachers] standing in front of them and they expect you to know more about what you’re about to say than they do. It’s tragic if you don’t know more than the people you’re teaching.”

“One thing I always looked for,” he said, “was how much more can I learn about what I know. It made me a good student.”