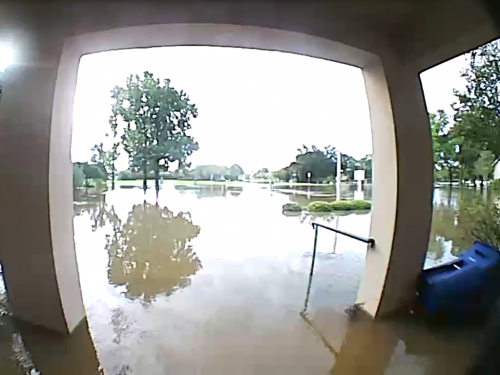 LOUISVILLE – Record flooding over the weekend in parts of Louisiana has left thousands homeless and as many as a half dozen people dead. The Presbytery of South Louisiana says the heavy rains with as much as six to 10 inches, took everyone by surprise.

“The area impacted by the flooding is immense. Record rainfall in a very short period of time,” said Tom Tucker, treasurer and assistant stated clerk for the presbytery. “Rivers are cresting four to five feet higher than they’ve ever crested before. In some cases, the rivers are 10 to 12 feet above flood stage and that covers a lot of area.”

Tucker says four parishes are severely impacted and four others are just now beginning to feel the effects.

“These include vast areas that have never been flooded before, no history of flooding and were not on any flood plain map,” said Tucker. “We’re not talking six or eight inches but three, four or six feet of water.”

The heavy rains began on Friday and continued into Saturday according to the National Weather Service. Drier weather prevailed on Sunday, but emergency management officials have urged residents to stay in their homes if they can and off the roads. Authorities say Livingston Parish was among the hardest hit with some towns virtually cut off from the outside world.

“We have a door camera connected through our office computer system. Our office manager accessed the camera from her home computer and one image showed at least six inches outside of the Presbytery office,” said Tucker. “We won’t know for sure how much got into the office until we are able to access it in a couple of days but it could be one to four feet.”

Tucker says one of the biggest problems has been finding shelter for the thousands of people that have been evacuated. Most of the shelters built for hurricane evacuation are underwater he says and some people have had to move two and three times over the past few days.

“Celtic Studios in Baton Rouge has huge sound stages that are currently not being used and they’ve offered the whole facility for shelter,” said Tucker. “We know there are at least 20,000 displaced people and about 10,000 are currently in shelters. New shelters are opening as we speak.”

Tucker says LSU has converted its basketball arena into a medical evacuation site.

“Those who need constant medical care such as dialysis or other issues are being sent there,” he said. “This is so traumatic for them, so I will be going there over the next few days to provide pastoral counseling.”

Jim Kirk, who just assumed duties as the new associate for domestic response with Presbyterian Disaster Assistance, reached out to leadership staff with the presbyteries of both South Louisiana and Mississippi.

“We have let presbytery leadership know that PDA is ready to help and have sent them information on grants and other resources,” he said. “We can work to provide additional support once we know the extent of damage.”

Kirk says the PDA Call Center often hears from groups that have the time and expertise to go to a disaster site immediately.

“We can’t set up host sites that quickly. There needs to be a discerning process,” he said. “However, we have a partner in Washington Parish that is working to orchestrate teams that have the capability of helping now.”

The group, Washington Emergency Recovery Ongoing Cadre (W.E.R.O.C.), focuses on the needs of residents within Washington Parish. The weekend floods have nearly exhausted the organization’s resources. The group has spent the past three months helping get people back into their homes from March flooding.

“Now we’re back to square one. We spent all of the funding we had to take care of the needs from the last flood including replacement of furniture and appliances,” said Joe Kelley, CEO of W.E.R.O.C. “We’re trying to find funds to get these folks back to their homes again.”

Kelley says the biggest problem will be the emotional and spiritual counseling needed for those who are now going through this a second time in as many months.

“We’re working to get volunteers to come down to assist with mucking efforts. Some groups are sending supplies,” he said. “We are starting to assess the damage in Washington Parish, but a lot of areas are inaccessible. Interstates are messed up and it is difficult to get from one area to another.”

State officials say more than 1,700 rescue personnel have been mobilized and approximately 170 high-water vehicles are being used to evacuate residents. Additional national guard deployments are expected.

Donations to PDA’s flood response efforts can be made at https://pma.pcusa.org/donate/make-a-gift/gift-info/DR000191.