Darrell Guder, Lib Caldwell will be honored during General Assembly 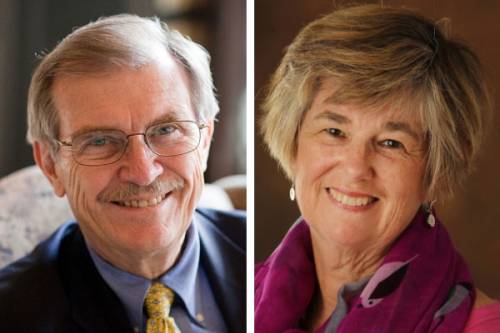 The Rev. Dr. Darrell Guder and the Rev. Dr. Lib Caldwell have been selected to receive the Award of Excellence in Theological Excellence. They’ll be honored during next year’s General Assembly.

LOUISVILLE — Two outstanding leaders in theological education will be honored at the Presbyterian Church (U.S.A.) 224th General Assembly in Baltimore in June 2020.

In addition to both COTE and the Theological Education Fund jointly honoring Guder and Caldwell, they will ask the 224th General Assembly to do so.

“I am so thrilled over the selection of Professors Darrell Guder and Lib Caldwell as the latest recipients of the Award of Excellence in Theological Education,” said Rev. Dr. Ted Wardlaw, President of Austin Presbyterian Theological Seminary. “They both represent high-water marks with regard to lifetime commitment to their seminary settings and the cultivation of students, graduates, scholars, and church leaders too numerous to name or count. They deserve this award, and they inspire us!”

Rev. Dr. Darrell L. Guder is the Henry Winters Luce Professor of Missional and Ecumenical Theology Emeritus and one of the founders of the Center for Church Planting and Revitalization at Princeton Theological Seminary. Rev. Dr. Elizabeth (Lib) Caldwell is a visiting professor at Vanderbilt University Divinity School. For 30 years, she served as the Harold Blake Walker Professor of Pastoral Theology and Associate Dean of Students and Academics at McCormick Theological Seminary.

Rev. Dr. Lee Hinson-Hasty, senior director of funds development for the Theological Education Fund at the Presbyterian Foundation, noted that the award is the highest honor in the PC(USA) for those who teach, lead, and support theological education. “In the life of the Presbyterian Church, only 16 other leaders have received this honor,” Hinson-Hasty says. “This award is reserved for those who have made significant and transformational contributions to the mission and life of the Church through their service in theological education. Both Darrell and Lib have mentored generations of ministerial leaders across the Church and world while raising the bar for scholarship and research at theological institutions and broadened the impact that seminaries have on the world around them. We are all grateful for their contributions.”

For more information about each honoree, please read their biographies below.

“‘Missional theology’ is now a commonplace term in the church and academy, and Dr. Guder is the pioneer of this body of work. His fundamental conviction that the church does not exist for its own sake but rather to equip disciples of Jesus to go forth in faithful service to God’s mission in the world is at the heart of all his work. Hand-in-glove with his insistence on doing theology “missionally” is his critique of western Christendom, which he understood as the complacency of the church within societies that stems from having cultural power and privilege. With great urgency, Dr. Guder wanted to rouse the North American church from its comfortable slumber and enliven it to recapture the “apostolic” message of the New Testament — that Jesus calls disciples in order to “send” them into the world in his service. As a result of his influence, the attempt to be “missional” is a priority for congregations throughout North America. The impact of his work goes beyond the academy into the actual practices of congregations, which is the greatest testament that can be offered to the significance of someone’s theological achievement.”

After three years of study at the University of California at Los Angeles, Guder transferred to the University of Hamburg, Germany, where he completed his PhD. He was ordained to a Lutheran call in Germany by the Presbytery of Los Angeles of the United Presbyterian Church (U.S.A.). He holds two honorary degrees: a Doctor of Divinity from Jamestown College and a Doctor of Divinity from Whitworth University.

Elizabeth Francis Caldwell served on the faculty of McCormick Theological Seminary from 1984 to 2014, teaching in the field of Ministry where she was the Harold Blake Walker Professor of Pastoral Theology and Associate Dean for Students and Academics. She has published in the area of Faith and Families.  Her most recent book is “God’s Big Plan” (Flyaway Books, 2019), a children’s book written with Theodore Hiebert.  After retiring from McCormick in 2014, she is enjoying adjunct teaching at Vanderbilt University Divinity School, writing and consulting on a new companion curriculum for “Growing In God’s Love, A Story Bible.” Her book, “I Wonder, Engaging a Child’s Curiosity About the Bible” (Abingdon Press, 2016, 2020) focuses on the ways we can engage children and parents in reading the Bible in new ways.

“For many in the church and theological education, Lib is perhaps best known for her work with children and the teaching of the Bible to children — and deservedly so. But, Lib Caldwell’s work as teacher and scholar transcend age and classroom. She is one of the very few people in theological education whose teaching and writing has reached and touched not only children, their parents, and Sunday school teachers, but pastors, church leaders, scholars, theologians, and more than one seminary president.”

Longtime McCormick colleague and Professor Emeritus Dr. Ted Hiebert worked side-by-side with Caldwell on a new translation of the Bible, the Common English Bible. He says:

“Lib and I worked together as editors of the Common English Bible, the only new translation of the Bible in the last 30-40 years, Lib as one of the Readability Editors and I as one of the Old Testament Editors. The aim of this translation was to make accessible in the English people speak today (rather than the “biblish” that tends to characterize Bible translations) the best critical contemporary biblical scholarship, and it drew on the most diverse set of translators ever.  Lib’s task was to make sure translators were communicating in the language people use and understand, and she was masterful at her task. In fact, this ability to translate theological ideas into the worlds of her students and into the world at large is Lib’s hallmark as an educator.”

Previous Recipients of the Excellence in Theological Education Award are listed below.

Robyn Davis Sekula is Vice President of Communications and Marketing at the Presbyterian Foundation. You may reach her at robyn.sekula@presbyterianfoundation.org or (502) 569-5101.