Amid the suffering, hope shines through in blast-affected Beirut 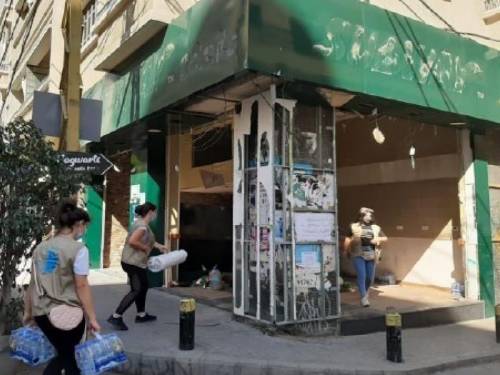 The Joint Christian Committee located and settled in the Mar Mikhael neighborhood in Beirut, Lebanon, where they cleared out the debris, set up base and offered help. (Photo from the JCC newsletter)

LOUISVILLE — In February, the Rev. Elmarie Parker left her home in Beirut, Lebanon, to attend meetings in the U.S. She was not able to return until August 20. The Lebanon she returned to was very different than the one she left.

Parker is World Mission’s regional liaison for Syria, Lebanon and Iraq. In the seven months she was gone from her church partners and her husband, Beirut had suffered through the pandemic and an explosion on August 4 in the port area of the city. Officials say the force of the explosion was 20% as powerful as the atomic bomb dropped by the United States on Hiroshima, Japan, on Aug. 6, 1945.

Both the pandemic and the blast have exacerbated the daily struggles facing the Lebanese people. But as the calamities continue to pile up, hope remains the people’s anchor, according to Parker.

“As I’ve reconnected with partners and friends, there are two themes I regularly hear,” she said. “One is the Arabic phrase, ‘shway shway.’ It conveys various nuances of ‘bit-by-bit’ or ‘step-by-step.’ This is how people here are making it from one day to the next. I call it, ‘grace enough for the day.’”

She quoted Rev. Joseph Kassab, general secretary of the National Evangelical Synod of Syria and Lebanon, a PC(USA) global partner.

“We are really occupied with the people — how we can help them survive. The whole church is in the stage of survival, unfortunately. As if this is the fate of the Christians in the Middle East. But the role of the church in such time is to inject hope into the lives of people against despair, against darkness. And this is what we are trying to do. The church cannot generate love from itself, herself, we reflect the love we experience with Jesus. We are salt only if he salted us; we are hope only if he gave us hope; we are light if he enlightened our life. He is the source of our energy to do what we are called to do in this part of the world.”

Old grudges, feuds and differences have been set aside and help has come from unexpected places, including the young adults from Dbayeh Christian Palestinian Camp. This story was shared from the Joint Christian Committee newsletter, a PC(USA) partner: 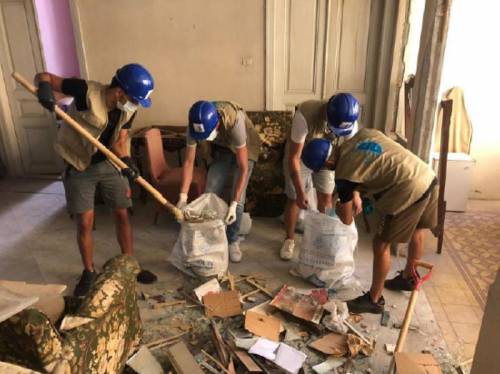 “Young eyes turned to Elias Habib. The Joint Christian Committee (JCC) Youth Leader looked at about 20 youths standing before him. Shock was written all over their faces. Their hillside mountain Palestinian residences, known as the ‘Dbayeh camp,’ shook with the blast that ravaged Beirut’s port and its surroundings when a large amount of ammonium nitrate, stored at the port, exploded on August 4. Over 180 people died, 6,000 were injured, and an estimated 300,000 homes were heavily damaged. News soon reached them, however, that the explosion took place at the port. In less than an hour, Habib was already calling on his youth group to get ready. “Brooms, gloves, masks,” he mentally listed …. Habib paused. As a foreman on many construction sites and as someone who grew up in the vicious Lebanese 16-year civil war, Habib could forecast what awaited them. But this youth group, aged from 16 to 24, had yet to see such ferocious destruction or, even worse, feel the misery of hurt ones.

“Nevertheless, a few days later, the JCC located and settled in a small destroyed restaurant in the Mar Mikhael neighborhood — just one of several areas in the Ashrafieh region affected by the blast. They cleared out the debris and set up base. They soon joined the hundreds of volunteers who descended to the devastated areas, sweeping glass shards, setting aside torn doors and windows, and scrubbing blood off walls and floors. Since Lebanese government officials were absent in the field, it was up to the volunteers to help the distraught victims and salvage whatever they could from the debris. It was an overwhelming and emotional task.

“Day after day, the JCC group put up nylon sheets across windows and balcony doors and hauled down the stairs hundreds of bags filled with debris … But there was more than that. They were Palestinians (albeit Christians) — a word which, for years, brought contempt in many Christian circles. Indeed, many massacres and battles were committed by both groups against each other — Christian and Palestinian militias — during the Lebanese civil war. Habib’s father was severely injured during such fighting. Habib himself fled from area to area to escape the clashes.

“The JCC Palestinians were too young to realize the irony: They were aiding the very people who once upon a time were the enemies of their parents and grandparents.

“‘You are Palestinians?’ said one older woman, as the group hauled out the debris from her home. ‘And from the camp?’ Habib nodded slowly. The JCC youngsters looked oblivious to the question. They smiled cheerfully. The woman looked at the youths. ‘The government hasn’t been to ask about me,’ she said. ‘They didn’t come to clean my home and help me. But you did.’ She paused, then looked at Habib. ‘Curse the war,’ she said. ‘You are my brother.’”

Parker said that multiple calamities face many of communities — certainly here in the Middle East, but also in the United States.

“Our partners here regularly ask how you all are doing,” said Parker. “In the midst of all they are facing, they continue to stand in prayerful solidarity with you. As the hymnist wrote, ‘When all around my soul gives way, Jesus is then my hope and stay (Edward Mote).’ May all of our anchors “hold within the veil” as we each seek to embody Christ’s hope to those around us.”